The best science fiction and fantasy books tell a great story and have a greater message. In this edition of Book Beat, I review a couple of terrific books with really smart comments about current issues. Don’t miss these books!

The Belles by Dhonielle Clayton 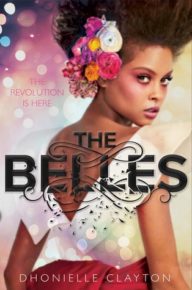 Pitch: The launch of a lush, dark, opulent gothic fantasy about a world where appearance is everything

Story: Camellia Beauregard is a Belle. In the opulent world of Orléans, Belles are revered, for they control Beauty, and Beauty is a commodity coveted above all else. In Orléans, the people are born gray, they are born damned, and only with the help of a Belle and her talents can they transform and be made beautiful.

But it’s not enough for Camellia to be just a Belle. She wants to be the favorite—the Belle chosen by the Queen of Orléans to live in the royal palace, to tend to the royal family and their court, to be recognized as the most talented Belle in the land. But once Camellia and her Belle sisters arrive at court, it becomes clear that being the favorite is not everything she always dreamed it would be. Behind the gilded palace walls live dark secrets, and Camellia soon learns that the very essence of her existence is a lie—that her powers are far greater, and could be more dangerous, than she ever imagined. And when the queen asks Camellia to risk her own life and help the ailing princess by using Belle powers in unintended ways, Camellia now faces an impossible decision.

With the future of Orléans and its people at stake, Camellia must decide—save herself and her sisters and the way of the Belles—or resuscitate the princess, risk her own life, and change the ways of her world forever.”

Quick take: Inclusive and complex, the world of The Belles is deep and treacherous. There are lots of great images and dark, nasty turns. It’s a commentary on the price of beauty, objectification, and more. This book only scratches the surface of this world so I can’t wait to read more!

PS. I am in dire need of a teacup lion (or tiger)! Let me know where I order one! 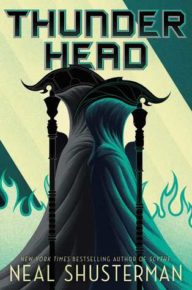 Pitch: The second book in master storyteller Neal Shusterman’s series which asks: What if utopia isn’t that great?

Story: “Rowan and Citra take opposite stances on the morality of the Scythedom, putting them at odds, in the second novel of the chilling New York Times bestselling series from Neal Shusterman, author of the Unwind dystology.

Rowan has gone rogue, and has taken it upon himself to put the Scythedom through a trial by fire. Literally. In the year since Winter Conclave, he has gone off-grid, and has been striking out against corrupt scythes—not only in MidMerica, but across the entire continent. He is a dark folk hero now—’Scythe Lucifer’—a vigilante taking down corrupt scythes in flames.

Citra, now a junior scythe under Scythe Curie, sees the corruption and wants to help change it from the inside out, but is thwarted at every turn, and threatened by the ‘new order’ scythes. Realizing she cannot do this alone—or even with the help of Scythe Curie and Faraday, she does the unthinkable, and risks being ‘deadish’ so she can communicate with the Thunderhead—the only being on earth wise enough to solve the dire problems of a perfect world. But will it help solve those problems, or simply watch as perfection goes into decline?”

Quick take: There are so many relevant points about class, religion, conservatives and progressives, corrupt leaders, yet it is a fascinating fantasy adventure. A very deft balance of characters, plot and ideas, this is such a unique story, executed by a terrific storyteller. 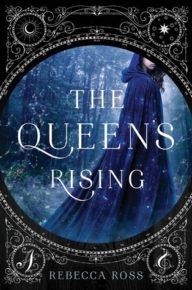 Pitch: A new, sprawling fantasy series with a rich history and a mysterious girl with a vital role to play

Story: “When her seventeenth summer solstice arrives, Brienna desires only two things: to master her passion and to be chosen by a patron.

Growing up in the southern Kingdom of Valenia at the renowned Magnalia House should have prepared her for such a life. While some are born with an innate talent for one of the five passions—art, music, dramatics, wit, and knowledge—Brienna struggled to find hers until she belatedly chose to study knowledge. However, despite all her preparations, Brienna’s greatest fear comes true—the solstice does not go according to plan and she is left without a patron.

Months later, her life takes an unexpected turn when a disgraced lord offers her patronage. Suspicious of his intent, and with no other choices, she accepts. But there is much more to his story, and Brienna soon discovers that he has sought her out for his own vengeful gain. For there is a dangerous plot being planned to overthrow the king of Maevana—the archrival kingdom of Valenia—and restore the rightful queen, and her magic, to the northern throne. And others are involved—some closer to Brienna than she realizes.

With war brewing between the two lands, Brienna must choose whose side she will remain loyal to—passion or blood. Because a queen is destined to rise and lead the battle to reclaim the crown. The ultimate decision Brienna must determine is: Who will be that queen?”

Quick take: The book begins with tons of maps and lineages so there’s a deep history to explore. Even with so much world-building, this intriguing book moves swiftly which is refreshing. A promising new series! 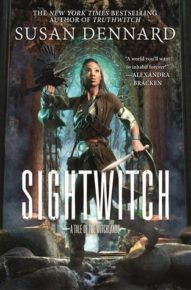 Pitch: A Witchlands novella that gives hints on the future and the past

Story: “Set a year before Truthwitch, Sightwitch follows Ryber Fortiza, the last Sightwitch Sister as she treks deep underground to rescue her missing best friend. While there, she encounters a young Nubrevnan named Kullen Ikray, who has no memory of who he is or how he wound up inside the mountain. As the two journey ever deeper in search of answers, and as they brave one close call after another, a tentative friendship forms between them—one that might one day grow into something more.

Sightwitch is told through Ryber’s journal entries and her sketches, as well as through supplementary materials (such as other journals, pieces of songs, clippings from history books, flashbacks, etc.). Though meant as a companion novella, this story serves as a set up to Bloodwitch as well as an expansion of the world.”

Quick take:  If you haven’t read Truthwitch yet, make sure you start with that one. This novella covers a lot of ground with backstory on Ryber and Kullen, a history lesson on how magic came to the Witchlands, a sweet thousand year old tale of one of the most powerful Sightwitches and a glimpse of the future via some prophecies. Oh yeah, there’s also a rather spooky story where Ryber goes to save her Threadsister. 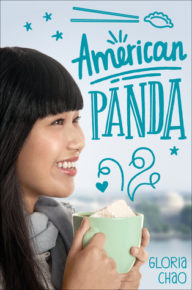 Pitch: Contemporary YA story about a girl who is trying to find the courage to either follow her parents wishes or to follow her heart

Story: “An incisive, laugh-out-loud contemporary debut about a Taiwanese-American teen whose parents want her to be a doctor and marry a Taiwanese Ivy Leaguer despite her squeamishness with germs and crush on a Japanese classmate.

At seventeen, Mei should be in high school, but skipping fourth grade was part of her parents’ master plan. Now a freshman at MIT, she is on track to fulfill the rest of this predetermined future: become a doctor, marry a preapproved Taiwanese Ivy Leaguer, produce a litter of babies.

With everything her parents have sacrificed to make her cushy life a reality, Mei can’t bring herself to tell them the truth–that she (1) hates germs, (2) falls asleep in biology lectures, and (3) has a crush on her classmate Darren Takahashi, who is decidedly not Taiwanese.

But when Mei reconnects with her brother, Xing, who is estranged from the family for dating the wrong woman, Mei starts to wonder if all the secrets are truly worth it. Can she find a way to be herself, whoever that is, before her web of lies unravels?”

Quick take: Anyone whose parents wanted them to walk a specific path can relate to Mei’s story. Funny and sad, painful and happy, this is also a story about cultural assimilation, generational differences and more. Sure Mei’s parents are a bit extreme, but there are parts of her story that we can all relate to. 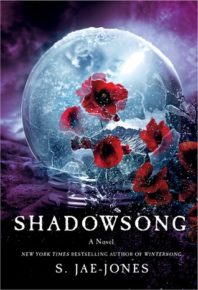 Pitch: The sequel to Wintersong with a very different focus

Story: “Six months after the end of Wintersong, Liesl is working toward furthering both her brother’s and her own musical careers. Although she is determined to look forward and not behind, life in the world above is not as easy as Liesl had hoped. Her younger brother Josef is cold, distant, and withdrawn, while Liesl can’t forget the austere young man she left beneath the earth, and the music he inspired in her.

When troubling signs arise that the barrier between worlds is crumbling, Liesl must return to the Underground to unravel the mystery of life, death, and the Goblin King—who he was, who he is, and who he will be. What will it take to break the old laws once and for all? What is the true meaning of sacrifice when the fate of the world—or the ones Liesl loves—is in her hands?”

Quick take: If you liked Wintersong (and yes, you need to read that before reading Shadowsong,) then you’ll enjoy this return to this fantasy world filled with music. However, this book feels quite different. There’s a romantic and non-romantic love triangle as Liesl is trying to figure out what happened to her beloved brother all the while second-guessing her decision to leave the Underground while missing the Goblin King. 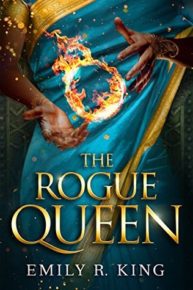 Pitch: The third book in this fantasy series that began with Hundredth Queen

Story: “Despite the odds, Kalinda has survived it all: Marriage to a tyrant. Tournaments to the death. The forbidden power to rule fire. The icy touch of a demon.

That same demon now disguises itself as Rajah Tarek, Kalinda’s late husband and a man who has never stopped haunting her. Upon taking control of the palace and the army, the demon brands Kalinda and her companions as traitors to the empire. They flee across the sea, seeking haven in the Southern Isles.

In Lestari, Kalinda’s powers are not condemned, as they are in her land. Now free to use them to protect those she loves, Kalinda soon realizes that the demon has tainted her with a cold poison, rendering her fire uncontrollable. But the lack of control may be just what she needs to send the demon back to the darkest depths of the Void.

To take back the empire, Kalinda will ally with those she distrusts—and risk losing those most loyal to her—to defeat the demon and bring peace to a divided nation.”

Quick take: Happily, this book changes things up without a single tournament anywhere. This time it’s about getting political alliances aligned and taking down the Voider in a people-of-Middle-Earth-unite-type battle. So definitely some good things here even if I still haven’t warmed up to Deven (and half the book is from his POV).

Thanks to Disney Hyperion (The Belles), Simon & Schuster (Thunderhead, American Panda), HarperCollins (The Queen’s Rising), Tor (Sightwitch), Wednesday Books (Shadowsong) and Skyscape (The Rogue Queen) for providing the books for review. Want more details on my impression of these and other books? Check out my ratings and full reviews at Goodreads. 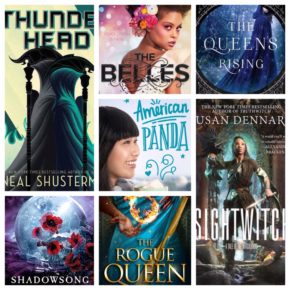