Home / Fanboying! / CB is Out and About for Scream 4 Star Emma Roberts! Boxing Legend Sugar Ray Leonard and… John Krasinski? 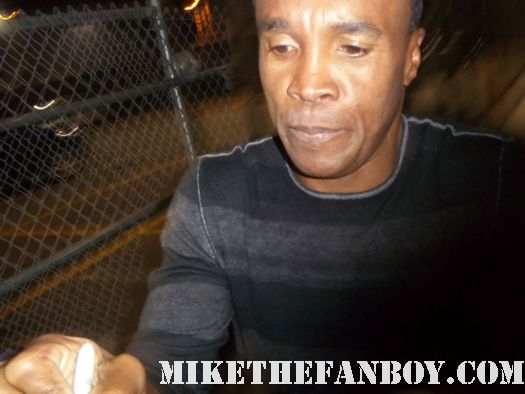 I have created a monster. I think I really have… ah well, what can you do? Lol… CB is out and about again. This time for Ms. Emma Roberts star of Scream 4 and Valentine’s Day. While waiting for Emma Roberts… Who does he run into? Only boxing legend Sugar Ray Leonard? Say Wha!

NANANANAN, CB, CB CB!!!! Hey everyone, it’s your favorite mikethefanboy.com contributor, yours truly, CB! I narrowly avoided a sharpie to the eye by Mike, and I’m out and about. Today I decided to go for Emma Roberts. She was super nice at the Scream 4 premiere, but I had a photo for her and a spare poster of “Its kind of a Funny Story”. I was contemplating going as I got the same poster signed at the premiere, but decided to get this one signed and send it to Zach too see if he signs it. Morgan Spurlock is also on. I enjoy most his documentaries and really wanted to meet the guy. It should be a fun peaceful day as there are several events going on and most the dealers will be somewhere else. Well, let’s see what happens.

4:00: I’m walking back from printing up my 4X6 Morgan Spurlock photos and I see this guy on the street. I stop and pause and say to myself, that guy looks ALOT like John Krasinski. OMG, it really is him. I ask him, “Are you John Krasinski?” he says “yes” and I ask to take a photo with him, and he obliges. COOL! Already worth the trip!

4:30: I just got told Morgan Spurlock is not taping today!!! BUMMER!

4:45: I just received a text from Mike saying where my most wanted celeb is going to be in a few weeks. I think I gave such a loud scream they heard me eight towns over. I am super, SUPER STOKED to get this info and I call already see Mikes expression, “Really dorkus?”…Yes, REALLY!!!

5:30: We see security moving and they set up the barricade. There is a limo behind us and its Emma Roberts. We chant for her and she waves and smiles, but we don’t go to her car. She parks and she’s heads right in. She’s not dressed so I kinda figured she wasn’t coming over. Long wait now.

6:00: Two people head over to staples center to catch people at the laker game. I’m not trying to miss Emma, so I decide to stay.

7:00: I just got notified Sugar Ray Leonard is going to be here. I grew up around boxing and Sugar Ray is the MAN! He is widely considered one of the best pound for pound fighters of all time. So yes, he’s a big deal to me. I remember watching repeats of his fight with Roberto Duran and of course, you have the infamous “No Mas” fight. Sadly, I did not know he was going to be here, and I have nothing for him!

7:01: CB senses just kicked in! There is a store that sells boxing gloves in the area! CB senses jump into hyper-drive and like a ninja I make a mad dash to the store to buy a pair of gloves.

(Editors Note: CB Almost got away unscathed without a comment from me. However, when he talks about CB the ninja… His Ninja prowess goes something like this… Mike says in a low hushed tone… “Hey for some reason you want Paul Walker and he’s going to tape a talk show.” CB replies shouting “PAUL WALKER IS GOING TO TAPE A TALK SHOW ON APRIL 19 2011 ON THE CORNER OF HOLLYWOOD AND VINE! EVERYONE LET’S GO!” Kills me… KILLS ME! –Mike)

7:10: CB has arrived to the store and only sees two pairs of gloves, and one pair is two lefts! NO NO NO NO! I quickly select the best gloves of the two sets, and checkout and head back.

(Editor’s Note: Referring to yourself in the third person makes you sound like a douche… Just saying. 🙂 –Mike)

7:15: I had to go to the bathroom and went to the burger joint for a pee and shake…

7:20: I arrive back and Anushika is shocked by my ninja speed, but I just didn’t want to miss anything.

(Editor’s Note: With a high degree of certainty I don’t think Anushika was shocked by your Ninja speed! –Mike) 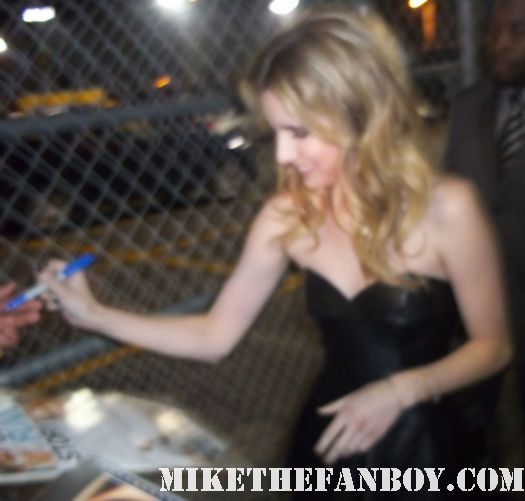 7:50: We see Emma head out and we call for her. There are only about ten people here. Such a small crowd, yet she still comes over. 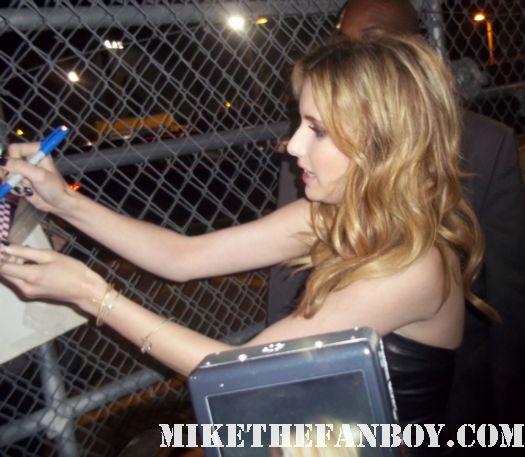 She signs and gets my two items. I’m happy. 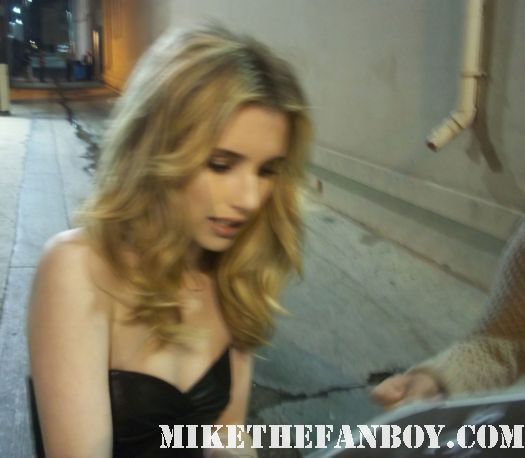 She goes to one side of the barricade to the other. She’s a sweetheart! She waves and leaves. 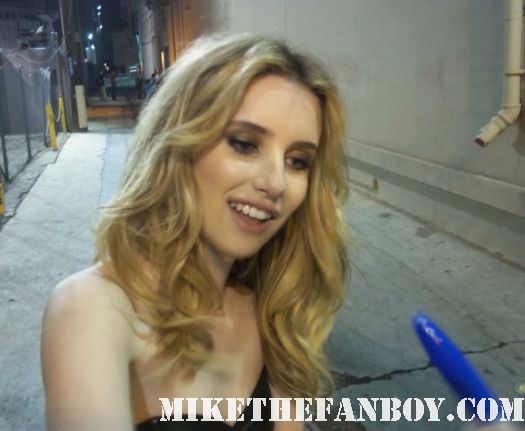 7:55: We see Sugar Ray arrive and he goes right inside… 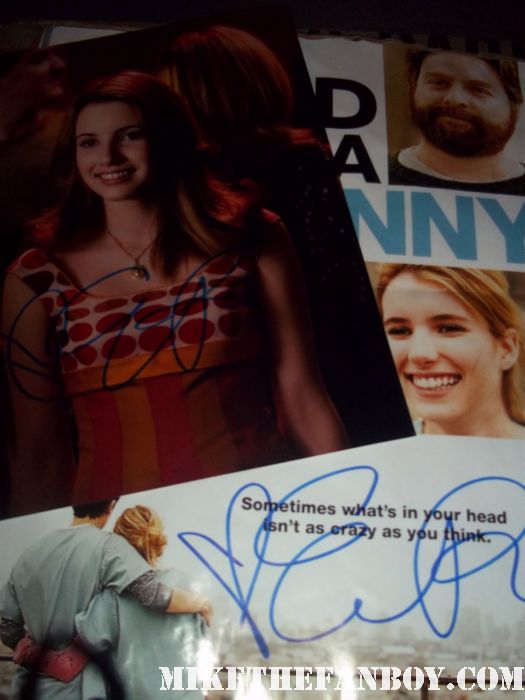 8:20: We see Sugar Ray Leonard leave and we chant for him and he runs over. 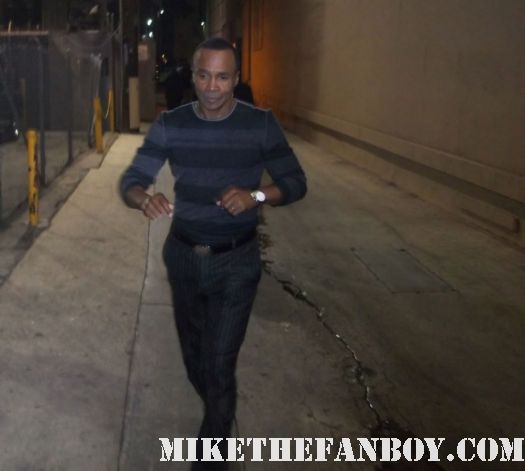 He signs my boxing glove and mitt. 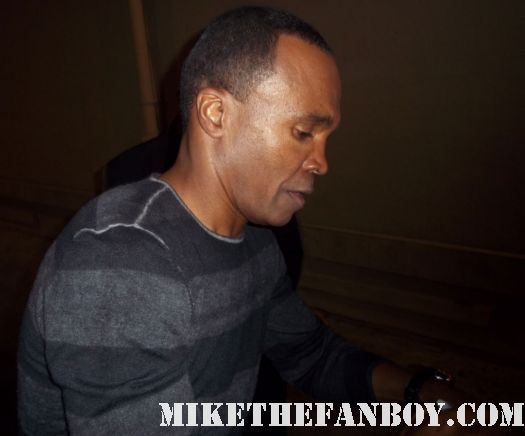 His publicist keeps saying he has to go, but he signs and takes photos! Stand up guy!

WOW!! That’s all I can say, what a great freaking day. I got Jon, I got Emma and really stoked I got Sugar Ray, even though I didn’t know he was going to be here. Until next time, same CB blog, Same CB hour, same CB Channel. KAPPPOOOOOW! 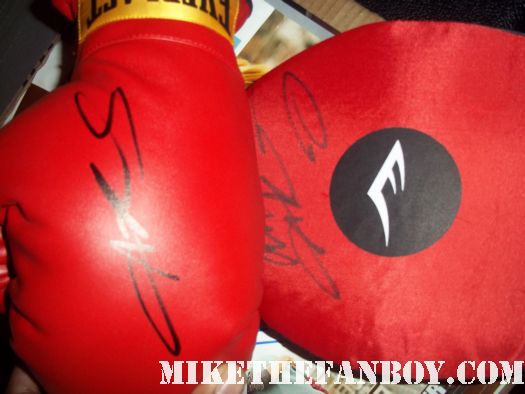