Welcome to the CBC! AKA the Comic Book Crossover!

Jim is doing a great job giving us all the scoop on the latest and greatest in Comic Book happenings! This week Jim is talking some Walking Dead, one of the best shows on the air!

Hello True Believers and welcome back to this weeks newly christened Comic Book Crossover. Over the last several weeks we’ve gone back and forth on this name and some of the loyal Fanboy readers even offered up some great suggestions, well after a lot of deliberation it looks like we’ve finally found it. Comic Book Crossover will be your weekly look at the hot new comics as well as how these books tie into current TV shows and movies and as always I’ll do my best to ad some autograph collecting in there.

This week is a tremendous week for Comics and TV, on Wednesday October 9th Arrow’s season 2 premieres and on Sunday October 13th Walking Dead’s Season 4 kicks off. The biggest of the pair would have to be The Walking Dead. This show pulls in numbers reserved for the Law & Order style regurgitated crap, simply unbelievable.

This show is so big that when the show’s airing the books actually become more valuable, crazy huh? What’s sad though is as big a fan as I am of both the TV show and comic when the Comic debuted 10 years ago this month I passed on it, not just once but for the first year (I know I’m an idiot). With all my buddy’s pestering me on how awesome it was I caved and have been hooked ever since issue 15. Those early issues saw small print runs, I think issue #1 was around 5,000 and issue #2 around 4,000. That’s why today these books are demanding in the $1,000+ range for a comic that originally cost less than $3, not a bad investment.

Now the first 3 seasons of the TV series followed pretty close to the comics. Some changes were made but as we enter season 4 it’s anyone’s guess. You see in the comic The Governor chased Rick and his people out into the great unknown while killing Lori and the baby. This isn’t how things went down last season and Rick and Co. are setting up shop in the prison and even took on what’s left of Woodbury. I’m glad to see the show deviate even further from the Comic, it’s a good way to keep fans of both continuously interested. On the Comic front this week saw 3 Walking Dead comics released. 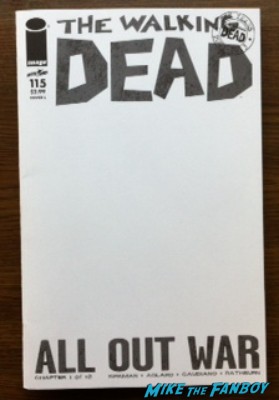 Issue #115 (pictured) is part 1 of a year long battle called All Out War. I’ll keep you all posted on how things go down but if you ever wanted to just jump on to the book this would be the time.

Next up were 2 reprints, the first is the 10-year anniversary of issue #1. This time the book was done in color with the pitch book Robert Kirkman did to sell the book to Image Comics. It’s a fun read and shows how much Kirkman changed the book between then and issue #1. The second reprint is titled Tyreese and reprints key Tyreese moments in the comic. I’m guessing since he’s going to be a more prominent character this season folks might want to know a little more about him.

Now on to another favorite show of mine premiering this week, Arrow. When the CW ended Smallville a couple years back I thought their version of the Green Arrow would be spun off into his own series. They built Justin Hartley’s version of the Green Arrow over many years and it was a lot of fun but as anyone that watches Arrow will tell you this version is Dark Knight dark and so much cooler.

They take the essence of this rich characters history and bring it to the 21st century. There’s not a lot of correlation to the current comic but each character is rooted in DC history. A few months back i got to attend the Arrow event at Wondercon and meet Green Arrow himself, Stephen Amell. At the panel he was fun to listen to and at the signing after he was even nicer to each and every one of his fans. 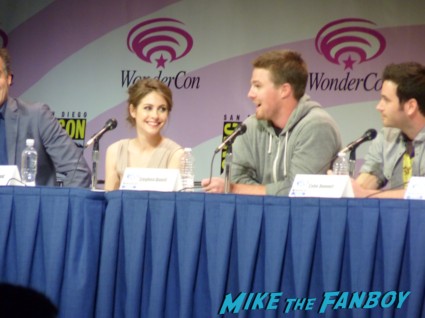 Not only did i get a cast signed poster but I also got an awesome 8×12 (ha ha ha) picture personalized to me and a picture with Oliver Queen himself. 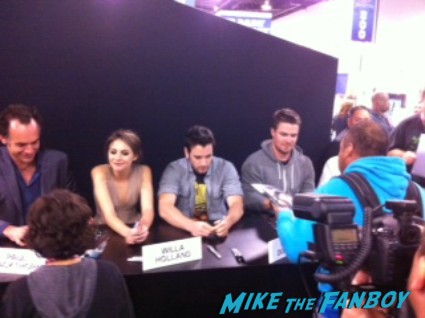 It’s this type of dedication and love for his fans that will make this show last for years to come. 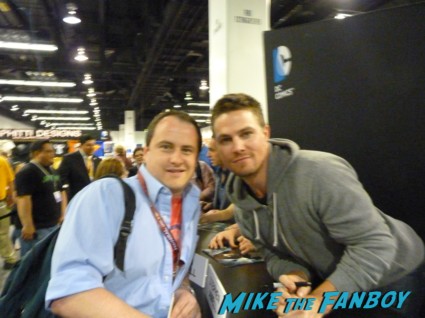 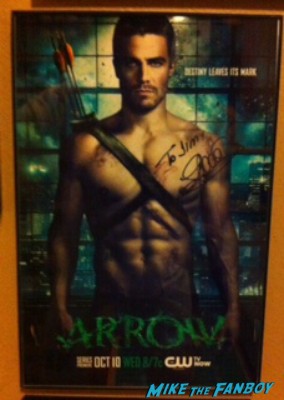 One thing that would benefit DC in the long run is if they take the Marvel angle and work this version of the Green Arrow into their proposed Justice League movie with Henry Cavill and Ben Affleck. Just a thought but if this all took place in the same universe they could really capitalize on the cross promoting while making second tier characters relevant in TV and great back-up in the movies. But what do i know? 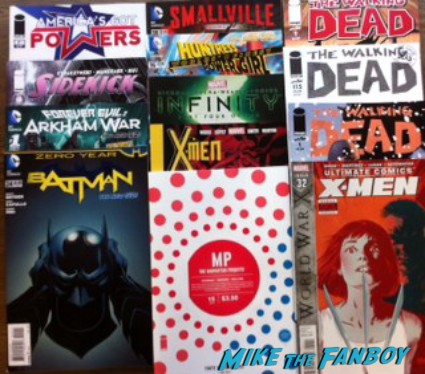 Now on to the massive stack that is this weeks comics. I spent a whopping $45 this week, it actually hurt when I pulled the cash out, physically hurt. The 10th anniversary Walking Dead and the new issue of Batman were double sized so the price was a bit out there. It’s sad to say but a $6.99 comic book is not for kids. Hell even when i was in college i wouldn’t have been able to afford them. Good thing i have a decent job. But as expensive as it is the Batman #24 would be my pick of the week. 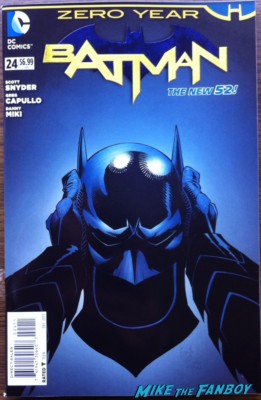 Snyders take on the first year of Batman as well as the fantastic art make this a must buy each month. Other books of note that are out this week, America’s Got Powers #7 of 7, Manhattan Project, Sidekicks and my fun read of the week Smallville. This series is titled season 11 and picks up where the show left off. For Smallville fans this is a good way to keep the story alive. I love it!

Well that’s it for this week, now get out there and buy some comics already!!