Today we are launching a new column here at MTF! Cult Classic Corner! (cue applause) Jack is taking the reins on this one and is going to talk about two things he loves… Movies and meeting celebrities! Duh! Have you read this website before? LOL… Naturally, I think that this is the perfect fit!

This column is going to be about cult classic films…Natch… modern day cult classics, Movies you may or may not have heard of, etc… and then discussing meeting or trying to meet the casts… With successes or failures…cough, cough, Sean Penn. Some will be films you know and love, others you might not know at all. Jack has thrown even this fanboy for a loop with the odd titles he whips out to get signed.

So guys, enjoy the first Cult Classic Corner after the jump!

Hey Bud, Let’s Party! When Mike asked me to start my own column I had reservations. What would I write about? After careful consideration I decided to write about my favorite subject, movies. Not just any movies, but cult classics. As you can guess from the opening line, Fast Times At Ridgemont High is one of my favorite films of all time. 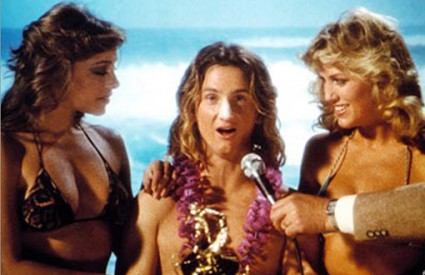 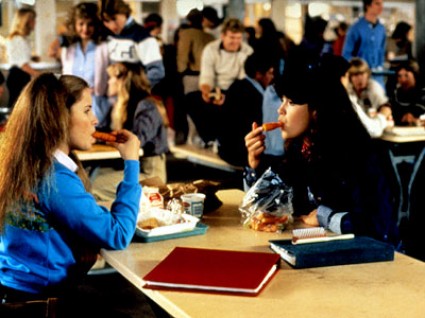 Obviously, everyone remembers Spicoli’s antics and most people wished they could imitate him. Whether it was showing up late to class, degrading your teacher in front of your peers, or one of his many other classic stunts, everyone wants to pull a “Spicoli” because Jeff Spicoli is the quintessential slacker and one of the most iconic characters of all time. 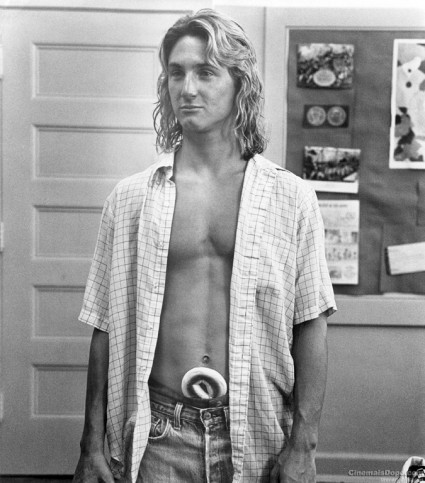 Whether it’s getting caught fantasizing about a crush, being betrayed by a friend, or forgetting your wallet on a date, these realistic situations are hysterical. Although they may be some of our worst nightmares, we vicariously live these moments through the cast of Fast Times. These schadenfreude situations are thoroughly entertaining. 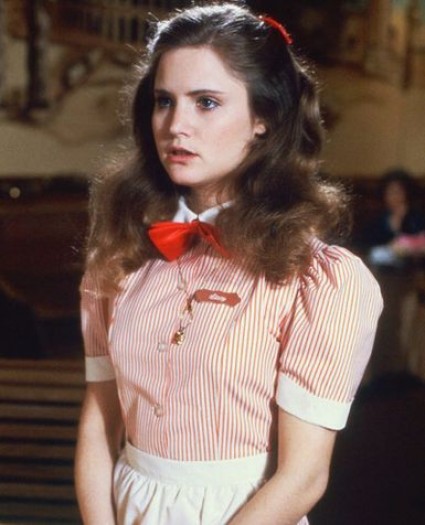 I didn’t reveal any spoilers on purpose so people can discover this 80s masterpiece without anything ruined. Since this is MIKE THE FANBOY I wanted to add the fanboy aspect. Since this is one of my favorite films I have always wanted to meet the cast/crew. Luckily I have had the opportunity to meet four people involved with the film thus far.

As Mike and Pinky have previously mentioned, The Hollywood Show is both a blessing and a curse when meeting former film/TV stars. Although the show provides an opportunity to meet your heroes, you don’t know which version you’ll meet. Foolishly I only started attending the past two years and missed meeting people like Dennis Hopper and Ray Walston before they passed away. Meeting Mr. Hand would have been awesome and the same goes for one of my favorite character actors, Vincent Schiavelli (Mr. Vargas) who died in 2005. Unfortunately, they died before I regularly obtained autographs and attended conventions. So for purists I will never get a “cast” signed piece personally completed. However, I was able to pick up two difficult autographs in non-signing situations.

Owning a unique item can improve obtaining autographs. Before picking up a laserdisc of Fast Times At Ridgemont High I missed Forrest Whitaker at a Q&A for The Last King of Scotland (prior to award season) and haven’t seen him since.

Last year, screenwriter Cameron Crowe did a Q&A after a Harold and Maude screening. 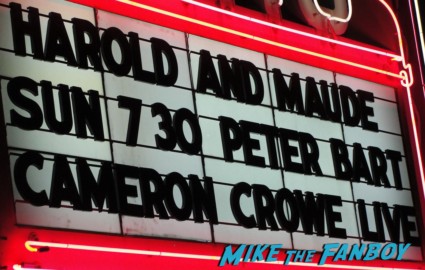 Afterwards, Crowe graciously personalized my laserdisc and Almost Famous DVD. Besides being one of my all-time favorite writers, he is one of the most laidback and nicest people I have ever met. 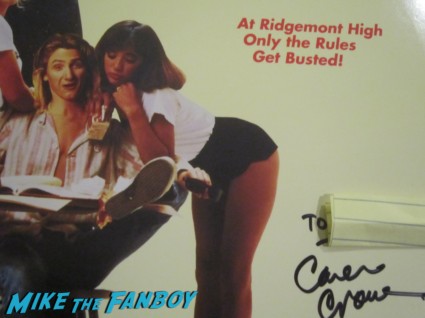 A month later I attended a double feature screening of Clueless and Fast Times At Ridgemont High. What made this particular screening special was I had never seen Fast Times on the big screen and director Amy Heckerling would be making a rare West Coast appearance. Unfortunately, I hit horrible 405 traffic and missed the first few minutes of Clueless. In between the movies, Heckerling conducted a Q&A and gladly signed autographs for fans afterwards. When I presented my laserdisc signed by Crowe, Amy stopped and said, “How did you get, Cameron?” After explaining I met him a month prior, she enthusiastically signed my laserdisc and said “Cameron, should be the only one to personalize this. “ So she simply “added” her signature, quite literally, below Cameron Crowe. 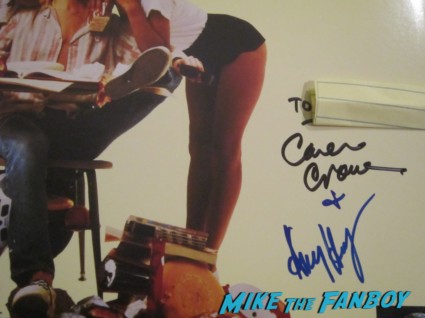 At that moment I decided only the principal cast would be “allowed to sign” the laserdisc. So that meant no Pamela Springsteen, Kelli Maroney, Scott Thompson, etc… It would have to be Judge Reinhold, Jennifer Jason Leigh, Brian Backer, Phoebe Cates, Forrest Whitaker and Sean Penn. If provided with an opportunity to get Nicolas Cage, Anthony Edwards, or Eric Stoltz, I would only bring it out under the right circumstances. (While writing this I would also consider Amanda Wyss –“Lisa” a.k.a. Brad’s girlfriend, D.W Brown –“Ron Johnson”, and James Russo “the convenience store robber,” but again only under the right circumstances).

Besides Crowe and Heckerling I had two more opportunities to meet cast members. The next one I saw was the biggest one of them all, Mr. Sean Penn, who did an ultra rare Q&A appearance for his directorial debut The Indian Runner. Even sitting front row directly in front of him wearing my “Spicoli” shoes (B&W checkered Vans slip ons) didn’t help. Penn had obviously had a few cocktails before the Q&A and immediately left with security blocking everyone. Even though I had a gut feeling he would bolt afterwards I hoped for the best. Still, he is the only cast member I would voluntarily allow and immediately request a personalization from to get it signed.

To this day, Sean Penn, Mel Gibson and Philip Seymour Hoffman are the only three Academy Award winners I have failed to obtain when attempting for autographs. Overall I’m 27 for 30 in opportunities (I have met Steven Soderbergh and Charlize Theron each twice) and have obtained autographs from 25 different Academy Award winners (with a 90 % success rate) including Michel Gondry, Charlie Kaufman, Oliver Stone, George Clooney, Javier Bardem, and Benicio Del Toro. As you can see, I obtained some difficult celebrities including reclusive writer Charlie Kaufman, so it’s hard for me to accept a “difficult” fail.

My final cast member was Robert Romanus, who appeared at The Hollywood Show in February and he was impressed I obtained both Heckerling and Crowe. 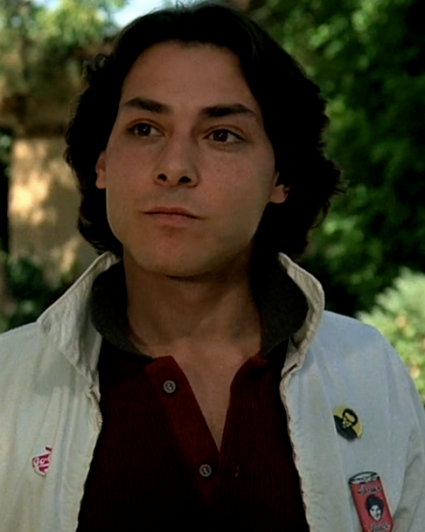 Luckily, he didn’t have a problem not personalizing my item unlike some celebs at the show (cough…Shannon Elizabeth…cough) and liked Amy’s suggestion about the personalization. 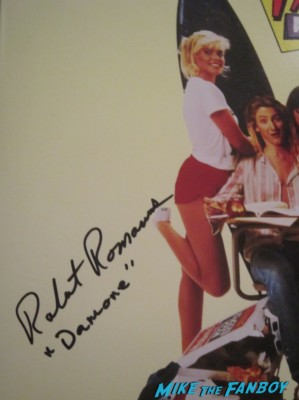 Instead he added Damone and we talked about the film. After a few years, I’m 3 for 4 with attempts.

Hopefully, I can meet more of the cast soon. Until then, happy autograph hunting! 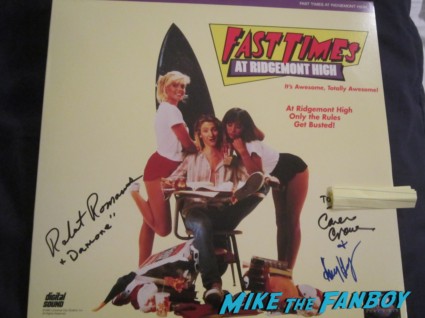