I want candy… I want candy… Sorry, that was slightly off topic wasn’t it? Ah, the Coke Zero has affected my brain again. It happens what can I say? For this weeks Cult Classic Corner, our illustrious Jack has decided to write up a true classic… Candyman!

Okay, I admit I’ve never seen it… (insert booing and cries of disbelief here) And I love horror movies! What the hell is wrong with me? Perhaps I watched Fright Night one too many times instead… Doh!

It is on my list of movies to catch up on… but without further delay… Here’s Jack!

I’ve always wanted to write that!

We Dare You To Say His Name Five Times. Does this tagline sound eerily familiar? Even now these words conjure up gruesome images and give me chills. Back in the 1990s, horror films were “practically dead” to mainstream audiences, but every once in a while a quality film was released like “Scream,” “I Know What You Did Last Summer,” and “Candyman.” The last one in particular, “Candyman,” jumpstarted one of the coolest horror franchises and starred Tony Todd as the menacing titular character. 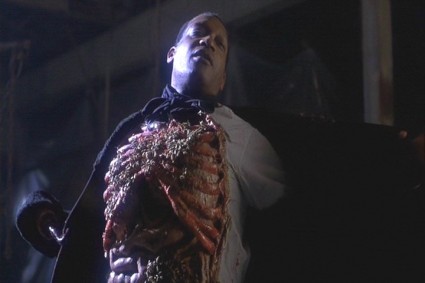 Based off Clive Barker’s short story “The Forbidden,” the film stars Virginia Madsen as Helen Lyle, a graduate student studying urban legends in Chicago writing her thesis paper. During her research, Helen comes across the local legend of Candyman, an artist who had an affair with a white woman and is brutally murdered for his indiscretion. After chasing him down, a mob replaces his hand with a hook and doses honey all over his body before being stung to death by bees (This back story is expanded upon further in the sequel “Candyman: Farewell to the Flesh”). According to legend, if you say his name five times in the mirror, Candyman would appear (and kill whoever summoned him). 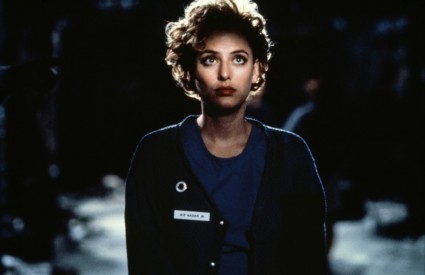 Intrigued by this legend, Helen visits the infamous Cabrini–Green housing project with her colleague Bernadette to investigate a recent unsolved murder linked to Candyman. Initially, Helen dismisses everyone’s reluctant testimony and perceives Candyman to be just another “urban legend” until she starts to personally hear/see him. Sometimes it’s just better to believe certain legends are true. Over 20 years ago, this film genuinely scared me and still persists as an awesome horror film to enjoy. Tony Todd’s intense, fantastic portrayal captured my soul and now I can’t ever say anything into the mirror without thinking of this film. As a result I consider the “Candyman” franchise some of the coolest horror films around (Just avoid the third one if possible). 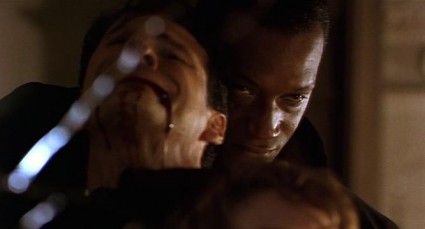 My first non-sports convention I ever attended was the Wizard World convention in Long Beach around the year 2004 (Has it really almost been a decade?) and I didn’t know what to expect. It was a wonderful experience and looking back, it gave me great exposure paying for celebrity autographs. At the show I met “Captain Spaulding” (Sid Haig), Ken Foree (“Dawn of the Dead”), wrestler Rob Van Dam and “Candyman” himself, Tony Todd. I unknowingly attended the show without any collectibles and didn’t know what to expect. So when I came across Tony Todd sitting down I just about stopped in my tracks and said, “You scared the crap out of me when I was a child.” A huge smile came across his face and he gladly extended his hand to meet me. After discussing the trilogy, we agreed there should be more “Candyman” films and I bought a signed 8 x 10. 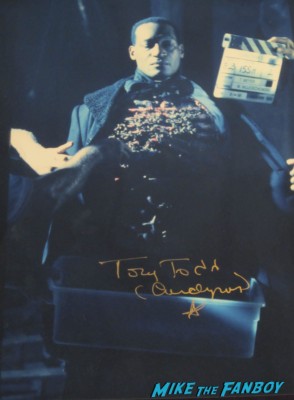 About a year later I met him at Fangoria’s Weekend of Horrors (the same one I first met Bruce Campbell) and had him sign my “Candyman” DVD. Both times I met Tony Todd, he was quite friendly and I genuinely believe horror actors are some of the friendliest people around. 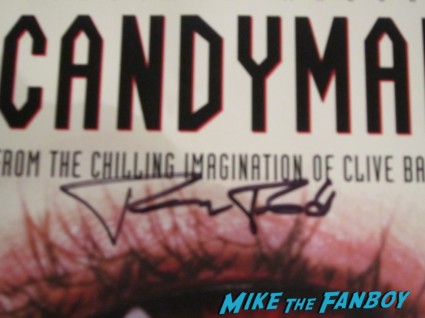 A month later I had the distinct honor of meeting horror icon Clive Barker at the San Diego Comic Con. For those who have never met him, Clive Barker is one of the most gentile, genuine people around and LOVES meeting his fans. Not only did I manage to take a picture with the Master of Horror, but I was able to get three things signed from him including my “Candyman” DVD. 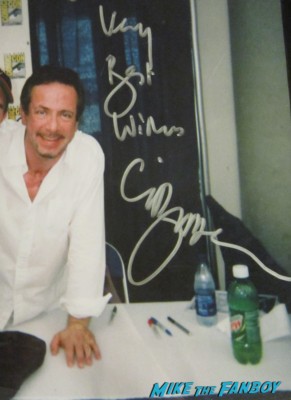 When I told him “The Forbidden” scared the “crap out of me,” he had a large smile on his face and only had nice things to discuss. Clive graciously extended his hand and obliged each and every request made for personalizations, photos, and signing extra items. Years later when I met him at a Dark Delicacies signing, Clive was experiencing throat problems and we were informed “not to ask him questions as he could permanently lose his voice.” However, when I came up and he saw my photo from Comic Con, Clive started enthusiastically talking to me about the photo despite his handlers saying “No” to him. What Mr. Barker showed me was people who truly care about their fans, will always go above and beyond regardless of their condition to please their fans. Celebrities like George Clooney, Johnny Depp, Bradley Cooper, Jessica Chastain, and Kevin Smith fall in this category (I even attended an event where Kevin Smith signed for 10+ hours). So if you love horror and have the chance to meet Clive Barker, go and do it! 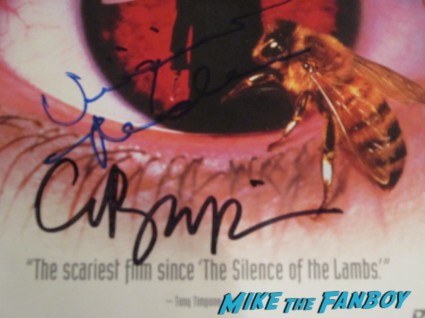 Honestly I was completely content with Clive Barker and Tony Todd on my DVD, but how could I pass up an opportunity to meet Academy Award nominee Virginia Madsen? Unlike some people who recently met her at the Hollywood Show this past weekend I first met Virginia at a poetry reading/signing. Pretty random, right? Not really when you consider both her mother Elaine (an Emmy-award winning filmmaker) and brother Michael (Yes, Mr. Blonde from “Reservoir Dogs”) are poets.

On August 14, 2009, Book Soup hosted a poetry reading and book signing with Elaine Madsen, but the real bonus was Virginia Madsen would also be attending. Having read Mike’s post from his “Mish Mash days”

about Alexander Payne I knew I would be an idiot if I missed another “Sideways” cast/crew member. Sure enough, about a dozen other people had the same idea to attend the book signing to meet Virginia. People brought items from “Dune,” “The Hot Spot,” “Candyman,” “Sideways,” and “Firewall” ranging from posters, laserdiscs, soundtracks to DVDs. I personally brought three items from “Candyman” (DVD) and “Sideways” (Poster and DVD). Sadly, almost everyone there focused solely on Virginia, even though Elaine was the “only one signing autographs.” 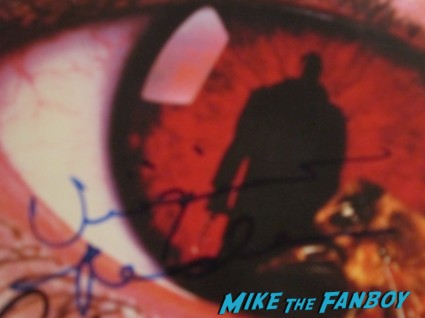 Book Soup provided free cheese & crackers and wine for the event to create a wonderful ambiance. Both Elaine and Virginia read some poetry before they went into the back with only Elaine sitting down to start signing autographs. Several of us politely approached Virginia, who was lingering around the signing area to sign some memorabilia and she gladly obliged us. Although she didn’t officially say it, Virginia limited almost everyone to two items a piece and fans practically blocked the “actual signing” to create two separate lines in the back. Virginia signed my two DVDs (including personalizing “Sideways”) before signing my poetry books as well. Overall, she was very genuine and a complete sweetheart, but it did certainly feel weird attending an autograph signing for someone who “wasn’t technically signing autographs.” Still, everyone was quite cordial and calm to create a wonderful memory.

As a result of obtaining four autographs for “free,” it was hard for me to justify paying for her autograph at the most recent Hollywood Show. Had I not met her before I would have gladly paid because “Sideways” and “Candyman” are two of my favorite films of all time. Plus as all the MTF Family can attest, sometimes it’s also best to keep a great memory and opinion than have one ruined at an autograph show. I’m looking at you, Miss Shannon Elizabeth! Until the next time, happy autograph hunting! 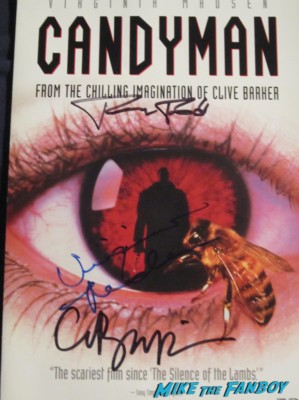