Billy headed out to the Drinking Buddies premiere and got some pretty cool success… I’m not sure that he was sober for the event but for a movie called Drinking Buddies what do you expect right?

Welcome back to Billy Beer’s Barstool. Did someone say Drinking
Buddies? Where do I apply? Olivia Wilde is going to be there! Am I
dreaming???? Today we are off to a full day of seeing the cast of the
movie Drinking Buddies. They’re doing a press thing, and then they
have their premiere.

My main goal of the day is to finally get my picture with Olivia. My
luck with her has not been very good. The first time I met her was at
the Spirit Awards. It went OK, I did get 1 auto, but was denied the
photo op. Next time I was SUPPOSED to see her, they decided to riot on
Hollywood Blvd, and that pretty much ruined any chance. Then she no-
showed at “The Words” Premiere. Finally, she skipped over me at the
Burt Wonderstone Premiere. 5th times a charm, right?

When I get to the Press event, I find out that Anna Kendrick is not
going to be there. CRAP! Guess I’m not going to be able to finish the
poster today. I also had a Pitch Perfect picture I still needed her
on. Oh well. So you know, Press events suck cause there’s a lot of
waiting around, and you have no idea when or if you’re going to see
anyone.

It looks like the event is finally ending. The first person we see is
Ron Livingston. I really didn’t need him on anything cause I got him
at the Conjuring Premiere. So we wave and let him drive by.

Next we see Jake Johnson. All the guys from The New Girl are so nice.
He pulls up and rolls down his window to sign my poster. I thank him,
and he was on his way.

After waiting for another 30 minutes for Olivia, a car attendant
finally comes over to us and asks us who we’re waiting for. Then he
tells us she already left. UGH! Will I EVER get a picture with this
lady???

Off to the Premiere. We’re cutting it kinda close, but when we get
there, there’s not even a fan pit. It’s going to be a free for all.
Great :/ (sarcasm) I’m usually not good at these, cause I’m not the
most aggressive grapher.

There are a few walkers, a couple of the regulars Melanie Lynskey and
Kate Flannery to name a few.  I did get a picture with Hannah Simone. 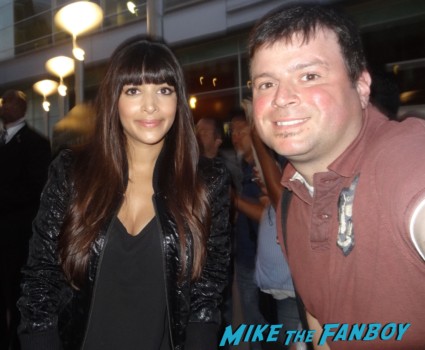 But right now I’m really only here for one person.

Ron is the first to arrive. A number of people go up to him. But it’s
not the normal crazy. People are kinda lining up and it’s a little
organized, and Ron is signing and taking pictures with everyone.
Amazing what happens when people aren’t there yelling and screaming,
and actually being a little respectful. 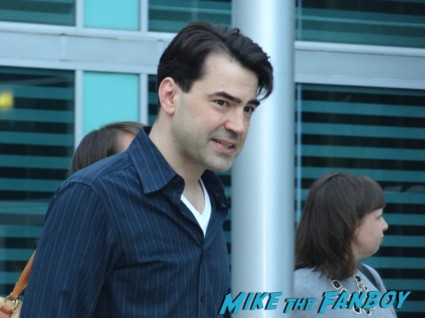 Jake is next to arrive, and it’s pretty much the same as Ron. I had
nothing left for either, so I just took a couple of pictures. 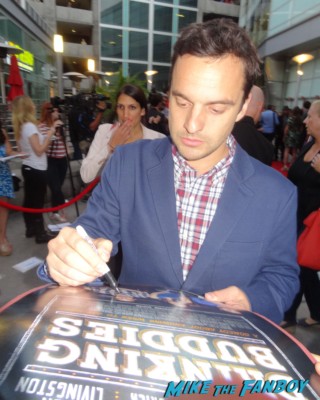 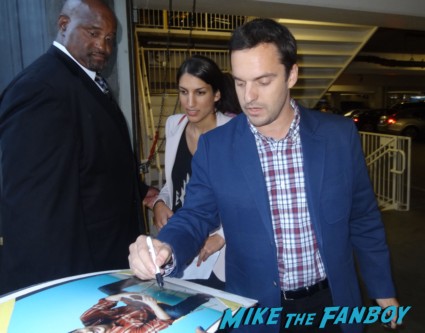 Finally Olivia arrives. Jason is with her. We actually line up, and
wait for her. Finally when she gets to us, she tells us “sorry, I’ll
do it after” UGH! The dreaded “after”. We stand at the end of the of
the press line hoping she meant after the press line. No luck, the
publicist basically told security to rush her in. Grrrrr! 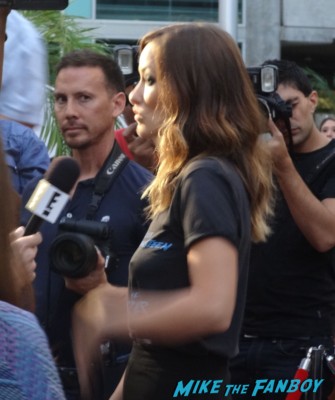 We wait for exits. After figuring out where they were going to pick
her up, we waited. Finally the door opens, and there’s Olivia and
Jason. They were going to rush her in, but she told security she told
us she would do it after. The publicist then got in there, and was
like “ONE EACH!” Man, there’s only 6 of us, and only 2 of us have
stuff for her to sign. Everyone else just wanted photo ops. Well, she
turns down my first picture. I guess it was too sexy. The funny thing
is, that’s all she used to sign. That’s why I still had it. Instead
she signs my Drinking Buddies poster. I ask for another one, but the
publicist said no. Then she started taking pictures. Again, only 6 of
us. I ask for a picture, but she then says she has to go. UGH! Funny,
cause after I got turned down, we ended up getting pictures with
Jason. Guess you really didn’t “have to go”. Still no Olivia photo! 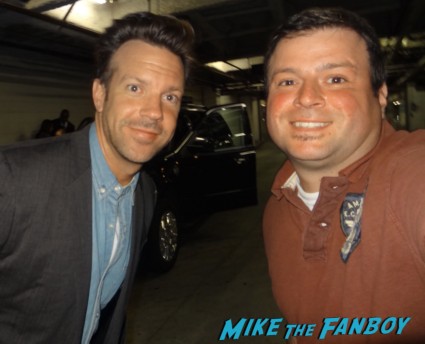 Well, my ride wanted to go, but I was determined! So I gave him $2 to
eat at Jack in the Box while I waited at the after party. We get there
a little late, and everyone was already in. I guess Olivia didn’t sign
on the way in. But said she’d do it on the way out.

We didn’t have to wait as long as I expected for an after party for a
movie named drinking buddies. Olivia and Jason finally come out. It
was the same thing. She told security that she said she would do it on
the way out, and agreed to do one each. I’m about 4th in line. The
first 3 people get their things done and then someone asks for a photo
op, she said she didn’t have time. Then she gets to me. If I’m going
to get this pic tonight, I’m going to have to sacrifice an auto. I
tell her “I don’t want an autograph, all I really want is a photo.”
She tells me “if you can take it fast”. I warn her there’s a double
flash (if you have seen my millions of photo fails, you’ll know why),
and take the picture. 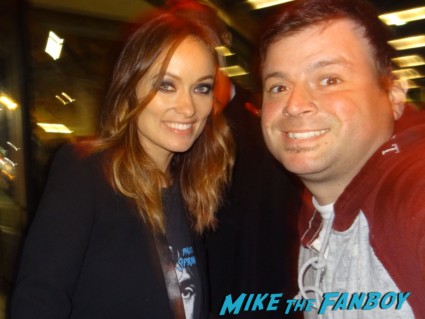 The night is over, but I finally got my pic. Off to the bar to
celebrate, I need to go find a drinking buddy! 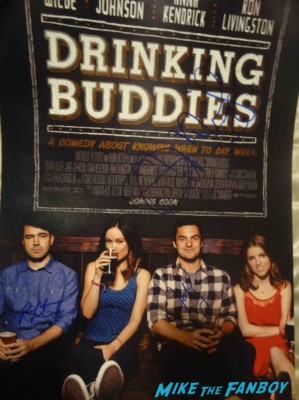