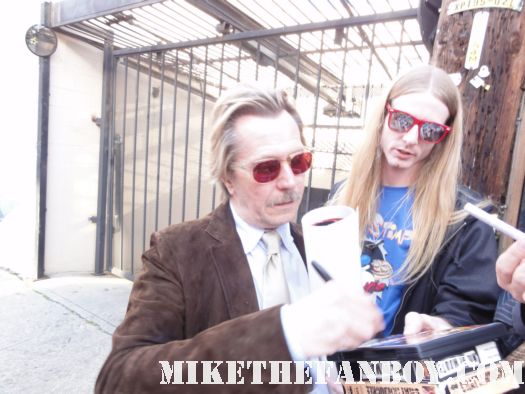 I think this one needs no introduction, so I will let the lovely Erica take it away!
Mike

Loyal readers of Mike the Fanboy, may recall Mike’s comment that I would be sad that I missed Gary Oldman greeting fans at the recent Red Riding Hood premiere. This is very true, but I’m in luck because Gary is making an appearance at a retrospective for Ben Gazarra!

I head to this theatre and spend quite a bit of time trying to figure out where he might arrive. There are some professionals and some collectors here and we’re spinning around in circles trying to figure this out. Front door? Back door?

A bunch of us wait up front and then see someone who looks like he’s working the event suddenly head to the back. We duck around to the back and, sure enough, there is Gary Oldman in the middle of the alley with a semi-circle of people around him!

The rest of us head towards him and now he’s surrounded…it hasn’t gone unnoticed as he’s on the phone chatting with someone and then sees all the faces looking at him expectantly. He says to his phone “Look, I have to go now, I’m surrounded by people with photographs in their hands” and begins to focus on us. Nice man!

Gary is by himself and the door to the theatre is closed. Since he’s sort of surrounded, it’s a bit chaotic so he stops and heads to the theatre to go inside. Only, the door is not obvious so he asks us for directions so we direct him to the door and knock for him. It sounds like a bad joke…

It’s strange, but they don’t immediately open the door. So Gary waits for them to respond while he’s surrounded by all of us. When it’s obvious that they door is not immediately opening, he starts to sign for us again.

I get him on my Harry Potter promotional Tom Riddle Diary. Yeah! Sirius Black!

The door is still closed so he’s continuing to sign and I just manage to get him on The Dark Knight as well. He’s affable and is commenting on things as he’s signing them. There are some publicity shots he definitely likes more than others.

And still the door doesn’t open…

There is a variety of pictures flashing in front of him from Batman to Sid and Nancy to Dracula and other things. Gary Oldman has been one busy man with a very varied resume and the professionals have stacks for him.

Gary then gestures to the large canvas poster in his hand and says “I’m one of you today since I’m getting an autograph, too!”

We can hear people finally approaching on the other side of the door so we know this golden moment with Gary is coming to an end. I’m trying to get one more signature for him since Mike gave me his UK Fifth Element poster to get signed (Fifth Element? Really?!?!). However,
someone is trying to get Gary to sign some Red Riding Hood pictures and it distracts him away from me.

Gary refuses to sign Red Riding Hood and makes a comment that implies he’s not expecting it to land on the Oscar best picture list next year.

At this point, the door finally opens and he heads in after signing up a storm. Must say that Gary is awesome! 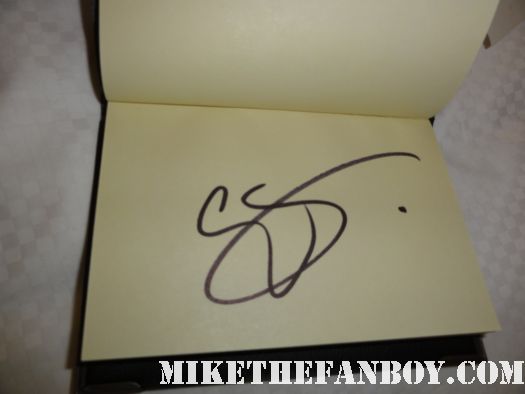