You know, I say… “I’m jealous” a lot and generally speaking I’m kidding or trying to make people feel good, etc… in this case… I’m actually jealous. See, I’ve been a fan of Lana and Andy Wachowski since I saw Bound oh so many years ago. I mean, I fell in love with the way it was directed, how Crystal Connors (AKA Gina Gershon) was the tough chick and Jennifer Tilly the vixen. It was amazing.

Then came the Matrix. Well… I don’t need to say anything else right? The Lovely Erica was out and about at the Chicago International Film Festival and was able to meet the brother and sister duo! I’m crossing my fingers they will be just as nice at upcoming Cloud Atlas events here!

Lana and Andy Wachowski, the ground-breaking writers and directors of the Matrix, are back with another hyper-ambitious film, Cloud Atlas. Cloud Atlas is a spotlight film for the Chicago International Film Festival and since the Wachowskis are from Chicago (Clearly! In the Matrix, Trinity and Neo kept running to phone booths at intersections not too far from me) they will be attending!

Notoriously private, the siblings have been out of the spotlight for some years so I’m very curious to see if they are fan-friendly or not. You never know as some Artists (with a captial A) are just not approachable.

There are about 10 of us fans here – one person has a printed poster, but the rest either have dog-earred Cloud Atlas books or vintage Matrix posters that we’ve been holding onto. There really isn’t a fan area so hopefully everyone will be cool.

Just before the screening is to start, the Wachowskis arrive with the third director of Cloud Atlas, Tom Twyker (Run Lola Run). The group starts to move towards the carpet, but we ask Lana and Andy to sign and they do! Yeah! 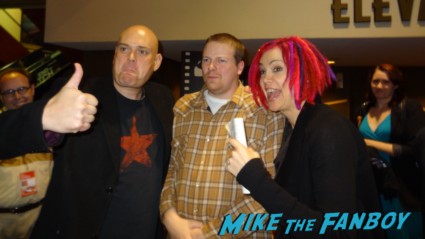 Lana is playful and starts to doodle on my poster. She also likes to draw hearts and balloons and such. Yep, fan-friendly!

I ask Lana if we should really be calling them “Starship Wachowski” as they mentioned in a The Hollywood Reporter interview. She says it was only a joke – which THR didn’t seem to get since it called them Starship in an article last week. I guess if you’re not out in public a lot, they can’t tell when you’re joking!

Andy Wachowski is quieter than his sister, but approachable even when he’s mock yelling at me since the click Sharpie got ink on his hand. (I tell him that he’s waterproof and it’ll wash off and he laughs.) Andy signs my poster and when he sees Lana’s doodling, Andy goes back and adds “XOXO.” Very Gossip Girl of him! 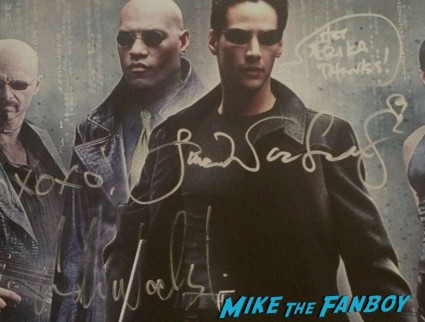 While we’re all scrambling with the siblings, Tom Twyker is also in the background watching all of this. I ask him to sign my book and we chat a bit. Nice guy and really patient as so much of the focus is on the Wachowskis. 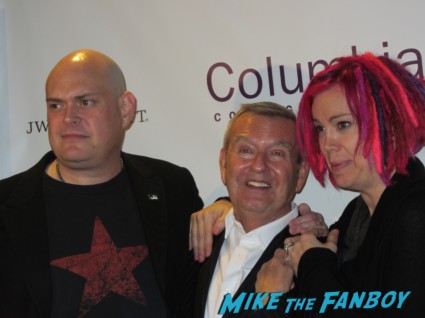 The Wachowskis are taking their time with us fans until the group is shepherded to the red carpet for a quick photo call. Lana continues to giggle and play around with the cameras until their handlers end the photos. 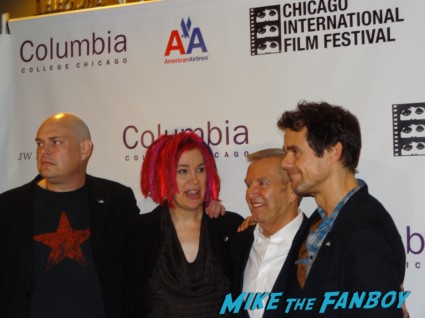 Instead of going to the screening, the group heads out to leave. However, they stop (once again) for the fans and sign some more stuff. Sooooo very nice of them! They may be media shy, but they are fan-friendly. Love that! 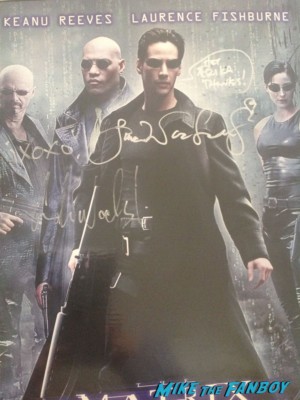 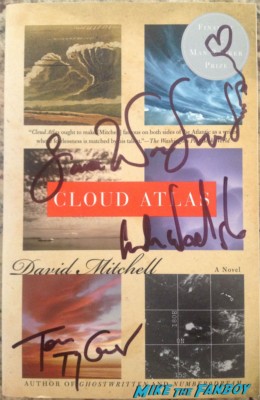