Remember how everyone looked alike in the 90s? Skeet Ulrich & Johnny Depp, Chris Tucker & Chris Rock, Nick Nolte & Gary Busey and of course the most obvious Laurence Fishburne & Samuel L. Jackson. All kidding aside after an event I can understand one million percent why people confuse the two of them.

A few weeks ago I received a heads up about Nicolas Cage’s latest film “Running with the Devil” was hosting a small premiere in L.A. and decided to check it out. After all being able to see Nic Cage is always a treat and considering how awesome he is generally to his fans I felt it would be worth the trip. However, what should have been a fairly calm night turned into a cluster thanks to a Mr. Laurence “Larry” Fishburne and the collecting scene.

I met up with Scotty the Music Man and some other collectors, who were eagerly awaiting both stars of the film, Nic Cage and Laurence Fishburne, along with some of the supporting cast. Now considering the location it seemed like a solid chance that IF EVERYONE REMAINED CALM and organized it wouldn’t be bad. However, four dealers/collectors decided to ignore instructions from security and got greedy. Despite security putting up a barricade and informing everyone to line up behind the rope, four nincompoops decided to mingle near where drop offs were and “couldn’t contain themselves” setting a bad precedent almost in the vain of “The Fanatic.”

The first indication was one collector “went crazy” and literally had some random celeb sign dozens of photos, who looked like a normal guy and was also working the event. Eventually others starting trickling in with random drop offs and walk ins when Laurence Fishburne started walking down the street. Instead of listening to security, who were 1000% on our side, these (fill in the blank) ran up to Laurence Fishburne shoving stuff near him. Like most people, if you ask politely instead of throwing items near someone, they will gladly oblige when our group heard a very loud “NO!!!!” We all looked at each other and said, did they just ruin the night?

Earlier in the evening security said if everyone was aggressive, they would tell all the guests to ignore all autograph requests and steer them clear from the fans. However, they realized it was four outcasts and not the majority of us ignoring their requests. When Fishburne got close to us, the orderly line behind the rope, someone’s polite plea caught Laurence Fishburne’s attention and said “I will do it after.” Fishburne again motioned he would sign after- the red carpet or the screening- no one knew, but did not acknowledge TWICE. Fast forward to after the screening.

Nic Cage signed-that was interesting in its own right- but everyone was waiting on Fishburne. Considering I was there and got Cage I said “why not” and decided to attempt getting my special edition “Apocalypse Now” Dossier Edition DVD signed. 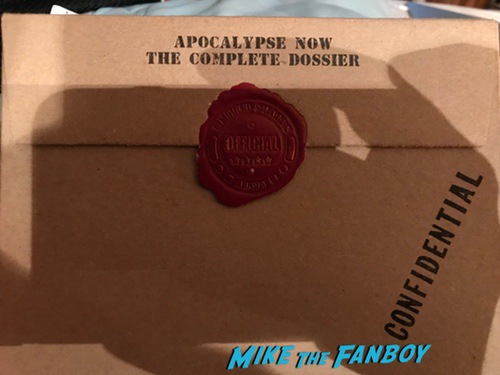 Besides Scotty and one other person, EVERYONE had MATRIX memorabilia and I mean EVERYONE ELSE had tons! Before the screening ended security tried to trick the four troublesome collectors from earlier, but to no avail and they soon congregated by the line almost screwing everyone again with meeting Nic Cage when he left. A few minutes later, Larry came out and I must say I have never heard so many “F” bombs and variations of “MOFO” in my life. Truly, you thought it was a YouTube video of Samuel L. Jackson saying the F word.

Legitimately I can understand when people say “they confuse the two” of Fishburne & Samuel L. Jackson as it was a really rapid fire of cursing with F bombs every few nanoseconds. Larry told everyone to “f’n calm down” and he would sign. However, the line broke loose because several people couldn’t understand or recognize the concept of an orderly line causing them to engulf Fishburne. Instead it was a barrage of posters and photos hitting everyone around, including Larry, with people such as myself sardined for no apparent reason and unable to escape. Now normally most people would say, “screw this” and not sign at all. Still, Larry signed up a storm and probably signed the same images and posters of “The Matrix” dozens of times for the same people over and over and over again. Double dipping galore would be a GROSS UNDERSTATEMENT.

Scotty got his “Boyz in the Hood” poster signed and Larry ignored my DVD completely that I calmly held out despite getting covered by dozens of photos. When I tried asking him in the chaos, Larry responded, “What the F is that? I’m not F’n signing that. I don’t even know what the F that is.” When I tried explaining it was a special edition DVD for “Apocalypse Now” he kept signing others people items and then said, “Mofo didn’t you hear me. I’m not f’n signing that. Don’t you f’n getting that. Get that f’n thing away from me. I’m not f’n signing that. PERIOD.” 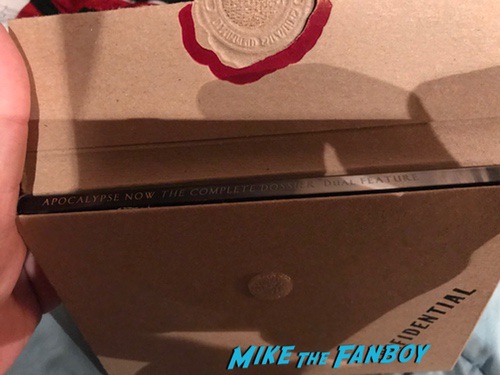 WOW! Even several collectors by me laughed at the notion how rude and obnoxious Larry acted once we were able to break free. The whole situation was chaotic all around as you see in the photos (I was trapped in that chaos before finally being able to break free). I was completely indifferent in “meeting” Larry and brought the DVD as a “just in case” item, but boy were others shocked. They asked to see the item and couldn’t believe he wouldn’t sign the DVD. One collector even commented you “were just standing there and that’s ridiculous.” In all honestly IF I was a serious fan of Laurence Fishburne I would certainly be devastated, but clearly, he will always be Morpheus and will always be a gigantic douche in my book.