Home / Fanboy News From Around The World / Fanboy News! Tommy Lee Says No More Fanmail! Steve Kerr’s Autograph Story! No Selfie, But Can Fan Asks For Netflix Password? And More!

It’s fanboy news! I hope everyone is being safe with the pandemic! This week, there’s Tommy Lee who is over eBay sellers. It’s always sad when someone is over signing.

Check out the rest of the news below

If you were planning on sending any fan mail to Tommy Lee in hopes of getting his autograph, that option is now off the table. The Motley Crue drummer says he is done signing things because he keeps seeing them being resold on eBay, and those who do resell autographs “can go fuck” themselves.”Just wanted to do a public post saying that I’m done doing fan mail,” he wrote in an Instagram post that features photos of his signature on various items. In an effort to combat his autograph being resold, he made sure to address the fan firsthand so that their name would be with his. 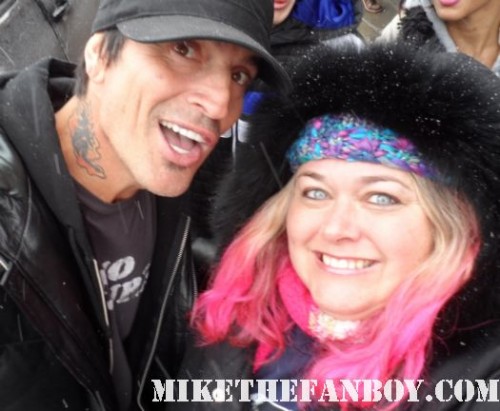 “I looked at him, I remember the moment really well. He walked up and he said, “Hey, Mr. Kerr, can I have your autograph?” I said, “Scram, kid. I got more important places to be.“I can’t be bothered with stuff like this, son. Go talk to those guys over there.”

"I looked at him, I remember the moment really well. He walked up and he said, "Hey, Mr. Kerr, can I have your autograph?" I said, "Scram, kid. I got more important places to be." pic.twitter.com/bG8gnOQ1Ai

The Evolution of the Autograph (And You Can Forget Selfies Too)

The camera phone transformed sports fans’ desired memento from collecting athlete signatures to snagging selfies with players. More recently, fans have sought a scripted recording, such as a greeting via Egraphs or Cameos. Now, a new company, Powr, aims to create a truly interactive experience by connecting fans with athletes to compete in esports.

New Saints quarterback Jameis Winston, who signed a one-year contract for $1.1 million last week, was interviewed by area reporters on a Zoom teleconference on Wednesday.Winston was the first pick of the 2015 draft by the Tampa Bay Buccaneers out of Florida State and was their starter for five seasons.

We’ve seen die-hard fans get some weird tattoos in the past. Some of them include fans getting body art that predicts a pending championship. I will never understand that one.We can now add this to the list of things that is confusing. A Cleveland Browns fan legitimately turned an Odell Beckham Jr. autograph into a tattoo. This is a real thing in 2020.

Brews News: NHL fans can commiserate with a beer and an autograph

Bayfield Brewing, its year-old taproom now serving as a shipping room, has been sending beer by courier as far afield as north of Thunder Bay and east to Ottawa in tall boy cans literally filled one at a time.

The Autograph Hunter, Part 5: The Circle of Life

On Halloween, Kait and Liv dressed like two kids, Sophie Grace and Rosie, that appeared on Ellen’s show. They mimicked every note, syllable, gesture and facial expression in the girls’ performance.They made a life size picture of Ellen’s face and torso and mounted it on a stick and called it EOS (Ellen on a stick). They put EOS on top of their Christmas tree. They posted a picture in Ellen sweatshirts, holding Ellen water bottles and crying because “they want to meet Ellen.”Their friends retweeted “#getlivandkaittoellen” hoping it would trend. One friend texted 15 reasons they should get tickets.

Not jersey, not autograph.. fan asks for Sunil Chhetri’s Netflix ID and password!

With sporting events across the globe either being cancelled or suspended due to the coronavirus pandemic, sportspersons have been locked indoors and are spending time not just with family but also by interacting with fans and India’s football team captain Sunil Chhetri received a message from a fan who wanted his Netflix ID and password.

Here's someone who has priorities straight and it's really making me want to consider the demand. 😂 pic.twitter.com/OdBGrS7g5v

Rather than finding them at the box level or higher like past Topps Stranger Things releases, these have three per pack. It’s an online exclusive with a fairly limited checklist. It’s 27 total cards although a handful of signers have two different cards. All already have autographs in at least one of the previous Season 1, Season 2 or Welcome to the Upside Down sets.