Next up for the awesomeness that is Wondercon was a panel right after the Son of Batman premiere, Felicia Day and Will Wheaton, the folks behind some quirky shows on Geek & Sundry.

The panel itself was a bit boring. A 90 minute panel, even if it’s to promote 2 shows, is a bit long. But since it was the end of the night and it wasn’t all that crowded I figured I’d have the opportunity to get some stuff signed. About half way through Will Wheaton says his goodbyes and leaves. Since the panel is still going on there’s no chance of getting anything signed.

Oh well there’s still Felicia and she just told a fan that asked for an autograph that she’ll be hanging around up front after the cast of Spooked came out. Spooked seems like it might be funny and the cast is made up of a bunch of past scifi show cast members. The clip they showed was pretty good.

Once the panel was over Felicia Day does a speed walk out of the room like walking fast is her job. There were a few of us that stuck around but she never came back and never did sign that young girls picture. All the good will they built with their key demographic was shot in that instance. That girl was crushed. Now a member of the Spooked cast, Ashley Johnson best known for being Chrissy Seaver on Growing Pains or the waitress in the Avengers did stick around and she signed an 8×10 for me that I had printed out from the Avengers movie. She was really sweet and stuck around to talk with the few people that didn’t leave. That was really nice and appreciated. 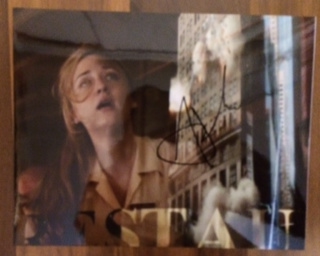 Last weekend was free comic book day and since i didn’t go to the comic shop that day I had an employee throw some of the good books into my folder. When i arrived this week I had 3 free comics sitting in my folder, all original stories. Pretty cool right? Along with those books I had 9 new books totaling roughly $30. Not to bad, I’ve come to grips with this addiction. Between my new favorite book, The Wake, and old, X-Factor, it was hard to make my picks of the week. So after much contemplation I chose Original Sin #1 and Future’s End #1. 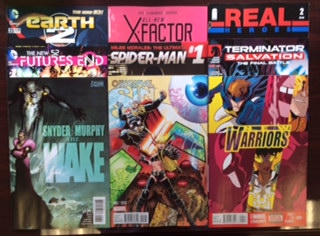 Original Sin is Marvel’s big crossover event for the summer and kicks off in a big way. Without giving to much away there are major changes in the works but following all the storylines set in motion could get extremely expensive. So, for someone like myself I’ll be just following the storylines that seem the most interesting and leave it at that. I would recommend picking up the Original Sin series. This is where they’ll be wrapping up all the various storylines. 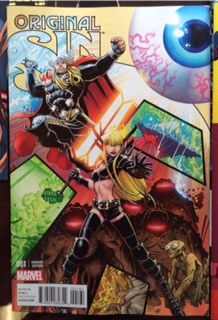 Next is DC’s attempt to bring Batman Beyond into the present. This first story is a blood bath and you see many, many of our heroes die. There was an issue zero that came out on free comic book day that is a nice way to test and see if you’ll like the series. There’s a lot of potential here for DC to collapse these various future heroes into the current DC timeline and grow there popularity as they interact with their original counterparts. This was a very cool story and possibly a series I would pick up all the tie-ins for. But first let’s see how the next issue reads. 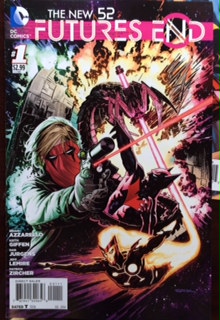 That’s it for this week, so if you’re on the fence about comics and want to test the waters stop by your local store and see if they still have any of the following free books from last weekend. Future’s End 0, Guardians of the Galaxy 0, and Rocket Raccoon 0.