It’s the 2015 Paleyfest and while this year I’ve decided to only attend a couple different nights, one panel I really wanted to attend was Girls.

I’ve loved Girls since it premiered with the buzz of a thousand lions. While the series hasn’t wowed in the ratings as of late, in fact the fourth season premiere was it’s lowest to date, but the quality of the series has remained consistent.

The panel was supposed to consist of three of the four girls of Girls but it was only two tonight. Joining Lena Dunham was Allison Williams, Alex Karpovsky and Andrew Rannells as well as producer and moderator Judd Apatow and executive producers Jenni Konner, Bruce Eric Kaplan and Ilene S. Landress. 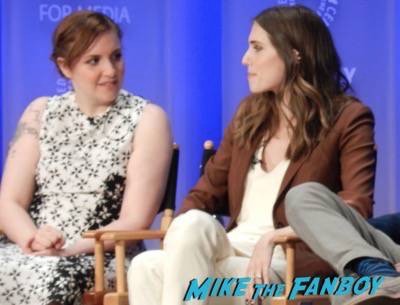 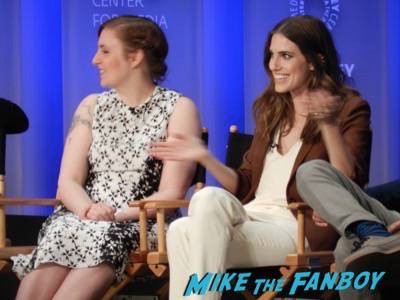 The panel was lively and Allison Williams was quite simply adorable. Lena Dunham was exactly what you would expect.

Lena talked of politics and how she used to always say that she wasn’t a political person but her viewpoint has changed adding, “I do care deeply about politics and things that are happening the United States right now, particularly in regards to women and reproductive rights.” Dunham said that changing ones mind is a good and healthy thing. 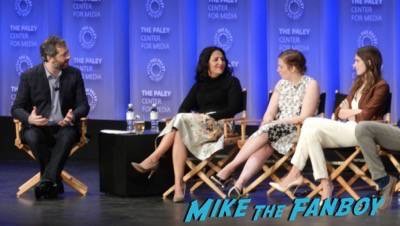 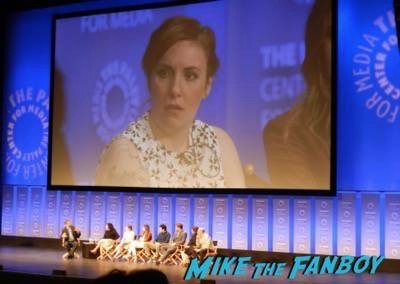 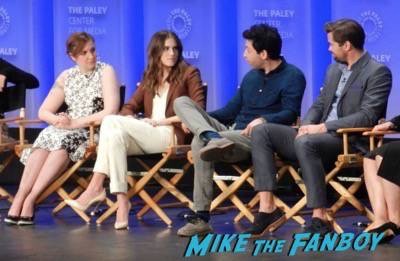 There were jokes about the end of the series and how Apatow wants it to end. The panel was vehemently against his version of the series finale.

Lena Dunham addressed the polarized audience of the series and how she doesn’t go on Twitter anymore instead having someone tweet things for her. Allison Williams joked that it was her. 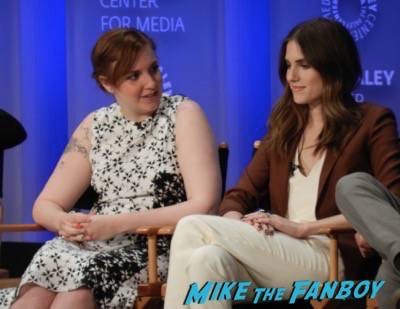 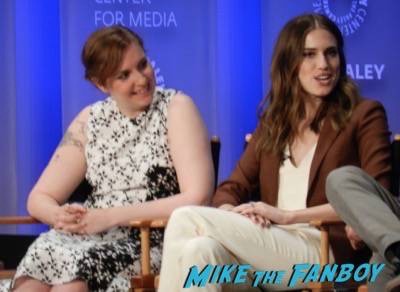 Talk turned to the backstage antics of the series and both actresses talked about how relaxed it is. Dunham compared it to her recent guest starring appearance on Scandal and said that while the set was amazing, she wasn’t going to craft services in her undies. 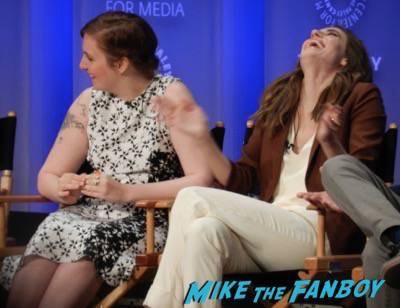 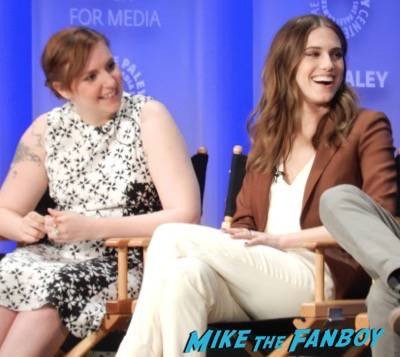 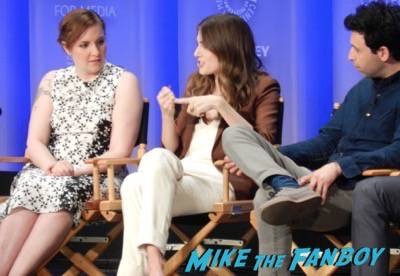 Dunham also talked about one of the first parts she booked that didn’t run out so well. Kate Winslet was starring and Dunham had to tell her that her baby was going to die. She talked about her line delivery and how her mother said to “just be yourself.” Dunham commented that saying the line, “Ummm so yeah your baby is going die.” very matter of faculty

Needless to say that Dunham didn’t make the final cut.

After the final question was announced there was plenty of drama. You can read all about that here.

After that horror show, I was able to make it down front and right to where Lena Dunham was signing. She was being very accommodating and signed both my Interview magazine and a mini poster for Girls season 1. Billy had my other mini poster and got both Lena and Allison Williams to sign it. 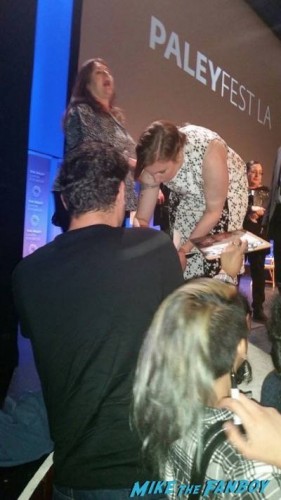 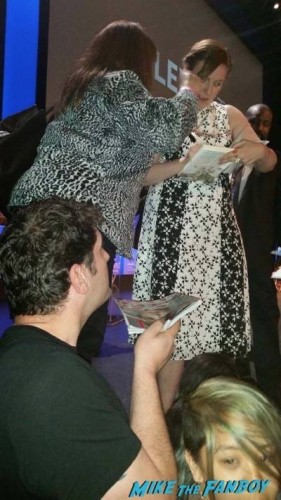 Then as I was trying to get a photo with Lena, she signed my Vogue magazine as well.

Then she bolted off the stage. I didn’t see Allison Williams, so I was thankful that Billy helped me out. 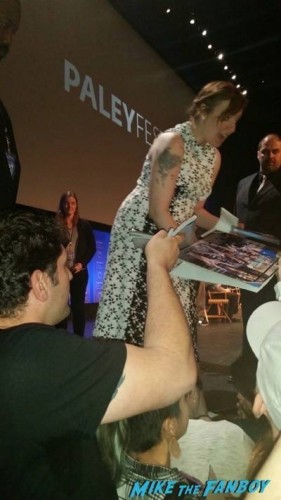 Both Alex Karpovsky and Andrew Rannells bolted as soon as the panel was over.

Even though there was tons of drama with the security and Asinine new rules I was still able to meet Lena Dunham which is why I came. So, all in out thankfully it worked out. 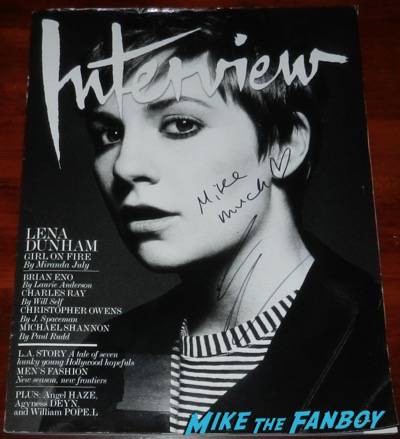 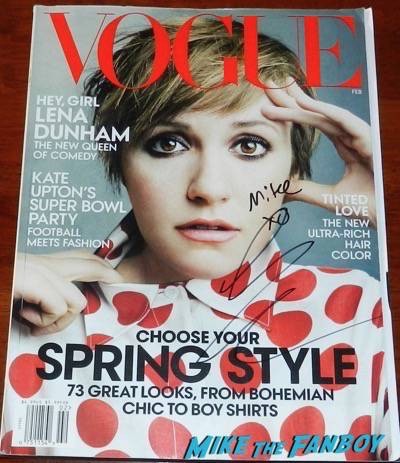 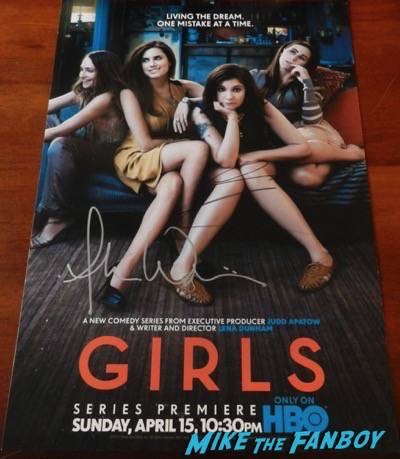 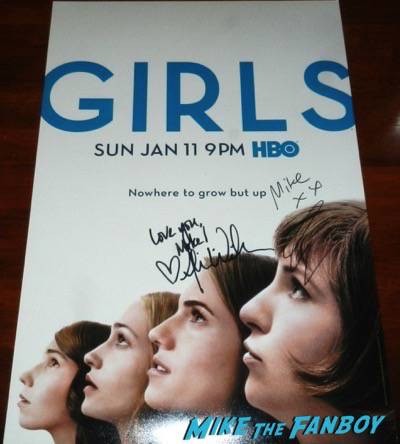