This week I was able to celebrate and help cheer on one of my favorite filmmakers receive a star on the Hollywood Walk of Fame, Mr. Guillermo Del Toro. Not only is he one of the most gracious and gregarious individuals around, but genuinely one of the most friendliest filmmakers ever. Guillermo Del Toro definitely deserved this recognition and so much more with all of his contributions to the arts. I convinced Scotty The Music Man to join me and we agreed to meet up, especially since Lana Del Rey would be joining the festivities. However I can discuss that aspect another time.

Now the last time I was at a star ceremony was maybe six years ago and heard how much they’ve changed. Despite showing up four hours early (you used to be able to arrive two and still be fine), there was already a line of 50 people, which swelled to 75 once the crowd’s friends and family joined them in line before being allowed in the “fan pit/barricade area,” before me and that’s not including the long line behind me. Most of the people were either wearing Lana Del Rey paraphernalia or holding LDR items, which was disappointing, but not surprising. Don’t get me wrong I love Lana, but she’s not the one getting a star and the attention should be all on Guillermo Del Toro. 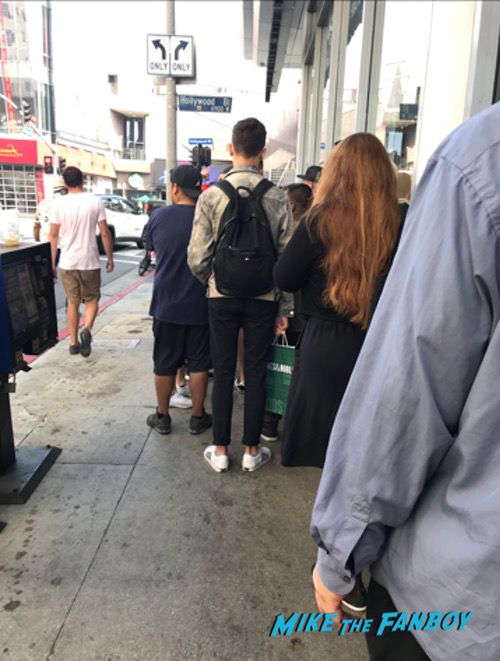 Scotty and I joked for the next couple of hours catching up with friends and acquaintances. Despite the 90+ degree whether we somehow managed not to die too much under the heat thanks in the large part to Scotty’s umbrella and wearing hats.  Besides J.J. Abrams and Lana Del Rey, it was anyone’s guess who else from GDT’s universe would be joining the fun. First celebrities to show up were Elliott Gould, Clifton Collins Jr. and Ron Perlman. Shortly thereafter Ted Danson, Mary Steenburgen and J.J. Abrams arrived with the cast/director of “Scary Stories to Tell In The Dark” along with “IT” director Andy Muschietti. 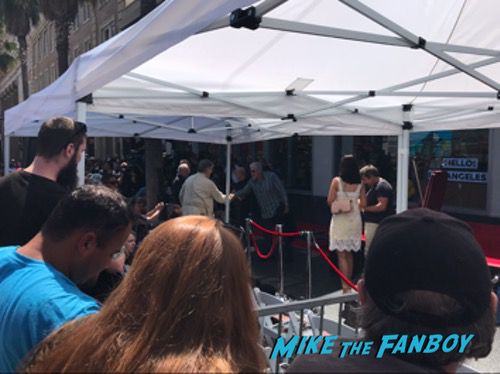 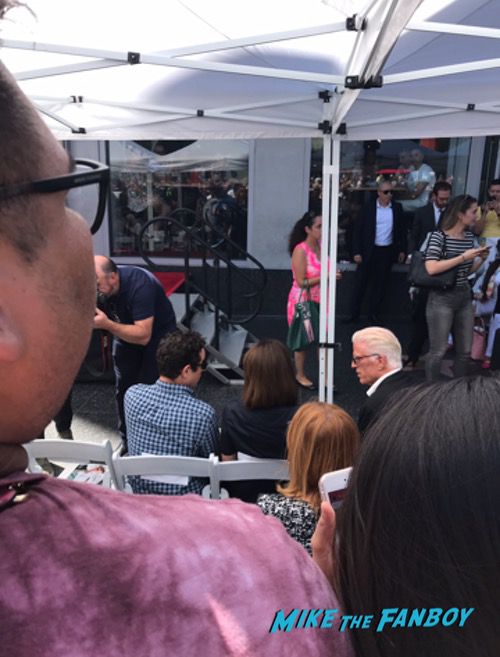 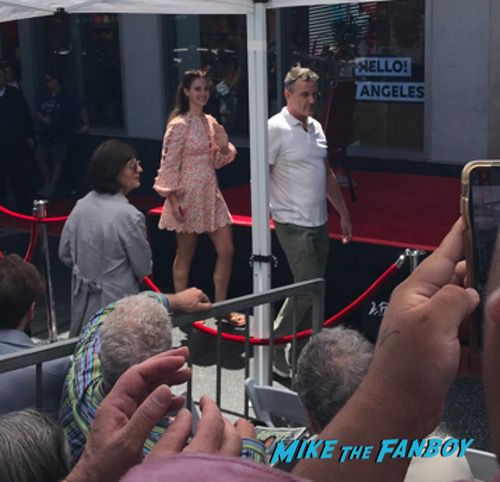 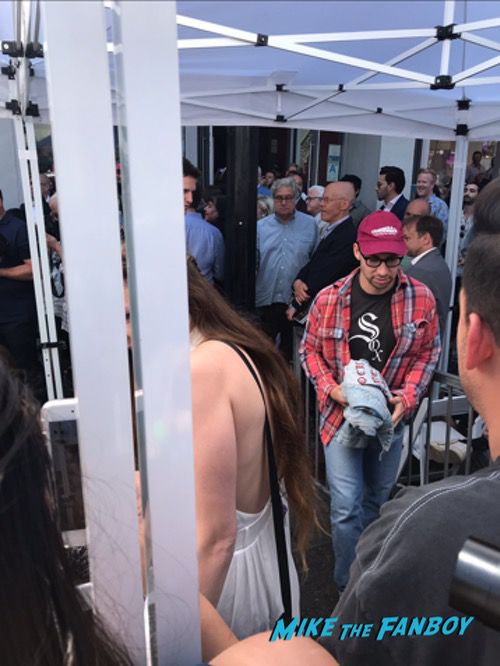 We called out for Ron and I initially missed him as the person in front of me only wanted to meet Lana, driving almost 100 miles away, but got Ron once he switched sides. Sadly Ron’s silver signature smeared, which I didn’t realize until later. 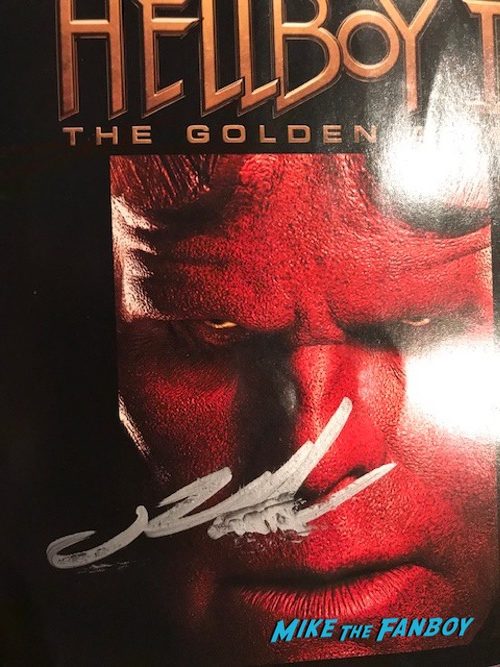 We attempted to get JJ’s attention, but he was busy interacting with guests. Before the ceremony, the cast & director of “Scary Stories” along with “It” director Andy Muschietti did sign autographs for people near them. Eventually most of the guests were sitting down and we were waiting for the two key people- Lana and Guillermo Del Toro- to arrive.

Lana came out to a roar of applause and praise, accompanied by two people including producer Jack Antonoff (fun, Bleachers and Grammy Award-winning producer). The way the crowd reacted you almost thought she was getting the star. Then the man of the hour, Guillermo Del Toro came out and boy did he have fun. Believe it or not he actually motioned for a pen to start signing autographs and someone tossed him something to get signed. It was unbelievable! 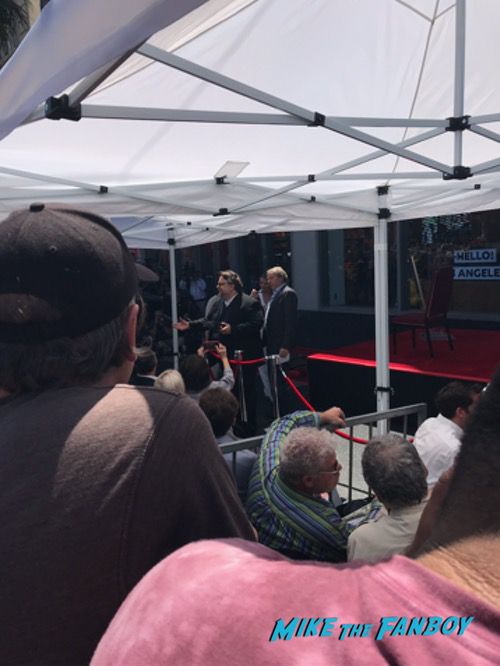 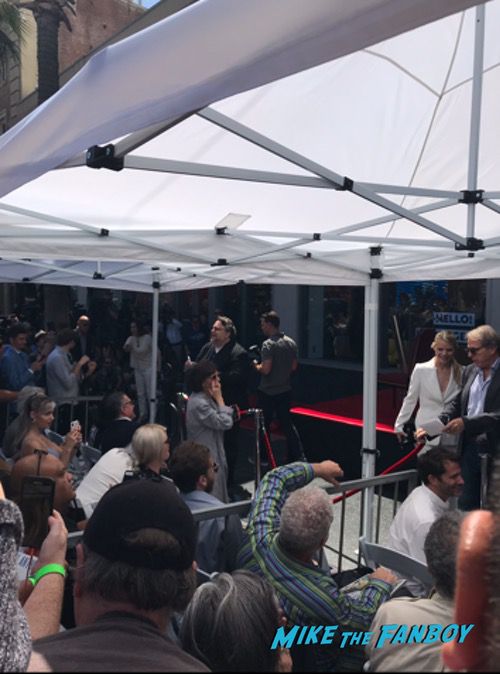 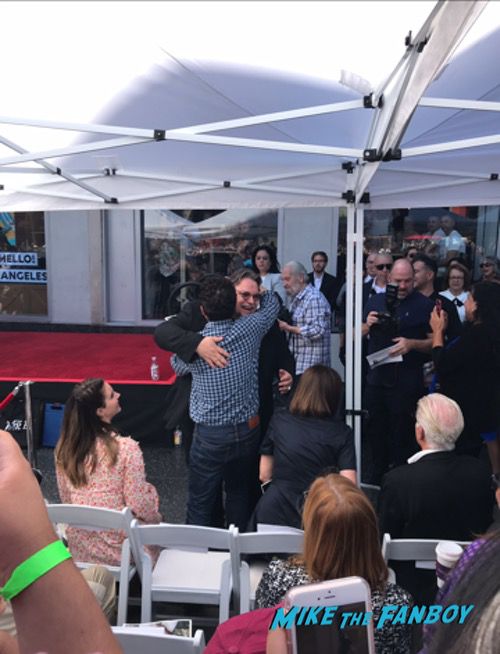 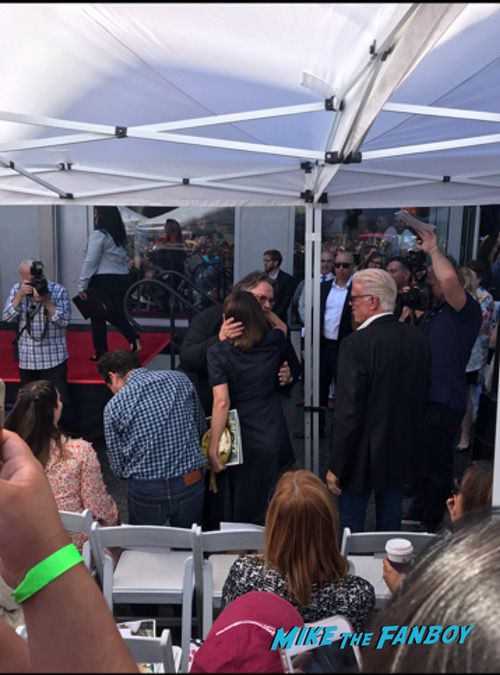 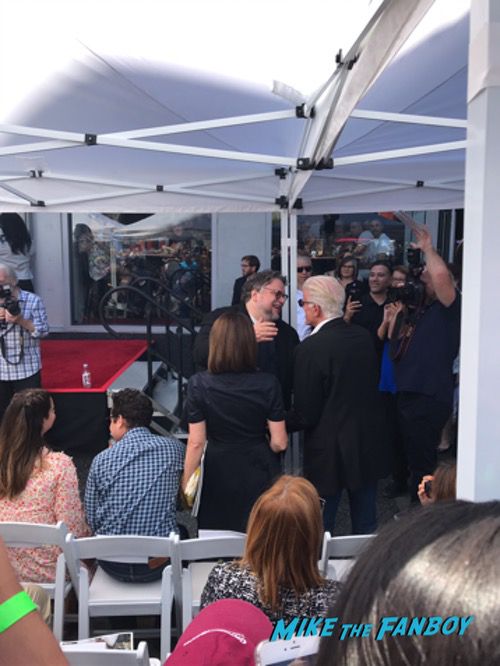 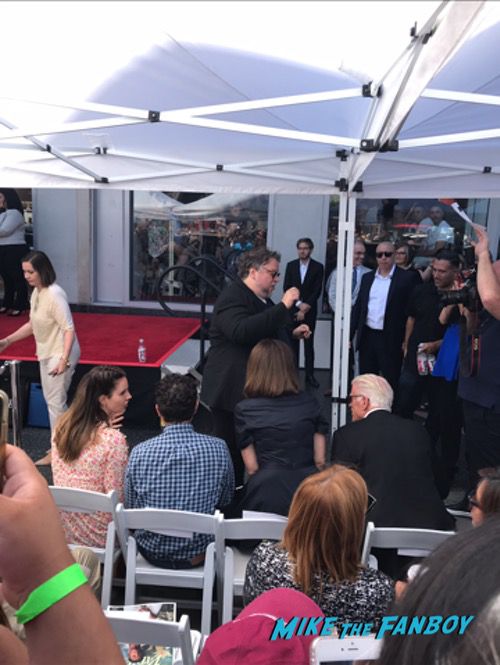 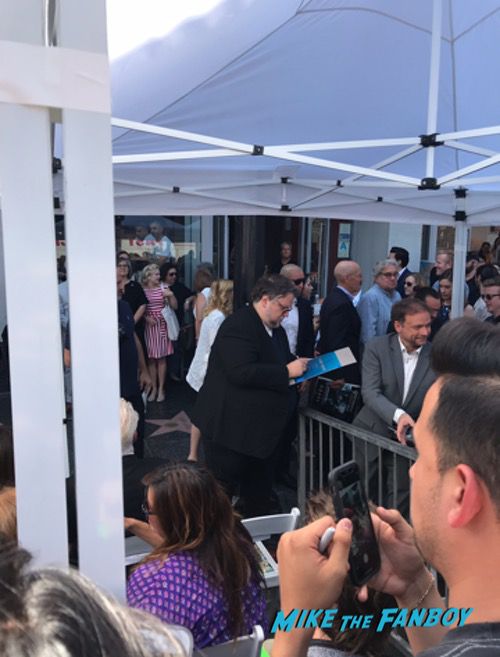 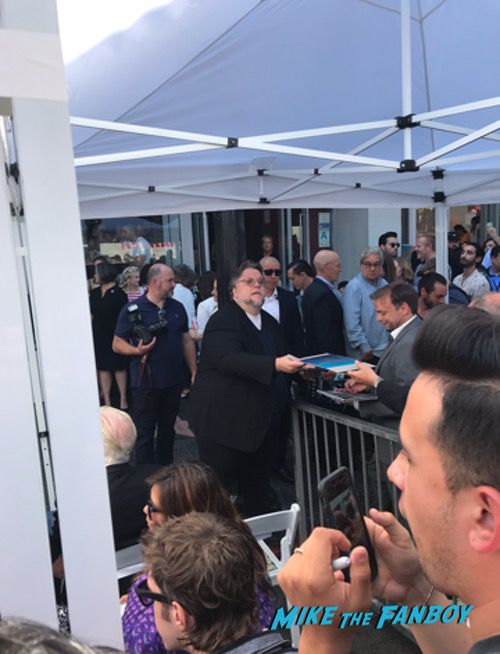 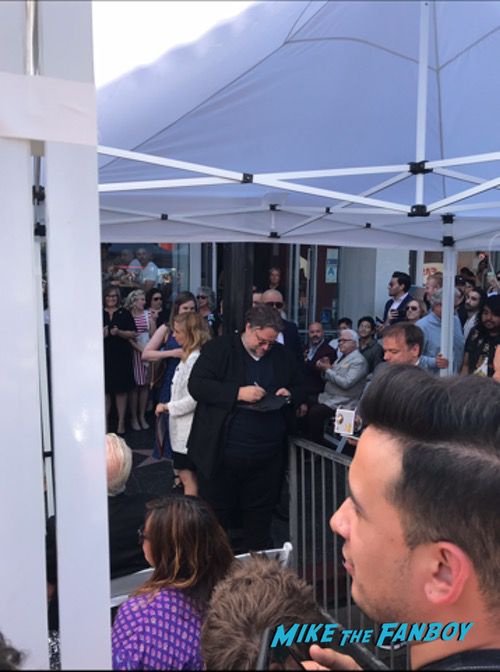 Eventually he got motioned to move and hung near the canopy with the guests when the unthinkable happened. Guillermo Del Toro started signing again! He literally positioned himself and told fans to pass him items down next to the director of “Scary Stories To Tell in The Dark.” It was exceptionally and exceedingly badass Guillermo Del Toro was doing “his thing” without a care in the world. He did it for a few minutes before being told to “stop” by the Walk of Fame event coordinators and to do it afterwards as his ceremony “had actually begun.” Since he couldn’t sign anything else, Guillermo looked around waving and interacting with guests and fans alike even motioning to the people in Hooters hello with their signs/pictures.

Talk about what an unbelievably nice guy Guillermo Del Toro is he actually posed with a few people and made gestures to fans “trapped behind glass.” At one point he even joked about pretending to grab a pen and sign through the window and posed for selfies despite the window separating him and the fans. How many people would even think, let alone do that? Guillermo was just above and beyond GENUINELY super friendly! Eventually he even had his fanboy moment realizing his special guests were there and graciously greeted them saying hello. However, one of the most beautiful, tender moments was when Ron Perlman got up and the two of them hugged before the ceremony. It was an absolutely adorable moment. 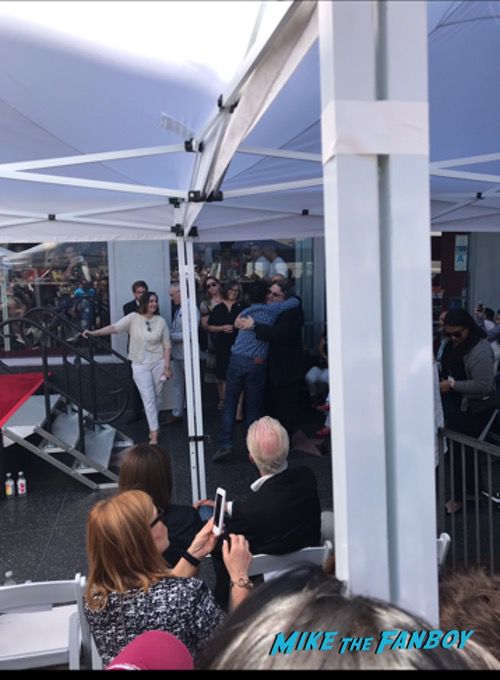 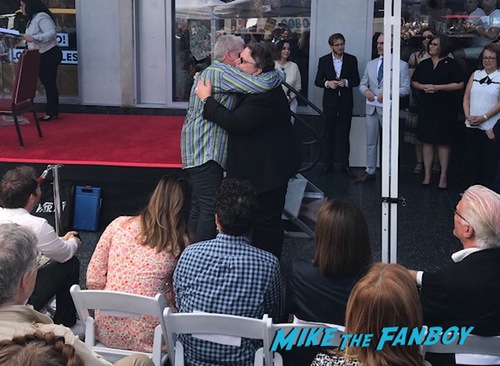 Throughout the ceremony, Guillermo completely had fun with interacting all around and when guests got near the glass he made a point to interact with fans. Heck he even made J.J. pose with him towards the Hooters fans so they could get a picture of the moment. Guillermo definitely made it a very interactive experience. Both Lana and especially J.J. gave compelling speeches in demonstrating their love and admiration for one of the most fantastic filmmakers around. Guillermo gave a beautiful speech to conclude the event.

Pretty much all of the celebrity guests left fairly quickly, but I did manage to talk to Jack Antonoff who was literally in front of us. I thanked him for his work with Bleachers and praised his producing work, especially how excited I was with the upcoming Lana Del Rey album “Norman F*****g Rockwell”. Eventually J.J. came back to his seating area and motioned he would come over after he finished his conversation. True to his word, he came over and signed up a storm. While everyone had Star Wars memorabilia I had a ridiculous movie that I grew up and absolutely loved called “Taking Care of Business,” which starred Jim Belushi and Charles Grodin. For film buffs, this was the first script J. J. ever sold and he was actually credited as Jeffrey Abrams. When he turned and saw it, not only did J.J. give a great chuckle but loved that someone “went classic old school” and “is a real fan.” You could sense it made his day and as a result he gave me a nice crisp autograph. I did get a “Force Awakens” autograph as well, but it was his general “JJ.” 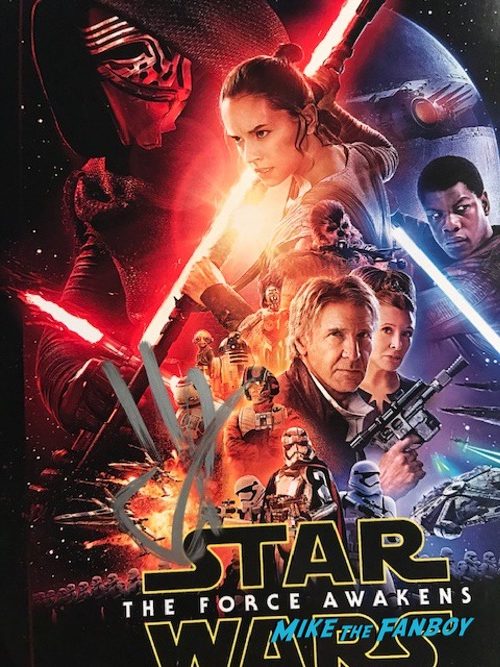 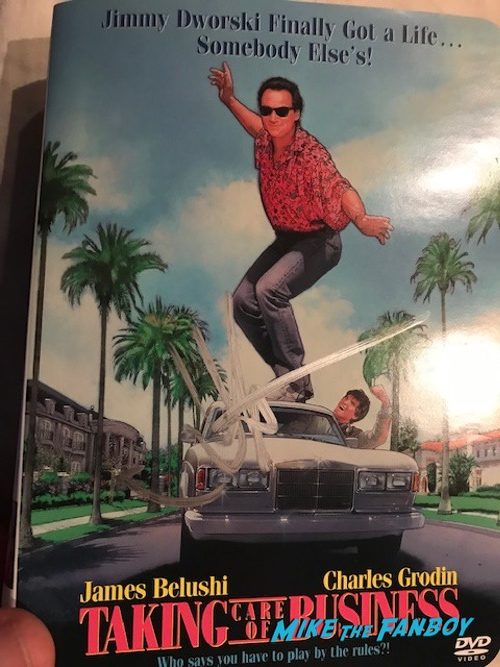 Once people saw the cast of “Scary Stories” and the directors mingling about, anyone who asked got an autograph. Everyone was essentially very fan friendly. As you can imagine people continued calling out for Lana-almost on the brink of obnoxiousness, which turned into a cluster situation. Honestly, she signed a handful of items and was EXTREMELY PICKY WITH WHAT SHE SIGNED. Let’s say if 7-10 items were presented, she might sign one. Honestly, she probably did more selfies/pictures all together versus maybe 10-15 autographs. 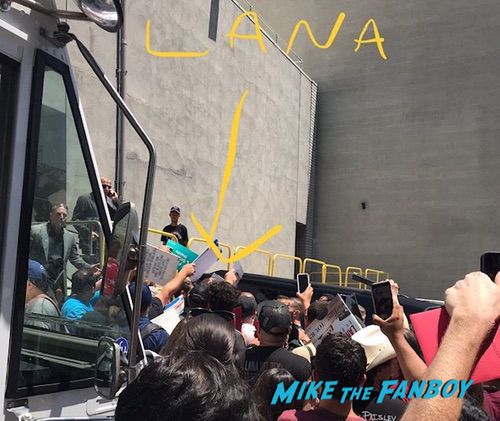 The heartbreaking thing was she signed literally to the right of Scotty and I after taking a double selfie for a fan. Even more frustrating was watching a barrage of people (albeit guests at the ceremony) get all of their photo/selfie requests granted, which eventually turned into an unofficial assembly line meet & greet merely a few feet away from the barricade and again near GDT’s star. As soon as Lana left, so did over half the crowd. 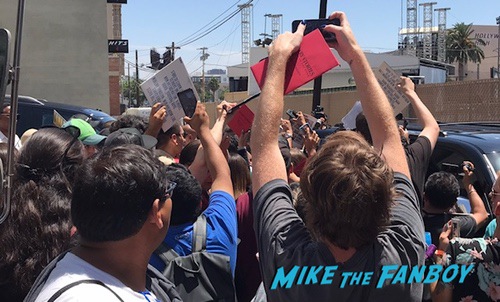 Then the man of the hour Guillermo Del Toro made his way to the fans after posing for pictures, but he pretty much barricaded himself in one section with multiple people double dipping and getting everything and anything signed. After about what felt like 10 minutes (might’ve been 5-10mins) in the same spot, Guillermo was instructed to leave. I debated about seeing if anyone would sign during exits, but decided I might as well and see what craziness was actually occurring. Sure enough the nutty nightmare continued with a sea of fans engulfing the cars, so much so there was barely room to breathe let alone move. I stayed as far away as I could. Once again more than half the people left. Guillermo came out and was signing up a storm once again!

Guillermo genuinely was having a blast talking and meeting with fans. Security sensed it was better to get him out then have him stay there forever. Also it didn’t help matters the crowd was blocking multiple vehicles. He kind of “attempted to get to his car,” but Guillermo was having so much fun interacting with everyone. Unfortunately no one was leaving so trying to move closer and forward became a whole ordeal. Eventually security got frustrated and tried to make people leave and really forced him to get into his car. Everyone around me somehow managed to push through to get him despite being half my size and got Guillermo’s attention with him grabbing items from them. Security finally got frustrated and started to push people’s arms away saying he “isn’t signing more” and “he needs to go, he needs to go, he needs to go.”

I somehow managed to stretch out my arm “just enough” and Guillermo grabbed my book by reaching over the car door. Security literally kicked everyone out, including me, and I said he has my book, which was quite literally the last item he signed before taking off. I thanked him profusely and they went on their way.

The entire time GUILLERMO DEL TORO was extremely over-the-top nice! Over the years I’ve witnessed him saying a plethora- YES, PLETHORA- of times telling security variations to politely “back off,” “I’m staying until I meet everyone,” “Stop lying to my fans,” “make a path for me so I can move and interact with fans,” and “I’m going to keep signing so calm down” and always EVERY TIME with a big smile on his face. The man, the myth and the legend Guillermo Del Toro is a legendary signer and one of the most fan-friendly filmmakers ever. If there ever is an autograph hall of fame, he should not only be inducted for the quality of his signature, but also his friendliness and consistency over the years. Thank you for being a brilliant filmmaker, unbelievably amazing to your fans and once again congratulations on your name being added to the Walk of Fame! 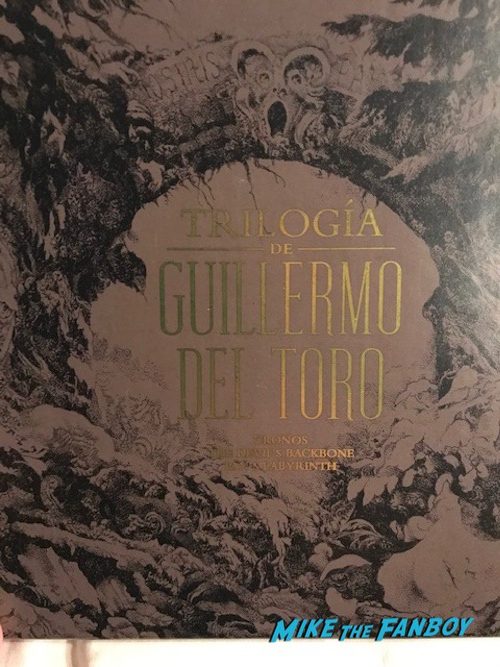 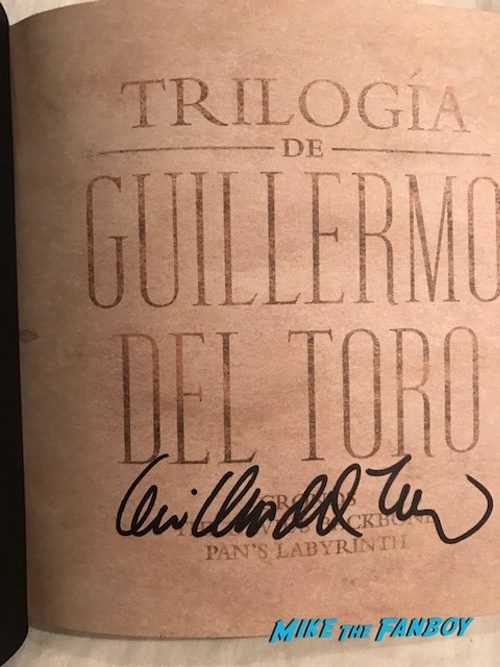