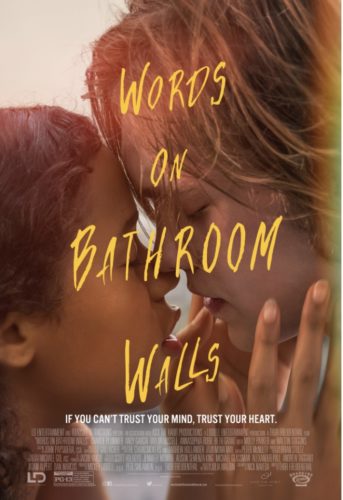 Coming-of-age stories seem so run of the mill nowadays it’s hard to distinguish one from the other. However, “Words on Bathroom Walls” is a compassionate, courageous story that delicately addresses disorders and is extremely relatable film for teenagers.

High school is rough for all teenagers regardless of social standings as hormones heighten your emotions and take you on a wild ride. Adam (Charlie Plummer) is your typical teenager and wants nothing more than to be a chef, but after being expelled halfway through his senior year he learns why he’s been seeing strange things. Adam suffers from schizophrenia and must hide his mental illness at his new school. Constantly living in fear about being exposed and seeing imaginary individuals (AnnaSophia Robb, Lobo Sebastian and Devon Bostick), Adam attempts living a somewhat normal life. One day, Adam meets the misfit Maya (Taylor Russell), an ostensibly outspoken and incredibly intelligent girl, who inspires him and for the first time sees something he has been missing- hope. The movie also stars Andy Garcia, Beth Grant, Molly Parker and Walton Goggins. 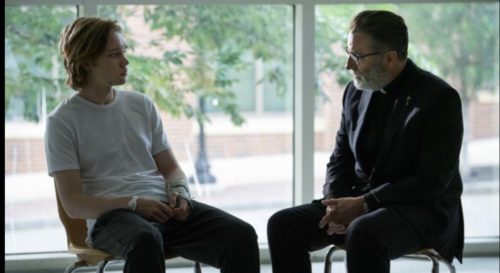 Based on Julia Walton’s novel of the same name, “Words on Bathroom Walls” is an extraordinary examination of high school life with a twist. Instead of a movie mocking schizophrenia, you have a delicate dissection of the disease and see it from an intriguing point of view with a charming coming-of-age story. Sure it’s a boy meets girl film, but the unconventional, unique story setting certainly sets it apart. Considering one of Netflix’s newest and charming shows is “Love on the Spectrum,” a dating show about individuals on the autism spectrum, pop culture is addressing and accepting everyone regardless of different behavior/diseases, especially mental illness. It’s a great change of pace. 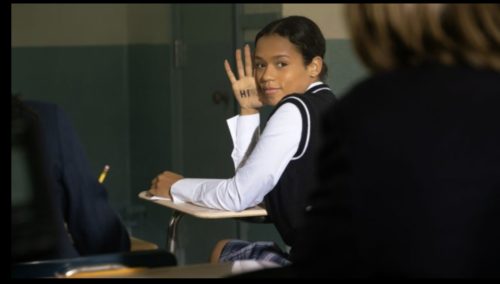 Charlie Plummer perfectly projects paranoid schizophrenia and eerily his performance reminds me of Logan Lerman in “The Perks of Being a Wallflower” as does the tone & feel of the movie overall. Plummer hones and maintains a relatable presence throughout the film without coming across cheesy or overbearing like, “poor me.” Plus the hilarious interactions with his imaginary friends such as the hippy romantic Rebecca (AnnaSophia Robb), the baseball bat wielding defender (Lobo Sebastian) and his bro best friend  wingman Joaquin (Devon Bostick) encouraging him from the sidelines highlight some of the funniest moments. Adam relies on the three for advice, especially when he is stressed, but they’re not the only ones guiding him. Empathetic priest Father Patrick (Andy Garcia) has a soft spot for him, but befriending Maya (Taylor Russell) proves essential and demonstrates how one person can change someone’s life for the better. Once again, Taylor Russell’s remarkable character captivates you from the get go. If you haven’t seen her in “Waves,” go out and see it as Taylor Russell is a star on the rise. Plummer and Russell’s chemistry certainly make this a more enjoyable coming-of-age story then what I expected. 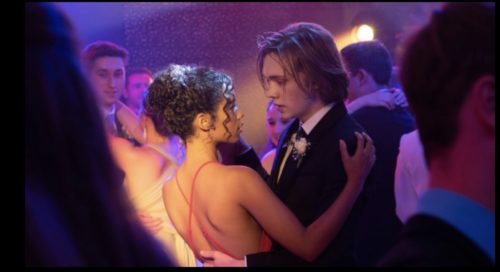 For fans of “The Perks of Being a Wallflower” and “The Fault in Our Stars,” you will thoroughly enjoy “Words on Bathroom Walls.” Despite being known for children’s entertainment, Thor Freudenthal (“Diary of a Wimpy Kid” and “Percy Jackson: Sea of Monsters”) fantastically manages the material well and writer Nick Naveda navigates the negative imagery of symptoms and struggles without playing the disease for laughs & heartache too much. Struggling with any disorder, especially mental issues, can challenge most from forming quality relationships and connections, but “Words on Bathroom Walls” provides that valuable message it’s okay to be different. A disorder doesn’t define you and everyone has issues so don’t discourage yourself. Overall, “Words on Bathroom Walls” might be a strange love story premise, but balances itself with wonderful wit and stylized self-awareness. Sure there might be some loose ends that are too conveniently wrapped up or glossed over, but the tender thoughtful story and message overpowers whatever imperfections exist.