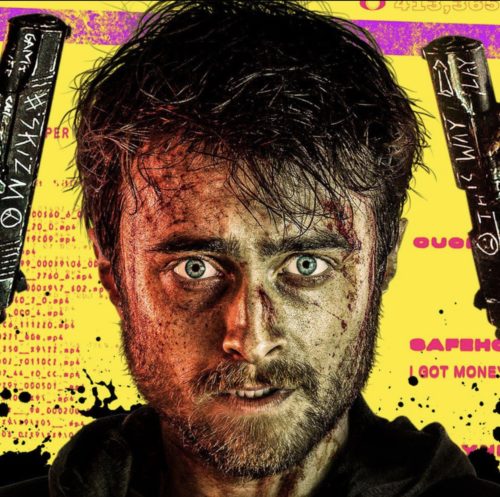 “Guns Akimbo” is the bloody, batshit crazy movie you didn’t know you wanted. Daniel Radcliffe runs the show in an entertaining rollercoaster ride filled with videogame violence destined to be a cult classic.

Computer programmer Miles Harris (Daniel Radcliffe) allows everyone to push him around at work, but at night Miles gets his revenge as an internet troll. Each night Miles goes home and trolls people online and his obnoxiousness intensifies with each subsequent comment. SKIZM, an underground fight club live-streamed with real life death matches between criminals, has become massively popular and Miles doesn’t understand why. One night, Miles decides to insult viewers on the SKIZM forum unknowingly insulting crime kingpin/SKIZM owner Riktor (Ned Dennehy). Insulted and infuriated, Riktor’s psychopathic posse breaks into Miles’ apartment and teaches him a lesson by drugging him. If Miles thought waking up with guns surgically attached to his hands was bad, he now has to face SKIZM’s deadliest killer Nix (Samara Weaving). Miles might be a loudmouth, but can his actions speak louder than words?

“Guns Akimbo” feels like an episode of “Black Mirror” about online bullying and results in an amazing action comedy. The balls to the wall action and social commentary certainly satisfies those wanting a 90 minute adrenaline rush. Imagine “Shoot ‘Em Up” meets “Hardcore Henry” with the humor of “Swiss Army Man.” Guns are constantly a blazing and the nonstop fun fuels this ridiculous, yet remarkable movie thanks to its lead. Daniel Radcliffe needs to be in every movie.

Anytime someone refers to Daniel Radcliffe as “the boy who lived” or interchange his wizard’s character name to describe a role he plays it persistently perplexes me considering his remarkable range. Some stupid, incredulous individuals insist he is “Harry Potter” and nothing else despite dominating dramas, comedies, horror and fantasy films embodying each character he portrays. Radcliffe’s remarkable character commitment captivates even the biggest critics and it’s hard to argue he’s not challenging himself. “Guns Akimbo” is an action film filled with dark comedy and Radcliffe seamlessly embodies everyman Miles, who hates his everyday life and doesn’t feel alive until he’s online, which is fairly relatable. It might not be anything breathtaking or revolutionary, but this is another role solidifying Radcliffe requires more attention and can absolutely transform into any character if given the chance. What helps his case once again is having an amazing counterpart and scene-stealing partner in Samara Weaving. 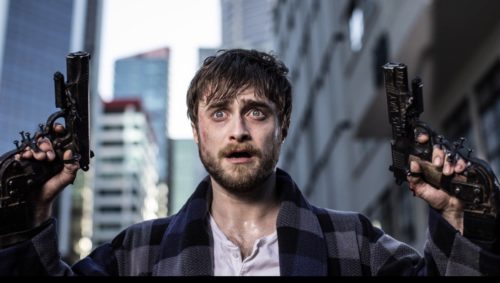 Samara Weaving works wonders again and is quickly becoming my new favorite film starlet. TV fans might recognize her from “SMILF,” but most recognize her as the beautiful badass in the highly underrated, underseen “Ready or Not” and for looking strikingly similar to Margot Robbie. However, her enigmatic energy previously seen in “Babysitter,” “Mayhem,” and “Ready or Not” is once again highlighted as an amazing, adrenaline junkie and killer in “Guns Akimbo.” Weaving is a breath of fresh air and needs to headline her own action franchise with strong, stunning characters in the vein of Ellen Ripley, Tomb Raider and Furiosa. Weaving’s ferocious, fanaticism foils perfectly to the mopey Miles creating an amazing dichotomy with wonderful chemistry in this non-stop fun film. Overall, it’s a gigantic thrill-ride thanks to its two leads! 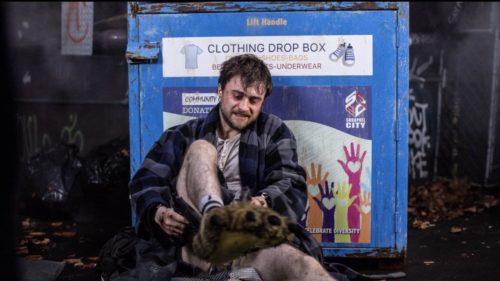 The vivid, videogame-like violence triggers terrific memories of first-person shooter games and is a bloody black comedy at its core.  Although it’s a fun film, the frantic familiarity of a loser becoming better and the hero (“Wanted,” “Straw Dogs,” and “Fight Club” immediately come to mind) is not a stunning story. Where it lacks character development, it more than makes up for fun and crazy visuals. Overall, it’s just a bloody berserk movie worth watching filled with tons of action. Now why haven’t you heard of this movie until now? Unfortunately, prior to the release, director Jason Lei Howden allegedly targeted film critics on Twitter in a sense of life imitating art with doing some cyberbullying himself. Sadly, his controversial comments certainly hindered more public awareness and combined with the pandemic, this film was released at the most inconvenient time slipping through the cracks. Thankfully its widely available via streaming! I strongly suggest seeing ASAP if you want blood, guts, gore and a good laugh with a phenomenal performance by Daniel Radcliffe.