Greetings, fellow horror fans, Big Mike here sharing a really cool experience I got to be a part of at the Arclight Hollywood on August 22nd, 2017. This year is the 10th anniversary of the release of Adam Green’s Hatchet. Now hardcore horror fans will know of Adam by his super insightful and inspiring podcast The Movie Crypt that he cohosts with fellow filmmaker, Joe Lynch. That podcast stemmed from Adam’s awesome little TV show Holliston that aired on Fearnet back when that network still existed. (Season 3 is in the works and hopefully we’ll be treated to that next year.) If anyone who listens to The Movie Crypt knows, is that life has been pretty rough on Adam, especially 2014, but I urge you to listen to Adam and Joe’s podcast to find out all aboot that, filmmaking from every aspect in the business and maybe even learn a little something aboot yourself, which I sure have. When it was announced that there would be a free screening and reunion of cast members from All the Hatchets I made sure I’d be in town to not miss this experience. The Hatchet series is Adam’s homage to the slasher genre we were lucky enough to grow up with in the late 70s to the early 90s. Victor Crowley is today’s Michael, Jason or Freddy with some awesome and waaay over-the-top gruesome kills that shouldn’t be missed by the old school horror fanatics. (It doesn’t hurt to have Kane Hodder as Victor C. since he played a pretty menacing Jason Voorhees four times in the Friday the 13th series.) When the trilogy ended back in 2013 Adam said that would be it for Victor Crowley. He went on to other projects and hardships and said we’d never see Crowley again…until now. What was supposed to be a red carpet event for the original Hatchet turned into a premiere for the fourth installment in the series titled Victor Crowley. That rocked the house. There was a rumor of a special surprise and I thought it would be a Robert Englund appearance or something like that, but I was way the hell off. I was ready though. I had something for almost everyone related to the franchise. The carpet had featured a who’s who of the horror genre from Hodder to Felissa Rose from Sleepaway Camp, to Caroline Williams of Texas Chainsaw Massacre 2, to R.A. Mihailoff (Leatherface, Texas Chainsaw Massacre III), Derek Mears (Jason Voorhees, Friday the 13th, 2009), Dee Snider of Twisted Sister and even Adam’s buddy, Tom Holland. (The Fright Night/Psycho II Tom Holland, not the current Spider-Man dude.) 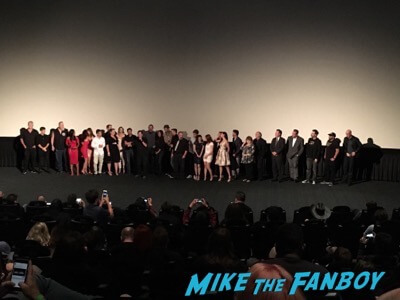 Adam explained to the theater full of excited fans that when he was at his lowest point the late great George Romero had a heartfelt discussion with him at a panel they did together a few years back. It was there that Adam was told he wasn’t done with Victor Crowley and that his contributions to horror truly did matter. Those words of encouragement re-ignited the spark Adam needed to re-introduce Victor Crowley back into our horror loving hearts and everyone in the theater that night got treated to a very fun blood-soaked feature with a ton of laughs and some cool cameos. Some of Adam’s best stuff so far. I can’t describe how fun the evening was. I brought a bunch of stuff along to get signed, as that was encouraged, and got some pretty cool graphs. My main items I wanted signed were my two Jason Voorhees figures and my Jason X hockey mask which Kane Hodder was awesome enough to sign. There were a ton of cast members from all four of the Hatchets so I was lucky enough to get a lot of them on my DVD slips. Sadly, my dumbass forgot a couple of my posters at home so I missed out on a wonderful opportunity there, but what can you do? I was also so excited I forgot to take pictures, which I’m trying to get better at, but this night was a fail in that department. It was still a great time and I’ll always be grateful I was able to experience it. Check out Ariescope.com to see when Adam will be touring near you with Victor Crowley and maybe pick up some merch while you’re there. Happy hatchet-ing folks. 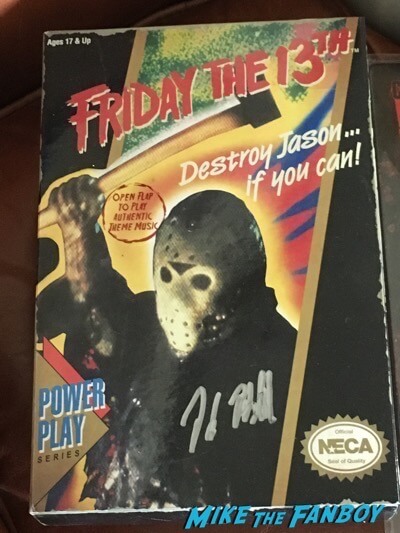 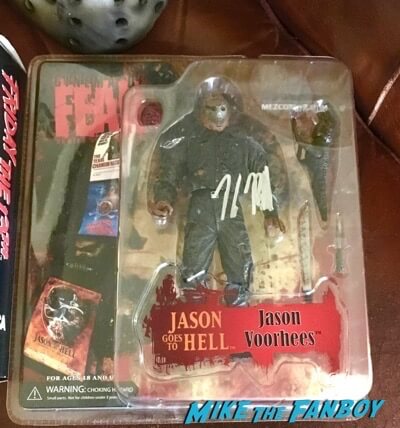 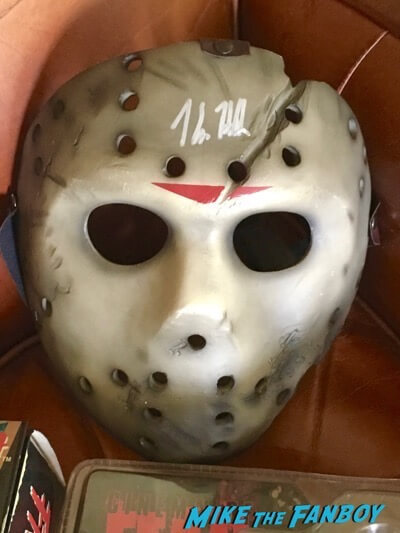 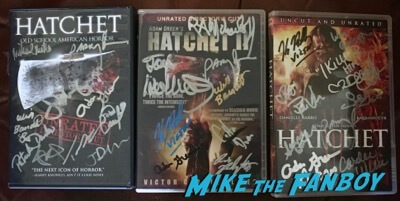 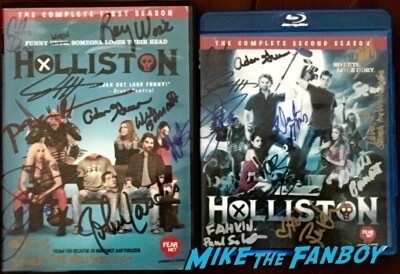