His name is Billy… Billy Beer.

His mission, to meet Hayley Atwell and not have his pen smear. It’s a hard challenge but is Billy up to the task? I don’t think so. However, Billy insists he is.

Is he right? Is he wrong? Or did he just drink too damn much?

I guess only Billy Beer knows.

Welcome back to Billy Beer’s Barstool. Today we are off to the LA Comic book and Sci-Fi convention to check it out and see the beautiful and talented Haley Atwell. I’ve never been to this show before, so I really have no idea what to expect. I have a cool Agent Carter picture I’ve wanted to get signed for a while. I figured this would be a better place than at a premiere where there is the chance of people bumping it, or getting a rushed signature. Sometimes when the price is reasonable, it’s worth paying for an autograph.

Now, I figured there would be a few people lined up, but since they said she would stick around till the line was done, I figured there was no rush to get in it. I decided to check out the rest of the convention before I jump in it. Right as I walk in the door, I see fellow Mike the Fanboy Whiner…I mean Writer.. Ace working one of the autograph lines. He was actually dressed up a little. I think there’s still a sweatshirt underneath that blue dress shirt hiding somewhere. After walking around a bit and not really finding anything I was hoping to find (that’s not a knock to the show, I was just looking for some specific harder to find comics), I decided it was time to wait in line for Hayley. Now the only complaint I would have is they need to get some air pumping in that place. After melting for a number of minutes I see Anthony “the fastest ant” and wave him over to have someone to talk to. 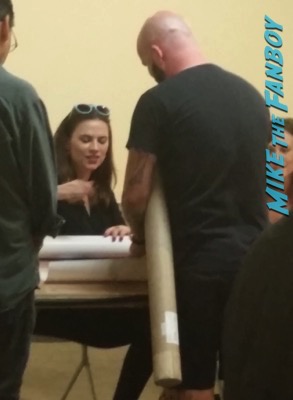 We have some fun discussions about Comic Con and other things and then it’s finally time for us to go up. 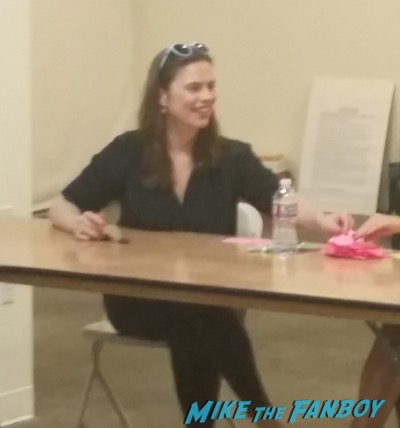 I see they have a number of different pens for her to use, but I ask her to use gold deco, that way I have nobody else to blame but myself if it comes out bad (am I right Scotty!!??). She’s very friendly, I mention the Dubmash war Agent Cater and Agents of SHIELD is having and how funny it has been. 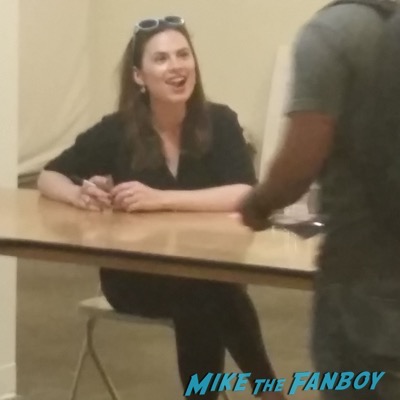 Then as a gift I gave her a 5×7 picture of Clark Gregg crying dressed as Agent Carter which she amazingly posted on Twitter.

Sadly they didn’t allow proto-ops, but my piece came out quite nice. Time to head back to Oceanside for a tasty beverage. Till next time! 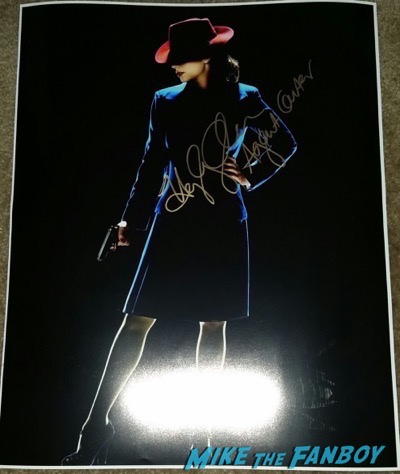