I have to tell you, there are fun encounters and then there are encounters that just make you so happy you are a Fanboy! One of the nicest celebrities around is by far Ms. Selma Blair. Jack had a great encounter with her a few days ago when she did a q and a with Todd Solondz.

I’ve liked Todd for a while even though I never saw Storytelling (yes, it’s on my Netflix list) but Welcome to the Dollhouse is on of my favs! Come to think of it, I should have been at this… Doh!
Jack did go and had a great encounter!

For two years I waited for a movie to come out. No, it wasn’t a blockbuster, but an indie film directed by cult icon Todd Solondz (Welcome To the Dollhouse, Happiness, Life During Wartime) called Dark Horse. Before Comic Con 2010 I attended a special screening of Life During Wartime at the Egyptian Theater with a Todd Solondz Q&A afterwards. Besides Life During Wartime being amazing (by the way, it was released directly to the Criterion Collection upon its home video release), Solondz was very accommodating with autograph and photograph requests after the screening.

At the screening, Solondz personalized both my copies of Happiness and Welcome to the Dollhouse on DVD. Hoping for a similar experience I headed out to the Nuart Theater for a recent appearance by Todd Solondz promoting his latest film, Dark Horse. My last event at the Nuart was a great success when I met Malin Akerman and Emmanuelle Chriqui, who signed multiple autographs for everyone in the theater, which was about 10 or so people who showed up for the Elektra Luxx screening. 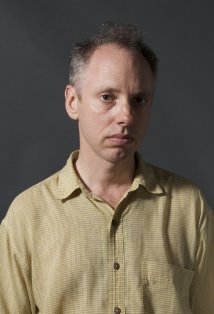 When The Movie Geek (Marc Edward Heuck) from Beat the Geeks was the manager of The Nuart he famously remarked at a sold-out Kevin Smith Q&A in 2003, only five people showed up for a special Q&A screening of the original Cape Fear with director J. Lee Thompson. So you never know what to expect for a Q&A event at the Nuart. Considering a sold out audience showed up for the Egyptian screening and Solodnz makes a movie every four years or so I had a gut feeling it would be a cool event.

Days leading up to the event my friend Dave had to bail because his parents were making a last minute stop from the East Coast. To make up for it, two other guests were announced to appear with Solondz: Selma Blair and Justin Bartha. Ever since Cruel Intentions I have possessed a massive crush for Selma and have literally seen everything she has ever been in, including Kath & Kim. Although everyone knows him as “Doug,” movie geeks should remember him as Brian, the second male lead in the infamous Box Office Bomb and Razzie award winning Gigli. However, I’m actually a huge fan of Bartha’s indie work, especially the underseen Holy Rollers, which contains two great performances by him and Jesse Eisenberg. Three stars at one Q&A event….I really hoped for the best. 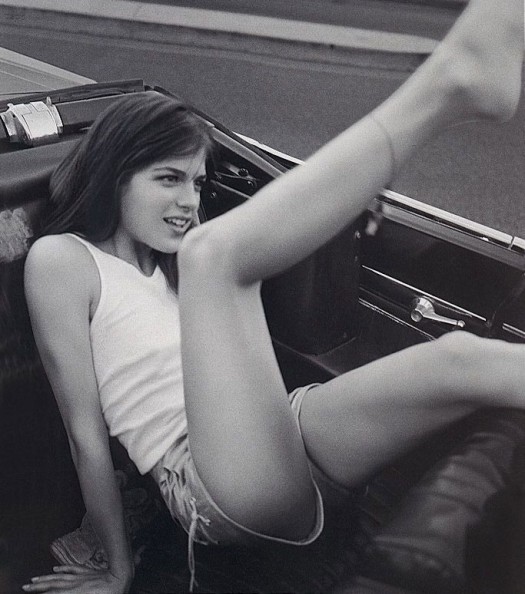 7:00p.m. – Got off the Santa Monica Blvd off ramp and started circling around looking for parking. Unfortunately because I drive a truck it’s impossible to find adequate street parking.  Every single street possessed contradicting info and/or too small spaces (only Bugs, Smart Cars, and Mini Coopers could fit) so I decided to park in one of the “two hour parking” lots located nearby.

7:08- Started walking towards the theater and I spot six dealers hanging outside the theater on the corner. This image doesn’t give me confidence, but I disregard their presence. After picking up my ticket I walk right inside the theater and pick a seat in the first several rows. Regardless of obtaining any autographs tonight I really want to enjoy the film. That’s one rule for me. I will not attend a film Q&A unless I really want to see the movie, regardless of whose making an appearance. 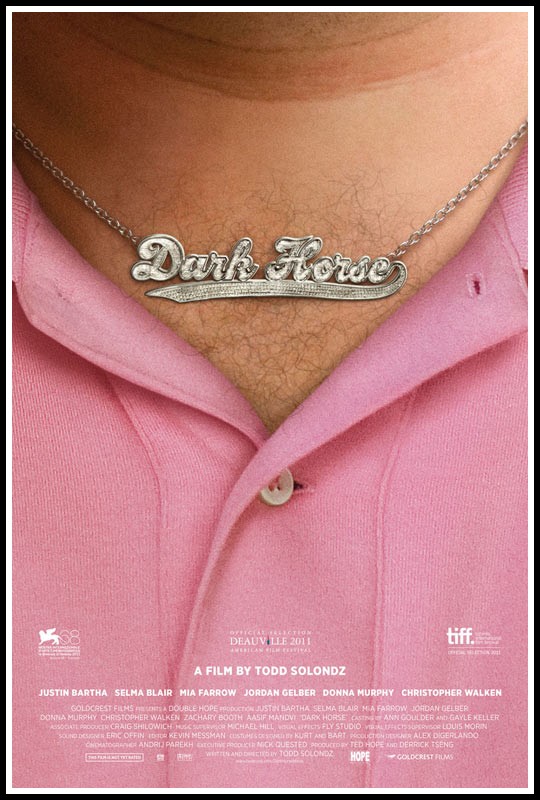 7:30- Movie starts and upwards of 75% of the theater looks sold out. After a couple of trailers start, Dark Horse begins.

9:10- The movie ends and I was really blown away. The film was one of Solondz best and once again got great performances from all his actors. I highly recommend this film and it would probably be best described as an “arrested development” version of a Judd Apatow film.

9:12- Selma Blair, Justin Bartha and Todd Solondz are introduced and walk past me. Selma looks stunning. They answer various questions regarding the film and their careers throughout the Q&A. Some cool tidbits revealed during the Q&A:

-Selma Blair’s character is a continuation of her character from Storytelling -Mia Farrow only did the movie because her son said she SHOULD be in a Todd Solondz film -Throughout the movie Christopher Walken and Mia Farrow appear to be watching “Seinfeld,” but actually Jerry Stiller, Estelle Harris and Jason Alexandar recorded lines written by Todd Solondz

9:35- The Q&A ends. Justin Bartha and Selma Blair both say goodbye to Solondz and take off. Bartha is the first to pass by and I quickly pull out my copies of The Hangover (already signed by Zach Galifianakis and Ken Jeong) and Holy Rollers. Justin grabs my pen to sign The Hangover and he bolts literally right after. I didn’t even have time to tell him how much I enjoyed Holy Rollers and it actually appeared like he didn’t want to be there. 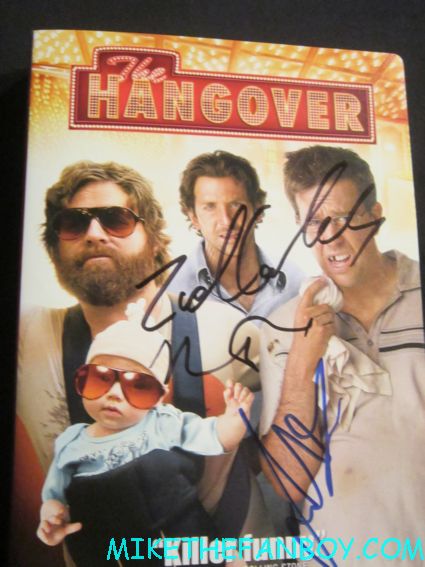 Then Selma Blair comes by and I attempt to pull out my Storytelling DVD when I accidentally drop a Dark Horse promo (handed out in the lobby). Selma alerts me and actually picks it up for me (that really impressed me and I love her even more). I ask her to sign my Storytelling DVD and she graciously obliges giving me arguably the best autograph I have ever seen of hers. I debate about asking for my Cruel Intentions DVD insert, but don’t want to seem pushy since I have been the only one asking for autographs. 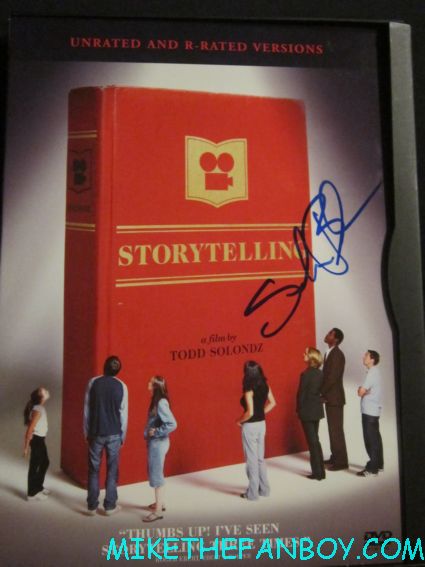 Actually, after Selma signs Storytelling she anticipates me asking for another autograph, but instead I talk to her about her character from Storytelling. We discussed creative writing courses and how the film perfectly captures the absurdity, yet painful truths of revealing stories addressed in college classes. We also briefly talked about her career and she took off. Subsequent people up the aisles asked for photos and I looked on regretting being unable to find my camera at home L

While waiting for Todd Solondz I overheard one audience member ask him a question I have been dying to hear resolved. For Storytelling a “third chapter” was filmed with James Van Der Beek, but nothing sufficient is posted about it anywhere. As it turns out, Solondz filmed a small segment with James that was to be like an epilogue/buffer (not a full length segment like “Fiction” and “Non-Fiction”) that was only two minutes long. Solondz doesn’t know if it will ever see the light of day again.

After answering another question, Solondz continues greeting a few fans and finishes taking a picture when one of the Vitagraph Film publicists/employees (distributors for Dark Horse) says he needs to go. Despite this, Solodnz keeps answering questions and starts leaving for the theater lobby. While leaving he graciously agrees to personalize my Life During Wartime insert, but signs the insert upside down. 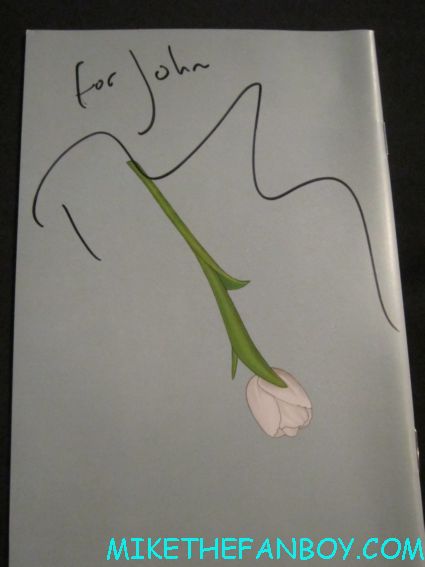 Still, I managed to snag three autographs so I can’t complain. If you haven’t already checked out the film go see it. I also highly recommend visiting the Nuart Theater if you consider yourself an indie film buff.

Until then, happy autograph hunting!