Home / Fanboying! • JM / JM Feasts On Some Fava Beans After Meeting Jodie Foster At Her Q and A! Autographs! And More!

It’s funny how certain things come full circle. Growing up, my parents always allowed me to watch R-rated movies, but made sure to put it in context.  When I was in the second grade my best friend Danny and I watched “Silence of the Lambs” over the weekend.  Sometime during the next week we made reference while waiting in line simply stating, “it was so cool” by name. As you can imagine, our teacher talked our ears off not to discuss the film ever again. Looking back, my teacher was mortified, but considering we went to a Christian private elementary school we absolutely got off pretty much scot-free.

Now years ago I was very fortunate to meet Mr. Hannibal Lecter a.k.a. Sir Anthony Hopkins at a TV show taping with Scotty The Music Man, Karalee and CB making the trip. Thanks to a unique item I lucked out and was hoping for a similar success with Jodie Foster for an upcoming appearance. I reached out to Scotty for his opinion considering I have a unique “Taxi Driver” item, but know she avoids Taxi items because of the tragedy associated with the movie. Mike was sadly not responding, but I assume he was just editing my movie reviews.

In Hollywood there was a cool double feature screening of “Alice Doesn’t Live Here Anymore” and “A Woman Under The Influence,” which was part of a series featuring films by Martin Scorsese and John Cassavetes. Sadly, I wasn’t able to attend any of the other screenings and found it pretty unique Jodie Foster was doing a Q&A for this film. Regardless I was stoked to see the double feature and hear a two-time Academy Award winner talk, especially when it’s Clarice Starling.

My buddy Dave and I decided to grab Mexican food before we strolled down to the screening. We were surprised the theater wasn’t as packed (considering the time) and the caliber of Jodie Foster, but it shows you never know.  We managed to find a seat up close and made friends with our neighbor, who is a huge fan hoping to work with her one day. Eventually the theater packed in before the screening.

Now it had been a few years since I saw “Alice” and to see it on the big screen was unbelievable. I love being able to see a 35mm print with all its imperfections. To me it adds a lot more character and adds to the overall experience. Unfortunately, one of my neighbors literally put down their stuff and quite literally missed 60-90 minutes of the movie, probably trying to get Jodie Foster outside the venue. Surrounding us in nearby rows were Chatty Cathys talking nonstop and people whose phones kept ringing, which was frustrating.

The movie came to an end and luckily there weren’t any seats with people jockeying for a better shot. When Jodie Foster walked by, it was kind of surreal considering the iconic character of Clarice Sterling and the cultural impact of her career.  It was awesome and badass to see her live! 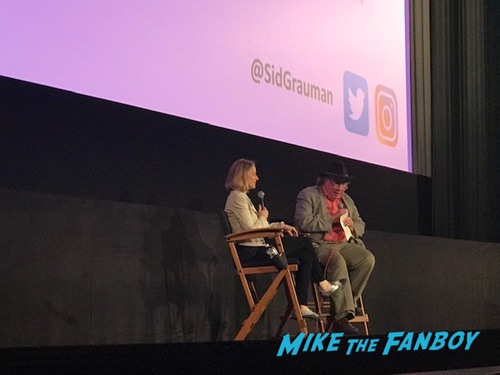 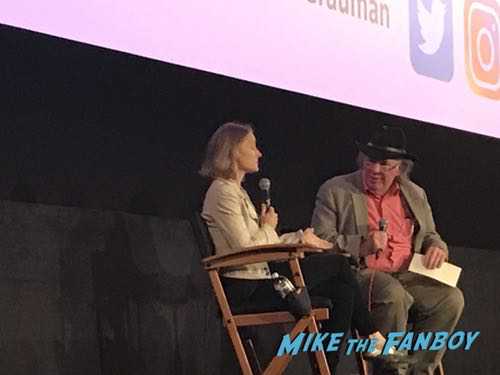 The Q&A was extremely interesting as Jodie Foster even joked it’s weird that “I’m here discussing this movie here and not someone else. I feel like I’m talking on behalf of Scorsese,” which got some good laughs. The moderator kept on bringing up “Taxi Driver,” which is understandable, but seemed a tad awkward considering she was there to discuss a different movie. However, Foster admitted she really doesn’t remember making the movie too much. As she points out, this was Scorsese‘s third movie and by this time she had already done dozens of films. 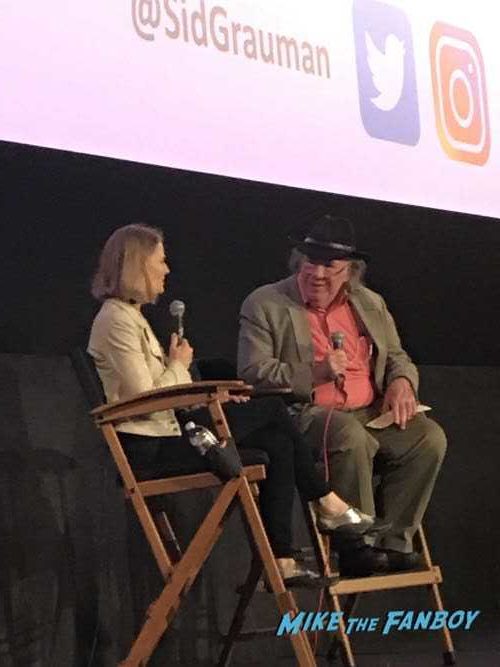 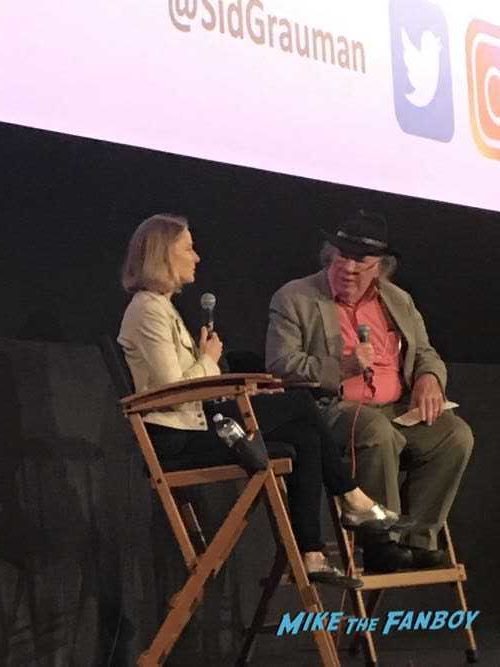 The only thing she really remembers was hanging out with Ellen Burstyn‘s daughter, Laura Dern (her mother Diana Ladd co-starred in the film), and Alfred Lutter (played Tommy, the character she befriends in the movie) swimming constantly in pools. Even years later she still recalls the criticisms of her short hair as she was filming the “Paper Moon” TV Show and they really had to emphasize her attire because she didn’t come across feminine in the film except her dresses. 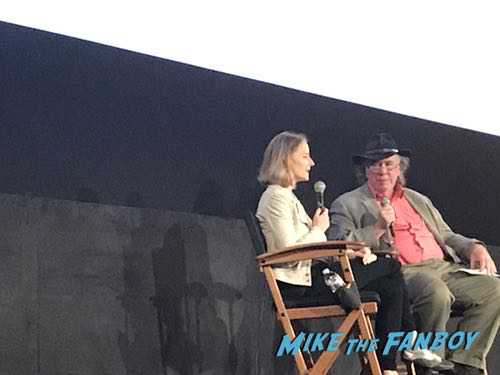 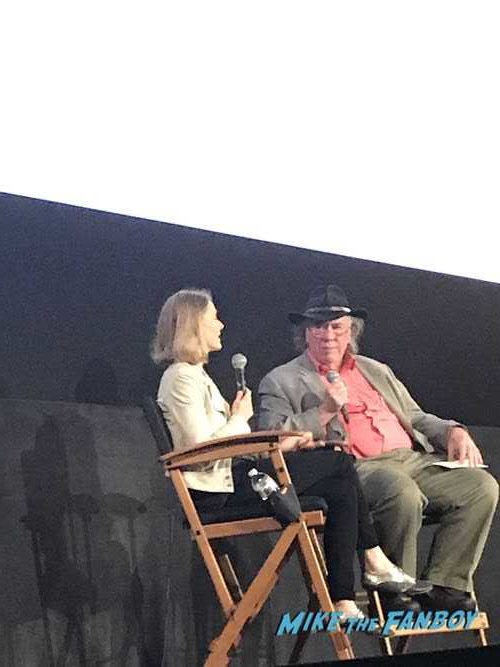 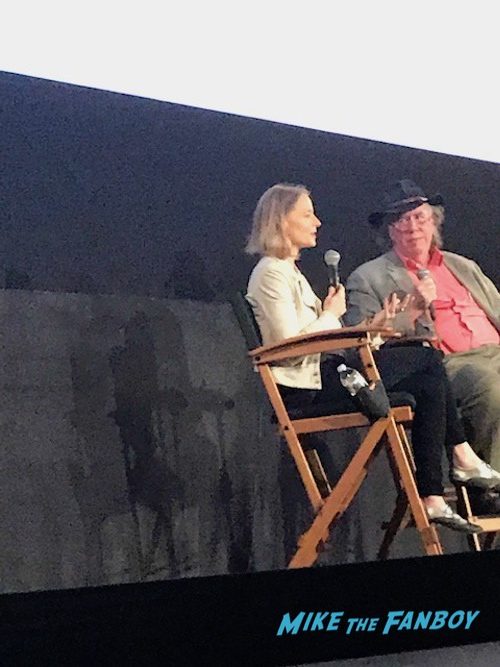 Foster had a good laugh discussing her tomboy appearance and talking about her experiences working with De Niro and Scorsese. It was really cool to hear her talk about her respects, reverence and admiration for both. Foster even credits De Niro for allowing her “to actually act as a character” and not just play herself, which was something she did up until that point. 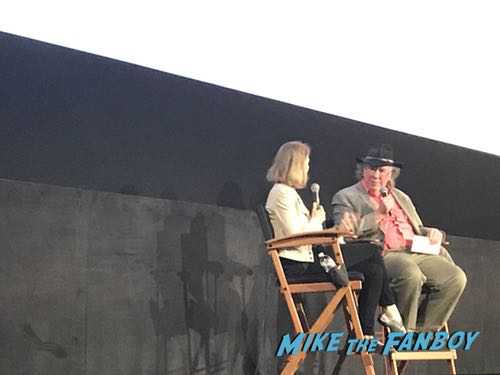 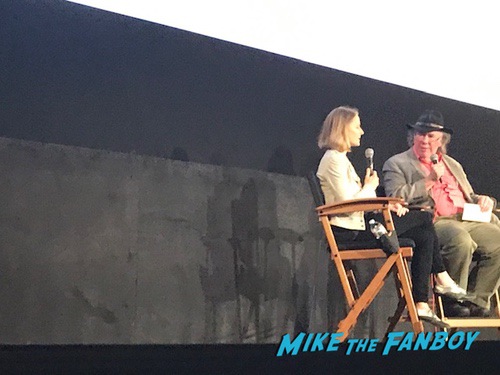 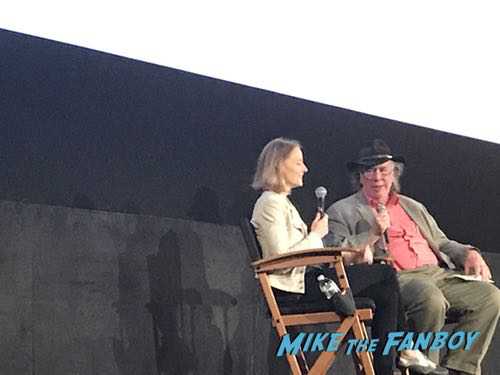 As the questions winded down, I knew it was going to be an interesting situation. Sure enough it got crazy, but thanks to my buddy (and a HUGE PROPS to his assistance), I really lucked out. As soon as Foster walked off stage, Jodie essentially made a beeline for me while chaos was going on all around with security shielding her from it. She grabbed my sharpie and signed my laserdisc very large with me thanking her in the process. The autograph came out amazing and I literally held onto it for dear life as suddenly when she started signing I could sense pushing and shoving on my right hand side. She managed to sign only my laserdisc and I believe only two DVDs with the guy directly to my left, the guy who literally missed almost the entire movie before she handed back my sharpie before exiting.

I quite literally attempted to get out of the chaos, but couldn’t escape or find my friend despite he was “standing next to me” moments ago. People began exiting shortly thereafter and the next film started with no intermission. However, the theater blocked off all the exits and we were forced to only use the one main theater exit instead of the side ones too. Once we were finally able to escape the theater, my buddy informed me security tried to discourage Foster and that he helped block off the bum rush for a few moments before being trampled. Thanks to his assistance I really lucked out!

Honestly a huge shout out to Jodie for signing despite the atmosphere. I later found out from Scotty The Music Man, apparently she did sign outside, but there weren’t as many collectors so people were able to get multiples. I didn’t follow up to see if it was before/after, but that’s the way the Autograph hobby goes sometimes. Seriously so stoked to finally say I have a Jodie Foster autograph. As Scotty even joked, it seems like everyone has a “Silence of The Lambs” autograph by Jodie Foster. Until the next time! 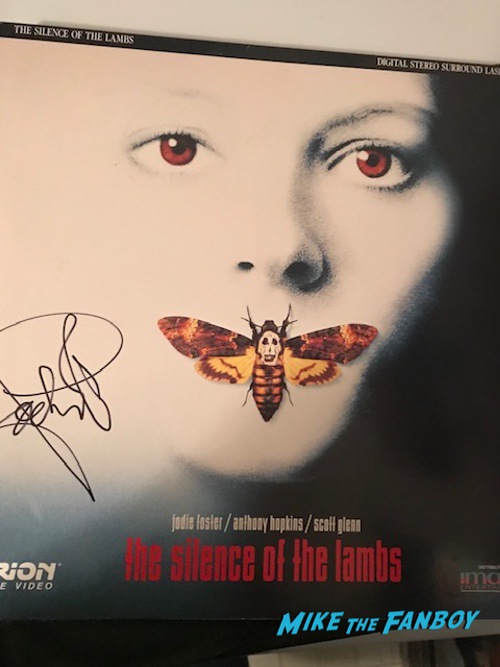