I am such a Mad Men fan! I love LOVE the show and honestly I think it’s one of the best shows on television right now. Anyway, with that said, no one is a bigger fan of Christina Hendricks than CB, so when I got invited to a special Q and A with Jon Hamm, Christina Hendricks, Kiernan Shipka and Mad Men creator Matthew Weiner, I said to CB… Christi-

And that was it… School girl shrieks, dropping of the phone and mad text messages… For a week i got the following texts… “Are you going?” “What should I bring?” “Can I get a photo?” I think he donned a Batman cape and started shooting grappling hooks up to the ceiling he was so jazzed.

Sigh… Also joining in on this little adventure is Awesome Anushika and Lindsay from the amazing www.iamnotastalker.com.

5:45 p.m. – I’m not writing this, I’m speaking it into my Sprint Google phone… I am lost, I was supposed to be there at 6:00 p.m. and instead I ended up in Pasadena turned around on the 110. Did I mention I am directionally challenged? It’s true, can’t make that shit up.

6:05 p.m. – CB just fell off a bench and landed on the floor. To be honest he didn’t fall off a bench so much as… missed the bench… by a whole buttocks.

6:15 p.m. – How long do you have to wait after the obligatory “Are you okay?” Comments to laugh your ass off… no pun intended…

6:22 p.m. – I think CB is just really nervous about Christina Hendricks… I mean I know how I was with Mary Louise Parker on the set of Weeds, so I get it.

6:31 p.m. – I’m really here for Matthew Weiner and Kiernan Shipka. I love getting the random people and Kiernan in particular is AMAZING on Mad Men! Like Dakota Fanning good… Plus, a photo with Christina Hendricks… that would be great! I love Joan; arguably, she’s my favorite character on Mad Men!

7:03 p.m. – So, we are inside and picking out seats. I’m still jazzed about the free popcorn and soda… Ah… Popcorn, only a second to salsa…

7:21 p.m. – Oh, they are about to introduce the episode we are watching. It looks like it will be episode 9 The Beautiful Girls…

8:17 p.m. – Dude another great episode from Season 4! Man… Kiernan Shipka was amazing in this episode. AMAZING! 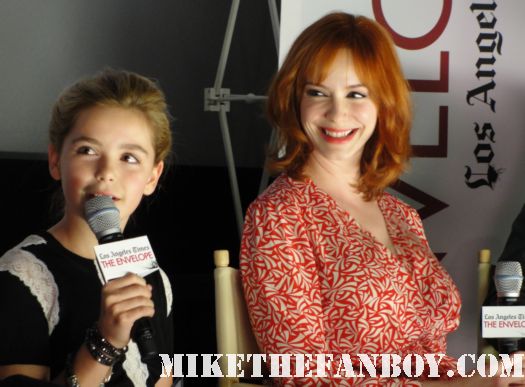 8:31 p.m. – the Q and A is really focusing on this particular episode and they are even talking about the death of Miss Blankenship and how that was a turning point for a lot of the characters in the series… 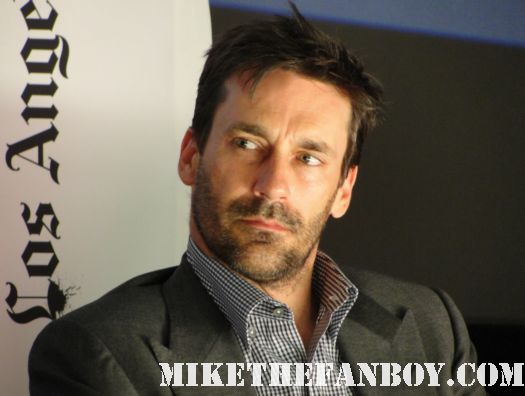 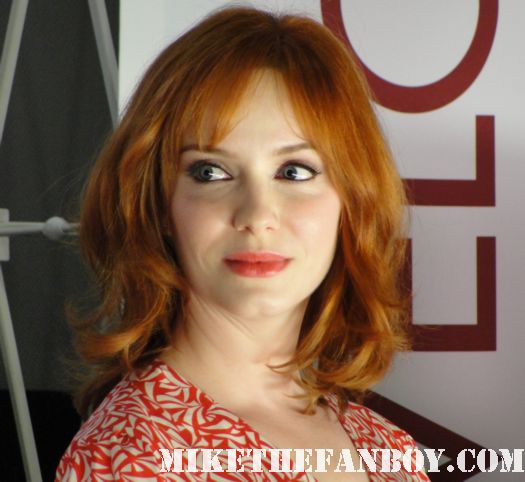 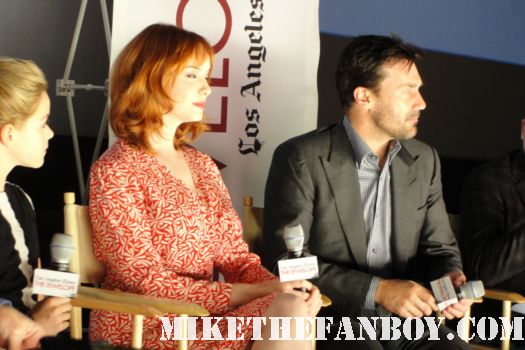 8:52 p.m. – Oh, the subject of the contract dispute is coming up, and Matthew Wiener handled it really well.

I really liked his answer! 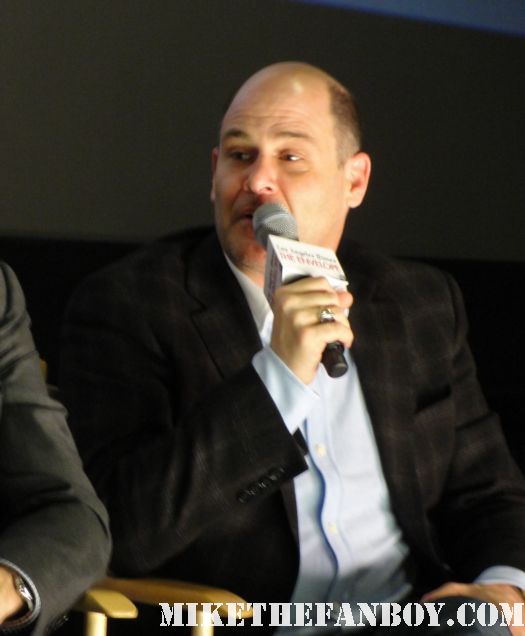 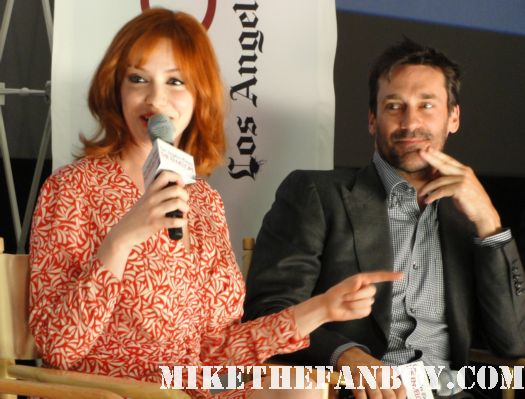 9:02 p.m. – Kiernan Shipka is like a little Dakota Fanning. I’m serious. She is just handling herself so well. 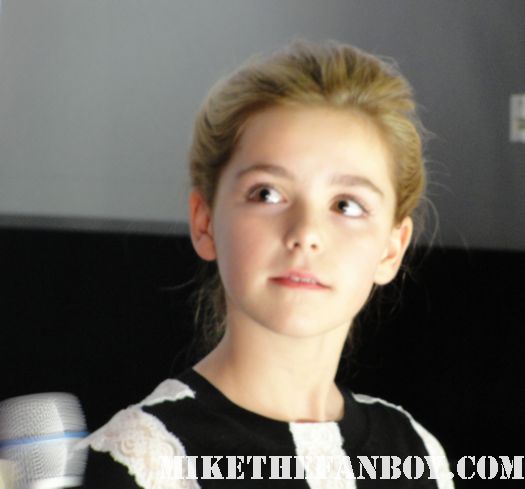 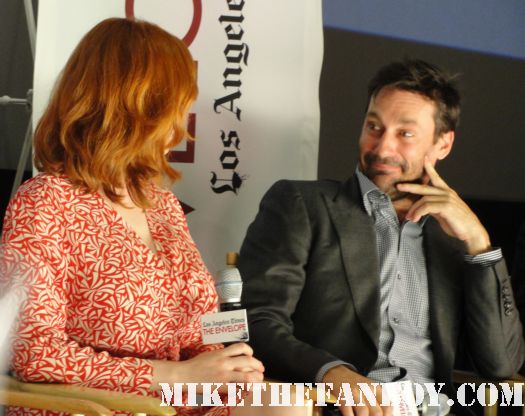 Damn, they are ushering the cast out… CB takes off like a banshee flailing like a schoolgirl, and even though we call out after him, he doesn’t listen. Anushika, Lindsay and I leave the other way.

9:15 p.m. – We are on the side of the building now, and I just see Kiernan Shipka about to leave, and with the help of John another fan she signs one last autograph on my poster before heading in the car. 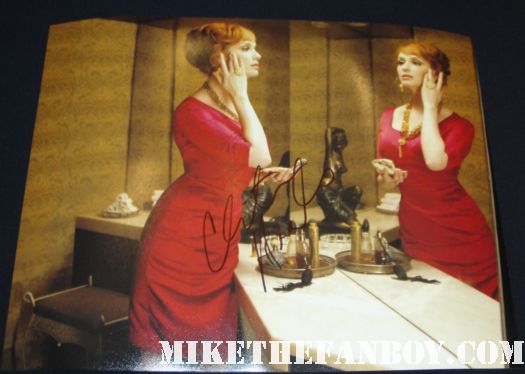 9:18 p.m. – Then I spot Matthew Weiner leaving and run over to grab him on my poster. He is so nice as well, and is happy to sign my poster. I think he’s super jazzed someone wants him to sign actually! Lol…

9:19 p.m. – I head over to Christina Hendricks and she does a photo with me and a photo with John. And Anushika and Lindsay! 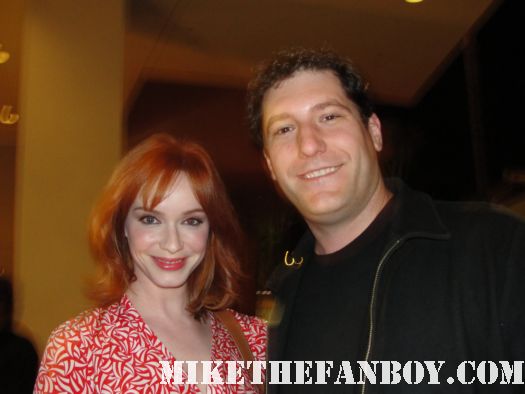 CB… He’s gone; we don’t know where he is! Sigh… He’s really like a ninja this time… 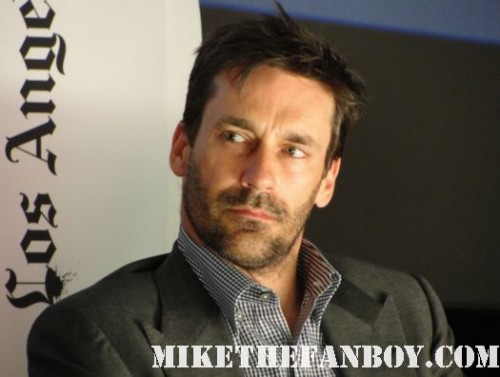 9:21 p.m. – Christina Hendricks says goodbye and we thank her, and she just is getting in her car when we see CB around the corner… Dude, he missed everything… Sigh… Jon Hamm left before we even saw him.

9:23 p.m. – Poor CB is devastated… I’m so sorry buddy… I mean it actually. He’s a sad little toaster! I’m sure he will get her again though. I mean, everyone from the Mad Men cast I have met is super nice! 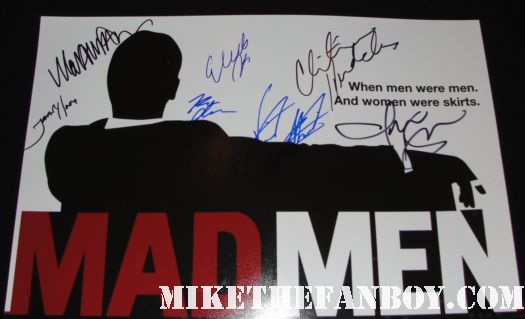