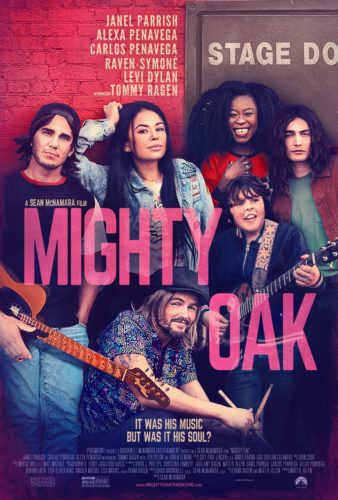 Kick out the Jams and get ready for some Kidz Bop! From the director of “Soul Surfer,” Sean McNamara’s latest tune “Mighty Oak” struggles to find the right rhythm and genre.

Up and coming San Diego band Army of Love seems to be going places with lead singer and guitarist Vaughn Jackson (Levi Dylan). However, while on the way to a life-changing gig in Los Angeles, a fatal car accident forever changes the band. Even after 10 years, Gina Jackson (Janel Parrish), Vaughn’s sister and band manager, still can’t cope with the loss and buries her emotions with gambling & booze. While looking to pawn her brother’s valuable guitar, Gina discovers guitar prodigy Oak Scoggins (Tommy Ragen) and believes he is her reincarnated brother. Inspired by Oaks’ talent, Gina believes it’s time to reunite Army of Love and allow the band to shine once again.

Everyone enjoys cheesy comedies, but when you take yourself too seriously that’s when it’s not funny, even for a family film. Sadly, “Mighty Oak” doesn’t know what genre it wants to be and struggles mightily to get through a set. Somewhere in between “School of Rock” and “The Rocker” with a preteen mentality, “Mighty Oak” ostensibly struggles tuning its story and ludicrous concept. Can anyone realistically believe a 10-year-old would join a band with thirtysomethings, let alone front it? Sure, guitarist Paul Reynolds joined A Flock of Seagulls at 17, guitar prodigy Jonny Lang recorded an album when he was 15 and Orianthi jammed with Steve Vai & Santana by 18, but in what fantasy film does this realistically happen? The only logical way is suspending disbelief and unfortunately that mindset soon becomes your mantra for this family film.

Let’s pretend you do buy into the concept of a well-established band of thirysomethings overwhelming and almost instantaneously accepting a grammar school child to front their recently reunited band. What about the band’s following? Blind Melon and Alice in Chains toured after their lead singers died, why couldn’t Army of Love? Even for a low to mid-level alternative and indie band, especially considering the boon of indie bands from 2000-2010, would suggest a small nostalgic factor and following, even if it’s at the local scene. Considering they were about to open for one of the biggest bands in the past 20 years, Arcade Fire, a small following would seem logical. However, let’s circle back and focus on that aspect, opening for Arcade Fire. Army of Love… opening for Arcade Fire during their “Suburbs” tour, which they would later win the Grammy Award for Album of the Year? I quite literally spit out my soda laughing hysterically at the idea, especially since they didn’t play the (Hollywood) Bowl, but the Shrine Auditorium in Los Angeles in 2010 with two, not three shows. Small possibility as it’s common to recruit “local bands” for shows and maybe pretending it’s an alternative reality, but if that’s the case why was the first reunion show of Army of Love FREE? Unfortunately, these incredulous oversights propelled the concept from cute comedy to unintentionally funny.

Like music, different dramatic styles suit everyone differently, especially a music dramedy like “Mighty Oak.” Despite a strong showing from real-life guitar prodigy Tommy Ragen, who does a great job, the filmmakers force too many concepts into the movie. There’s a love story, redemption arc, accomplishing your dream, overcoming deaths, etc. all swirling around and comes across as a jumbled jam session. As Bassist Alex (Nana Ghana) states in the movie, was this a MAKE A WISH?

Tonally and look-wise it definitely reminds you of cable TV movies like “Lemonade Mouth,” “Naked Brothers Band,” and “Camp Rock” meets a sophisticated premium cable movie with average acting and completely cliched, forgettable music. There is higher production value, but unless you’re looking for a family film and uplifting message it might be best to skip this concert. Ideally great for grandparents or family gatherings to enjoy.