There’s nothing I like more than a Joss Whedon story. I am a huge fan of the Buffy creator as you probably can imagine. LOL… I love his humor, his wit and pretty much everything he puts his hand to.

When he decided to put his hand to Shakespeare, a lot of people scratched their heads, but I thought it was an awesome idea. I still haven’t seen it yet… Sigh… but it’s on my list to check out.

Jack did check it out along with a q and a with the cast.

Check out this week CCC below!

Third times the charm. Although I’m not as die-hard to Whedonverse as Mike I do consider myself a Joss Whedon fan. Back in the early 1990s, “Buffy The Vampire Slayer” was released in theaters starring Kristy Swanson and Luke Perry, but didn’t really connect with audiences. Thanks to loving horror in my adolescence my parents bought me the VHS when it came out and I was hooked. A few years later, Joss developed the movie into the hit cult TV series starring Sarah Michelle Gellar and I was hooked. 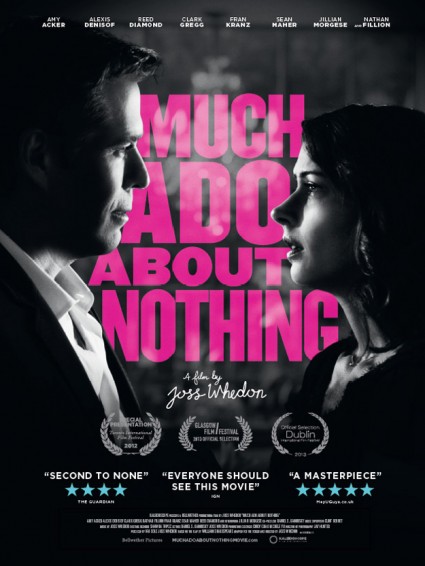 Over the years, Joss wrote for Disney (nominated for an Oscar co-writing “Toy Story”), created a few TV shows (“Angel,” “Dollhouse,” and “Firefly”), wrote a few films (“Cabin In the Woods” and “Alien Resurrection”), created the most famous webseries ever (“Dr. Horrible’s Sing Along Blog”)  and directed a movie (“Serenity”). Eventually the Geek universe rejoiced when Whedon was selected to direct “The Avengers” and as we say, the rest is history. 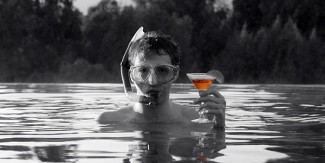 Thanks to his new independent film, Joss Whedon and his cast have been out promoting the film “Much Ado About Nothing,” which is really good. However, I have tried twice unsuccessfully to meet the man. First he was at Neil Patrick Harris’ Walk Of Fame ceremony, but didn’t sign unless you walked across the street with him leaving. I stood directly across from him, but sadly he ignored all requests maybe because there were tons of dealers by me holding up Avengers posters while I held out Buffy and Dollhouse stuff.

The second time happened at a low key members’ only screening of “Much Ado About Nothing,” which Mike attended. Sadly by the time I arrived Joss just went in (by moments) after having a full-fledged conversation with Mike for five minutes. Fortunately for me I got invited to a special Q&A screening on Friday and managed to get a ticket before they sold out sitting near the front. However, I will say some of Whedon’s fans are some of the most pretentious and douchiest people I have ever had the displeasure of sitting with in a sold-out theater (Ok, maybe just the 8:30 crowd at the Dome, but shut the hell up!!!!) Not only did some people talk through the trailers and film, but some had running commentary. I hate film crowds like this.

On that day, the cast and Joss were doing four Q&A’s back to back plus one film Intro at two different theaters across Los Angeles. Needless to say they were running around all evening. A friend of mine attended the 7:45 Q&A, but texted to tell me the Q&A only had time for one fan question (which was stupid) and they were rushed out. I was starting to get worried because the cast hadn’t shown up for my Q&A yet even though the movie ended a few minutes ago. Even the movie theater crew apologized and said they were escorting them away from another screen to come over here quickly. Joss was then joined by eight of the cast including Alexis Denisof, Amy Acker, and Fran Kranz. 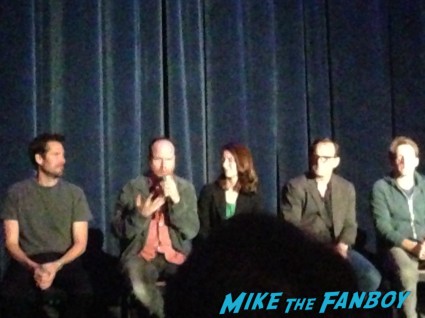 Although the Q&A was pretty entertaining, the lighting sucked for the theater thus the poor quality pics. Here are some recaps: 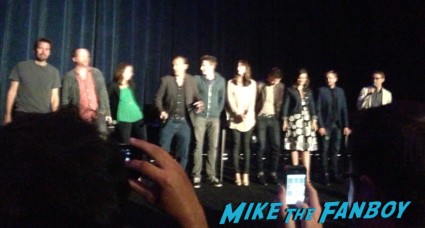 -Clark Gregg was asked to do the film after The Avengers, not knowing the TV show “S.H.I.E.L.D” was happening and was still bitter his character died. 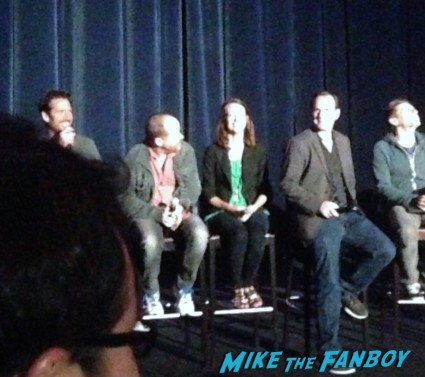 -Joss physically walked over to Alexis Denisof’s house to ask him to be in the movie, but he thought Joss was telling him in person his role in The Avengers was recast

-Amy Acker admits that every time she see Joss’ name pops, “She’s willing to say Yes before he says a word,” which Joss gave a great response to with a gigantic smirk.

After only maybe five or so questions, the Q&A ended without the audience being allowed to even ask a single one. What’s the point of having a public Q&A if we can’t ask a single damn question? As soon as it ended, security descended upon the cast escorting them before anyone had time to even stand up, let alone walk over to them.

Outside there were a handful of collectors waiting by the celeb’s car and the cast huddled near security until things died down. I passed by Fran and debated about getting his autograph, but decided it was Whedon or bust. Eventually they blocked everyone away, which caused more of a scene, but the cast snuck into the main lobby unnoticed. Joss then started to take a pic of some cast with the “Much Ado” poster and I got my parking validated after taking a picture of him doing so. 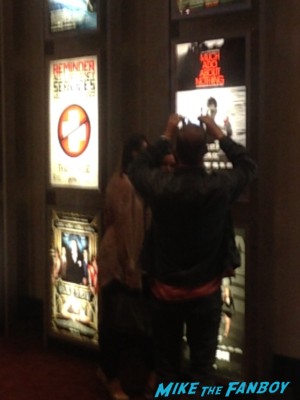 Recognizing I might have a shot I waited for Joss to finish taking his photos on his phone and approached him when another fan did the same. Unfortunately for me I grabbed “The Avengers” Blu-ray in my bag instead of my “Buffy” and “Dollhouse” stuff, which I wanted signed more. Joss signed for one fan before taking my Blu-ray, but started walking away towards the upstairs bar. He quickly signed it near the top and gave me back my Sharpie after thanking him. As far as I know, we were the only two from the screening to have gotten autographs since Security blocked everyone else. Overall, I’m happy to have finally met Joss in a relatively “non-hectic” setting and hope more people check out ‘Much Ado.” 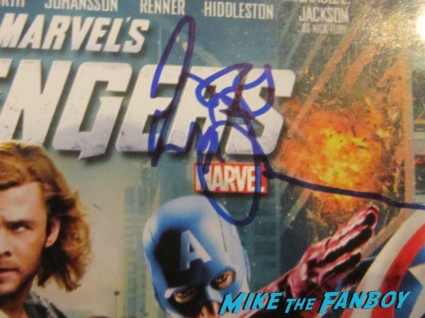