Home / Billy Beer's Barstool • Fanboying! • Sexy... damn sexy / Olivia Munn Shows How Awesome She Is To Fans But Gerard Butler Does A Drive By And Billy Doesn’t Have A Chance To Yell I AM SPARTA! Doh! Autographs! Photos! Magic Mike Sexiness!

God bless Billy Beer! Even while he’s in the cold arctic tundra of Michigan he still sent in this great report about meeting Magic Mike star Olivia Munn. I will admit I’m not all that familiar with her body of work, I do however know the other person who she is sharing a talk show stage with… Mr. Gerard Butler!

I think everyone here at MTF is a huge Gerard Butler fan, I myself couldn’t head down today, but Billy Beer is hoping for some success! So, take it away Billy!

Today at the bar we have the ladies man Gerard Butler, and the always nice Olivia Munn. Gerard is out promoting a new holiday movie with Jessica Biel in it. I can’t even tell you the name of it, it looks so bad. Jessica must have had a wedding to pay for, and Gerard must have been REALLY bored.

Olivia has a couple of things she could be promoting. She’s guest starring on The New Girl, is starting the second season of The Newsroom, and since she’s super nice and hot, she can stop by any time she wants. I get there a little bit early today. “Supposedly”, Gerard got there early last time. So I was hoping to get him on the way in.

Here’s something that some of you might not know. Gerard has a pretty big following of middle aged women who call themselves Gerry’s Girls. You don’t mess with Gerard until his girls have gotten to talk to him. They are CRAZY FOR GERARD! Like C.B. around Paul Walker crazy.

I brought a picture of him with Sparty at a Michigan State football game for him to sign.

As for Olivia, I brought 3 things. A cute picture of her, a picture of me and her, and the main thing, a 11 x 14 picture of her in a bikini. I have a friend back home that really likes her. Every time I post a picture of her, he comments on it. I told him I would try and get it personalized for his man cave, and he asked if I could get her to write “don’t tell your wife” on it. This sounds like a challenge. Not a hard one, but never the less. Gerard is the first to arrive, and he drives right on past.

When he gets out of his car, he does wave over, which usually is a good sign. I guess not enough of his girls were here yet. Olivia arrives about 10 minutes later. Same thing, she drives right on past. Oh well, I usually don’t have good luck on the way in anyways. They’re not done up yet, and they still have to do a show. The show is finally getting out, and here comes the herd.

WOW, everyone is stopping in hopes to see the guests.

About 20-30 of Gerry’s Girls line themselves up and the waiting game begins. One of the graphers notices that a limo went out the side exit. Uh Oh! This could be bad. After another 5-10 minutes, one of the limos finally makes it’s way over to the now mob of fans.

Sometimes people roll down, but she gets out and starts going down the line. She’s shaking hands and taking pictures. C.B. goes running over to where she started. Yelling for me to give him my big picture and he’ll get it done. After I specifically tell him what I want on it, he runs over. Olivia is a machine. We call for her to come down, and she politely tells us she be down here. So we wait.

Olivia is finally up to me.

Now thinking I’m funny, I tell her it’s finally nice to meet her, and then give her the picture of me and her together to sign. She kinda half smiles like nice try funny guy. Oh well, that’s why I’m not guest starring on The New Girl. 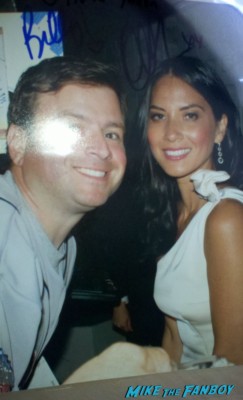 I then give her the picture she already signed and asked her if she would put “don’t tell your wife” on it cause it’s for my friends man cave. Without hesitation, she does it (never send a boy to do a man’s job). 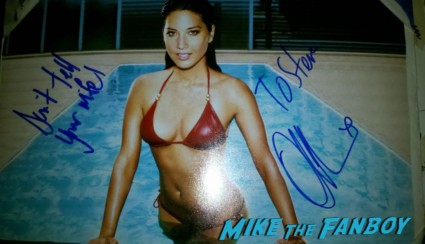 She then signs my third picture, and then poses for a picture with me. I tell her good luck on the show, and I can’t wait to see it. She thanks me and then goes on to the next person. 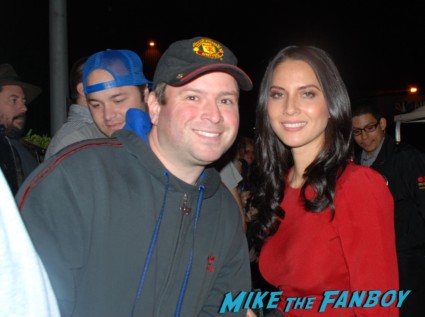 Now this whole time we are still waiting for Gerard. But nothing, all the limos are gone. Did Gerard really just diss his girls? Then one of the security guards tell us that he left. Oh well 🙁 I’ve gotten him before, but I was really hoping to get the MSU picture done. As we leave, there are still about 20 of the girls still waiting. I really don’t think they get it. The guards usually don’t lie. Even the host had left. Well, while they wait, I got places to be. 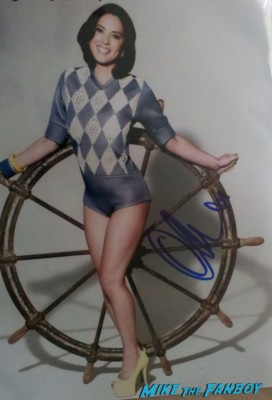