Everything old is new again! 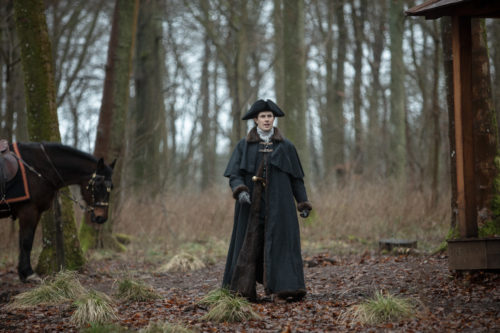 It’s nice to see Lord John again and, surprise, Willie is with him.  Only now he’s Master William and oh so mature. Such an awkward moment when they meet since no one has a clue how to explain how Lord John knows Jamie (aka his former prisoner or the stable worker from Willie’s – sorry William’s – childhood), Claire (the lady who duped Lord John into confessing troop movements by pretending to be a hostage) or Murtagh (another former prisoner who got shipped off to the colonies).  But they handle it as well as they can.

We’re definitely seeing how the Murtagh/Jamie reunion is starting to shape up.  Murtagh is none too happy with Jamie being friends with John Grey (I mean the man was the head of the prison they were in and sent him off to indentured servitude), and he doesn’t really keep his feeling about Grey’s pal, the governor, a secret.  *Hint – they’re not very positive.*  Now, he learns that Jamie has a secret son he didn’t know anything about and that son is being raised by this particular man. Yeah, that’s not going to be a fun conversation. This reunion is getting a bit strained.  Eeep!

In the books, Grey has already come to Fraser’s Ridge and is sick with the measles when the whole situation with Mueller and the Cherokee happens, so he’s there with Claire when Mueller shows up. We like that they pulled that story out to be its own episode. There’s so much to dig into with this reunion that trying to capture all the emotion of Jamie seeing his son for the first time in years, and Grey’s and Claire’s soul-baring chats, well…to have kept the book timeline where the Mueller/Cherokee events were happening at the same time would have been too much. 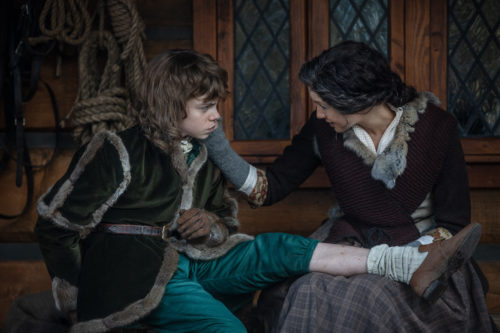 Oliver Finnegan does a fantastic job playing Young William.  Even in those moments where he’s a bit of a spoiled brat, he still breaks your heart.  His eyes never lose the vulnerability and wariness at the world.  This young man recently lost his mother, his father could be dying, and now he’s reunited and forced to spend time with a man he thought had callously abandoned him in his childhood.  That’s a lot for a young actor to get across and Finnegan does so beautifully. Sam Hueghan also does a wonderful job.  You can feel the coiled tension that’s just on the surface, he wants so badly to connect with his son, but he has to be careful not to give the secret away. You can feel the longing just radiating off of him. Ack, this poor man.  Two children and he can’t be a father to either of them. Gack!

The scenes with these two just grab you in the feelz and don’t let go. It’s so liberatingly heartbreaking when Jamie tells the Cherokee he’s William’s father to save the lad when the Cherokee demand a blood payment since William hunted on their land, because we all know it’s true, but William just thinks Jamie is lying to protect him. Still, William cares for this man he loved in his childhood and bravely confesses that it’s a lie (though we know it’s not) and is ready to pay the price so Jamie does not have to. Then he hugs Jamie, not like a boy relieved they survived, but as naturally as a son would hug a father after a harrowing experience. 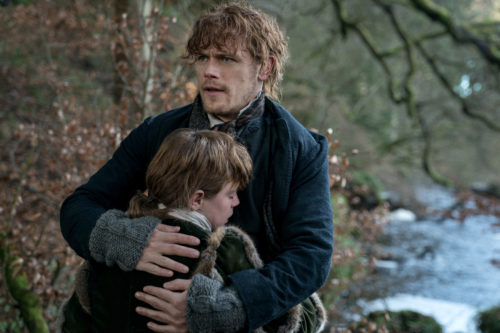 And the look back…the look back…AAAAAAAHHHHHHHH!!!!!!  Let’s just take a moment to recap the importance of this. Earlier in the episode, Jamie tells William he didn’t turn around all those years ago because he didn’t want to give the lad false hope that they’d see each other again.  As William leaves Fraser’s Ridge, he turns around and glances back at Jamie.  Giving Jamie a clear signal that there is hope they will see each other again.  Our hearts can’t take it.

Meanwhile, back at the homestead, Claire is trying to keep Grey alive since he’s come down with the Measles. We’ve been waiting to get a scene from the books where Grey and Claire are alone together. There’s a wary respect, but also this underlying jealousy between the two we’ve been hoping to see played out. Happily, Caitriona Balfe and David Berry play really well off each other. Claire’s bedside manner isn’t quite as it should be with Grey, she’s a wee bit hard on Grey at first (not that he doesn’t get some good verbal jabs in there as well), but you can understand where she’s coming from. Mama bear has been awakened and they do not pull punches, but the man can give the best puppy dog eyes, so she has to relent a little right? Their sickbed chats and confessions are almost a sort of purging and we hope cleansing. They finally have the opportunity to get everything out in the open. You just know that if they can get past that little tension hurdle that’s between them, aka they’re both in love with Jamie, they’d probably be very fond of each other. We hope there’s more Grey to come this season and the following seasons.

And finally, Claire and Jamie get some time alone and we find out why Murtagh had come to Fraser’s Ridge in the first place. Jamie had him meltdown a candlestick to make Claire another wedding band. And all of us who have read the books did a happy shimmy because we’ve finally gotten the wedding ring from the book! And let’s face it, we’ve all been missing some good smexy time between Claire and Jamie 😉

All in all, it was a good midseason episode.  Everything is starting to come together around Fraser’s Ridge, like its own little Sun and everything/everyone is being drawn there.  Speaking of which…where’s Breanna?!?!?!

Looks like we’ll find out with next week’s episode: “Down the Rabbit Hole”

Brianna follows in her mother’s footsteps and travels through the stones back in time to 18th century Scotland where she struggles to make her way to the Colonies to find her parents, Jamie and Claire. Meanwhile, Roger follows Brianna into the past and embarks on a harrowing sea journey.

See, Fraser’s Ridge is calling everyone to it. Just how easy is it to get to Fraser’s Ridge? Hmmm, we better start hiking again to get ready for the journey.

What did you all think?  We’d love to hear your thoughts about the season so far!