I feel like this was a calm before the storm episode, anyone else feel that way?  Especially book readers?  I can’t think about it, so… 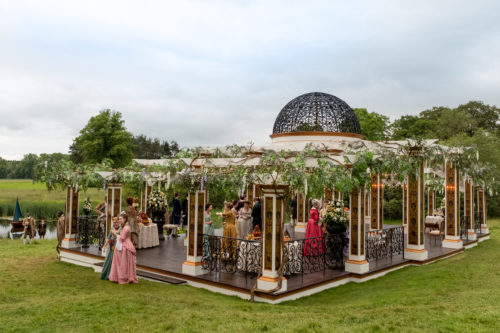 And she looks like the least interested bride ever.  You almost kind of pity Mr. Innes because he seems to truly like Jocasta and tries to be a good groom-to-be.  So it annoys me a little when she blows off Murtagh with a speech that wraps with her talking about being with a man who will do anything to make her happy vs. loving his ideals more.  I mean, yes I think Innes will treat her well and go out of his way to make her happy, but I feel she may go out of her way to make him miserable with her indifference.  I hope I’m wrong and she at least attempts civility.  Granted that will all go out the window if he’s a complete *ssh*le in which case she can treat him as terrible as she wants. 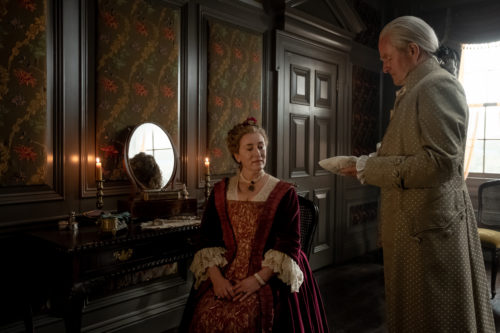 We get a glimpse of some tragedies in Jocasta’s past, so I can’t really blame her for wanting to choose comfort over burning passion.  After all, her first husband’s idealogy got their youngest daughter killed and she lost her other children in the aftermath of Culloden as well.  Also, you have to agree that Murtagh is going to choose his cause over anything else.  However, you can’t fault Murtagh for choosing his cause because he’s a man who cannot stand by while he sees injustices perpetrated by a governing body.

It’s tragic all around, but seeing as Murtagh’s story at this point is completely off-book you knew this love story was doomed.  However, it was good to get a little insight into Jocasta’s past and how it shaped the woman she is now.

My Pride for a Horse

Jamie and Claire are attending the wedding and unfortunately so is one Mr. Philip Wylie – who is completely enamored with Claire.  Yet another time where Claire gets some scheme in her head and goes forth without thinking about the consequences of her actions.  Which is Jamie coming to her rescue when Wylie tries to force himself on her.  And here we get to see why Jamie and Claire are a perfect match.  After all, Jamie can be a bit misogynistic at times (he is a man of his era for all of his forward-thinking) but Claire can be a bit too feministic for the 18th century.  Meaning that neither will take the others sh*t without giving it right back. 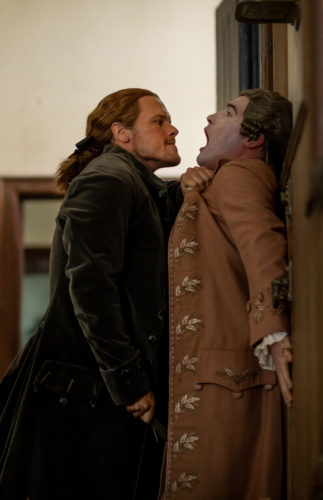 Did Claire have a good plan?  Yes.  Did she execute it well?  Debatable.  Yes, she found out Bonnet is in Wilmington and smuggling but she didn’t read the warning signs in allowing herself to be alone with Wylie.  The moment he cornered her in the foyer, she should have hightailed it out of there and discussed the scheme with Jamie, but no, she goes alone with Wylie to see his horse.

Jamie though isn’t a saint in this either.  Should he have wagered with Claire’s wedding bands?  No.  Was it right to point out that his pride was getting in the way of his logic?  Yes.  Whether that be pride that another man outwitted him, that Bonnet needed to pay for hurting one of his own, or not really caring too much about Frank’s wedding band – hard to say, but probably the lot of them and more.

In the end, however, they do come back together (in more ways than one – rawr) and Jamie manages to finagle a meeting with Bonnet by using his old smuggling alias Alexander Malcolm.  Claire asks Jamie to promise that Bonnet will not take anything else from them.

I’m going to say that I’m pretty sure it’s a promise Jamie won’t be able to keep.  Not a spoiler, just saying given Bonnet’s track record.  Oh, and that scene between Bonnet and Mr. Forbes where the latter lets Bonnet know that Jeremiah is now the heir to River Run.  (Cue horror music here).  I knew there was something fishy about Forbes being there to witness the signing of that will.

A Plague of Locusts 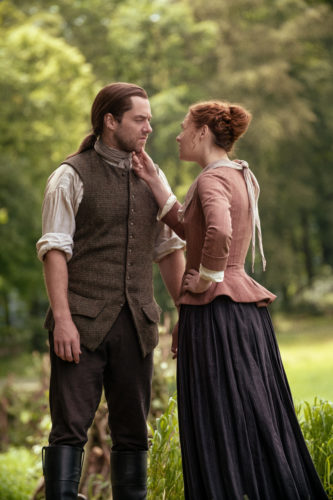 Poor Roger, thought all he’d have to worry about is a bit of handyman work and possibly tending to some farm animals while Jamie and Claire are at Jocasta’s wedding.  Instead, he faces a real threat – a locust swarm.  Finally, Professor MacKenzie gets to have his moment.  Again, we have a moment where Roger references a story from his childhood, but this one helps him to realize how to fight a swarm of locusts and keep them from destroying all the crops.  Smoke.  He goes about recruiting everyone to prepare kindling to burn and pots to set on fire in order to protect the crops by wafting a bunch of smoke over the fields.  It works perfectly and the swarm flies over with only minor casualties (some beans), and finally, the men of Fraser’s Ridge have some respect for Captain MacKenzie.

What I wonder about this scene is will Jamie really be that impressed with what Roger does or will he find a way to point out the flaw in the plan, even if it worked?  Roger’s pretty astute in that Jamie is not that fond of him.  Of course, Jamie seems like the type of father who wouldn’t like anyone his daughter falls in love with.

No Rest for the Wicked or Righteous

Governor Tryon attends Jocasta’s wedding and informs Jamie that he’s soon to be leaving for New York and a new governor will be taking over.  However, he’s worried about his legacy and as such, he’s sent word that he’ll allow clemency for the Regulators if they surrender and ask for mercy.   Which of course they don’t so now he’s fired up again to go after them and orders Jamie to gather the militia and meet him in 14 days for the battle.  Somehow you know this one is going to go down, and I fear this may be the end of Murtagh.  I hope not. 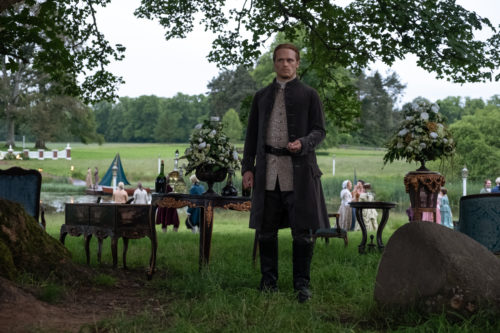 Jamie is now having to face the real possibility that he’ll have to raise arms against his godfather.  And now that Murtagh knows Jocasta will not be waiting on him to return home – he’ll be facing a Murtagh who really has nothing left to lose.

Not sure about you guys, but it’s getting pretty tempting to not watch the next few episodes because I think happy times are over – well as happy as this show gets.

What’s on deck for next week: “The Ballad of Roger Mac”

The Regulator Rebellion reaches a boiling point, forcing Jamie to face his fear and confront the consequence of his divided loyalties.

Also, who would be amongst the gaggle of ladies vying for Lord John Grey’s attention:

and let’s enjoy a behind the scenes look at how cool Caitriona Balfe makes the 18th century look. 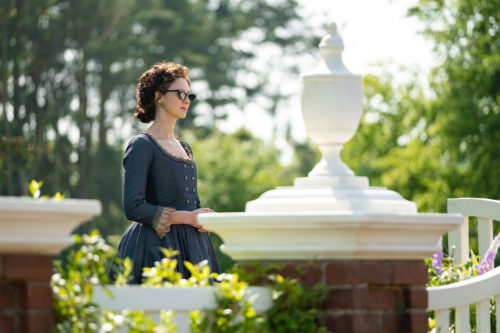 Caitriona Balfe behind the scenes courtesy of Starz