It’s Marky Mark day in hollywood! I say Marky Mark day because it’s the Hollywood premiere for Pain & Gain. Now, we all know that Marky Mark is one of the most fan friendly guys in Hollywood, but the only time I’ve ever gone to a Marky Mark Wahlberg premiere is The Fighter and that didn’t turn out too well…

I’ve actually been really wanting to see Pain & Gain, it looks like a fun action adventure film and I also really like Rebel Wilson so having her in the movie is pretty cool.

4:01 p.m. – I just arrived and Ms. Karlee just got here as well… She is bumping around and found a wonderful stool in the garbage. God bless great garbage finds. Lol… She assured me she did bleach it, which I’m so happy about. I keep flashing back to the episode of Big Bang Theory where Penny finds the red chair with a rat inside it. LOL…

4:31 p.m. – Billy Beer is also here and is boarding his photos. He’s having a great old time. LOL… It’s odd.. This day just seems like dragging

4:45 p.m. – I brought my Pain & Gain mini poster with me as well as a bunch of vintage Marky Mark Wahlberg magazines as well. Oh, and my Pitch Perfect mini poster as well.

4:56 pm. – Billy Beer thinks he’s a comedian. He put tape on the end of my soda cup and he thinks that was comedy. Comedy kids… That’s Billy Beer!

5:12 p.m. – It’s pulse pounding excitement around these parts. Pulse pounding. Billy just got an intense text. he’s very intent on his text… That or Fruit Ninja… Either way… It’s intense my friends. 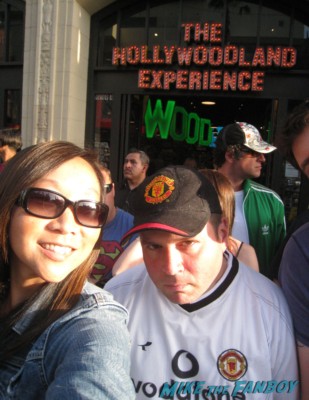 6:09 p.m. – Karalee and Billy Beer have their focus faces on. It’s time to focus. It’s Marky Mark day for God sakes, let’s get this show on the road. LOL… 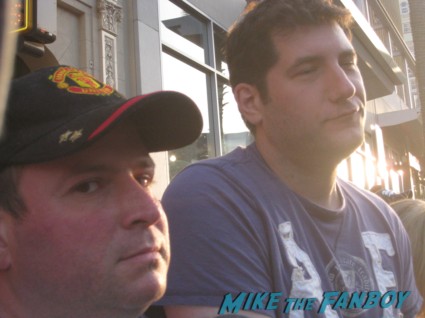 6:39 p.m. – Celebrity spot of the day… It’s the old man who was Monica and Rachel’s neighbor on Friends. Yep, this kids… It’s celebrity. It’s Hollywood! It’s what this hobby is all about. Oh yeahhhhhh…. 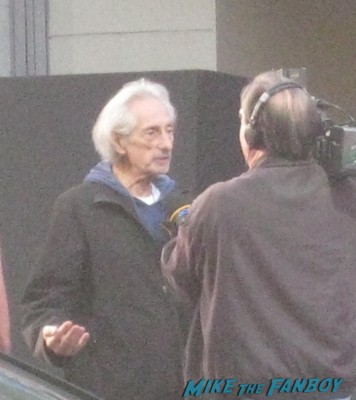 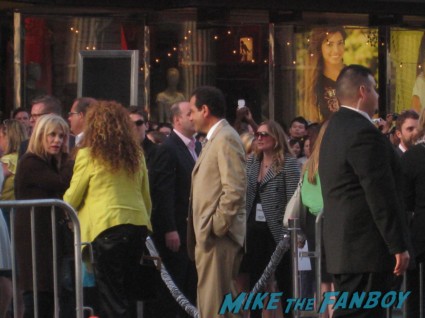 He turns around gives a half hearted wave and heads right into the carpet. 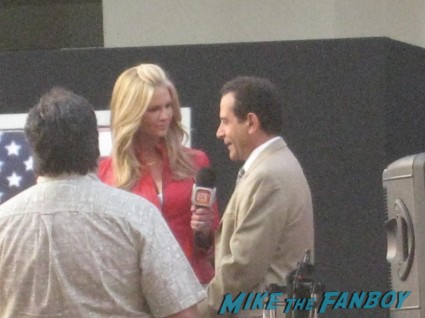 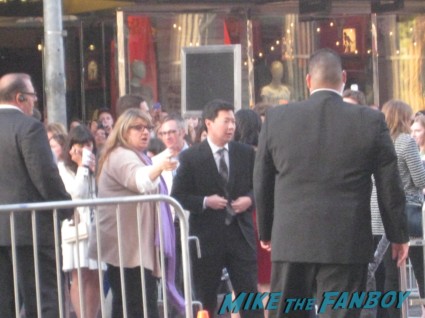 Ken signs down the line. Now, here’s an odd thing. Ken is strange. He will sign nice on items from Community but pretty much everything else gets a half hearted “m” and to me that’s bizarre. I had him sign my Pain and Gain poster and you would think being his new movie he would sign it nice… Nope. LOL… It’s just so odd… 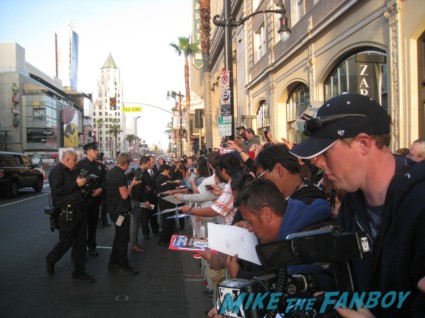 6:49 p.m. – Robb Corddry is here. People yell for him but not an intense yelling so I get why he didn’t come over. He waved and turned and went on the carpet. 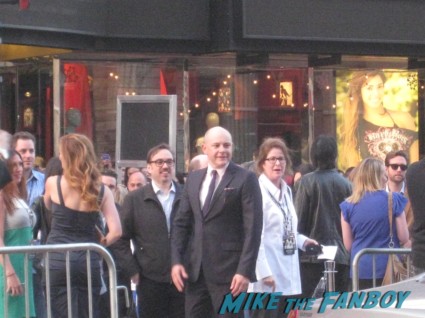 6:54 p.m. – Karalee was really excited for Ed Harris… Something about a mild crush, I dunno. LOL… Ed isn’t known for being especially kind and well… He tuns and waves and heads on in… Doh… 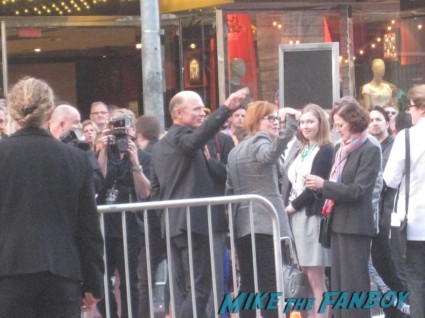 This isn’t the most fun premiere in the world! 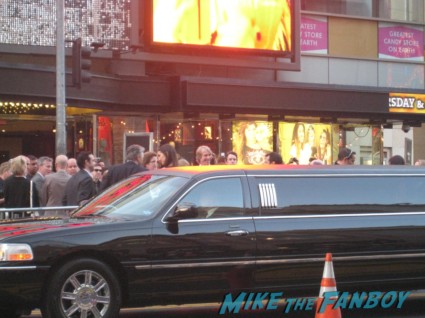 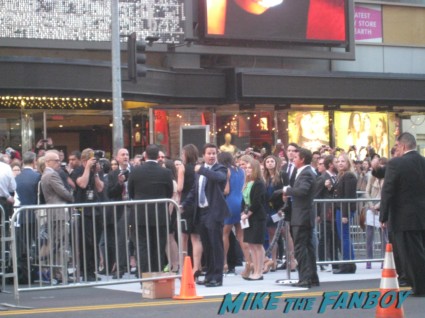 He’s looking sharp in his suit! Mark waves and then says he’s going to do press and then come over. This could be bad. Doh! 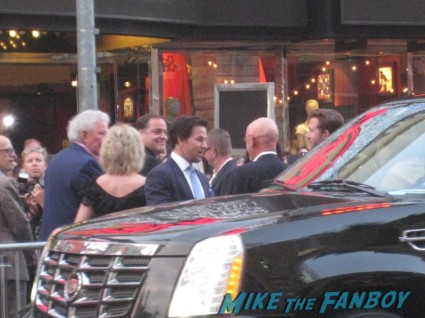 7:11 p.m. – Oh wait, there’s Mark Wahlberg! He’s coming over now. He starts at one end of the line and continues down. 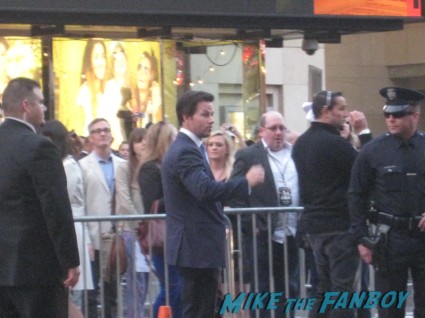 Karalee has one of my magazines and so does Billy Beer. Billy only has one thing for Marky Mark so he was nice enough to get my magazine signed as his second! 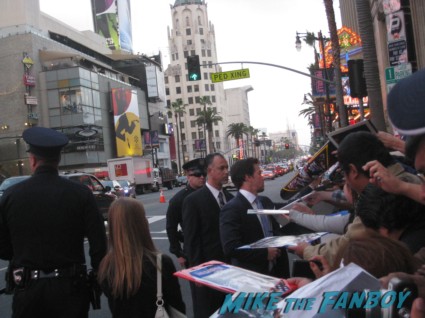 Karalee didn’t bring anything for Mark but she really wants The Rock so she was cool enough to take a magazine for me as well. 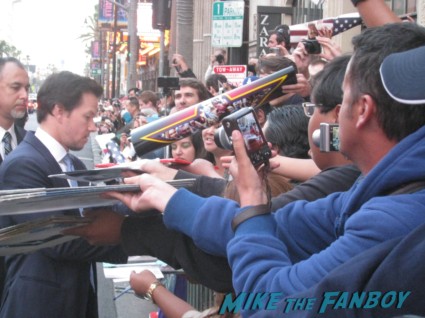 7:12 p.m. – Mark is going down the line and being really nice. Like he starts at one end and just goes down. Karalee gets a “photo” with him.. lol.. Hopefully, Karalee will share her Photo Flop with Marky Mark soon! She gets my magazine signed for me as well. Then Billy gets his photo signed and my magazine as well. Mark then says, “I don’t even have that Tattoo (pointing to the one on his chest) anymore! Mark then signs my Pain and Gain mini poster and my vintage Detours magazine as well. 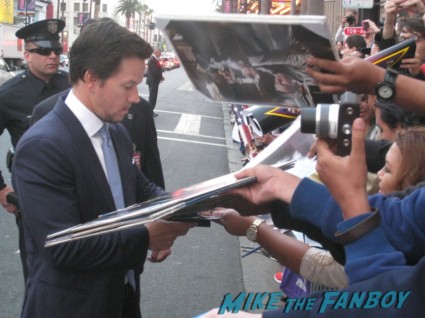 Then Mark does down the line all the way until the very end.

7:19 p.m. – Rebel Wilson arrives and comes on over. She signs but she’s so far down and is going slow. 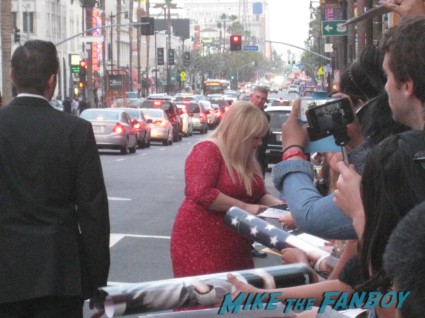 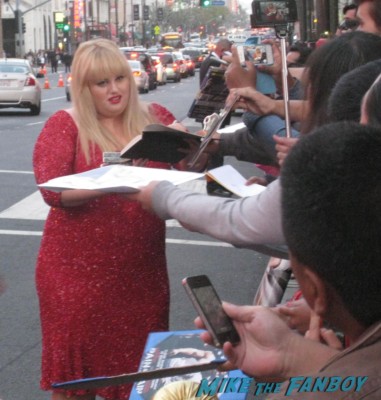 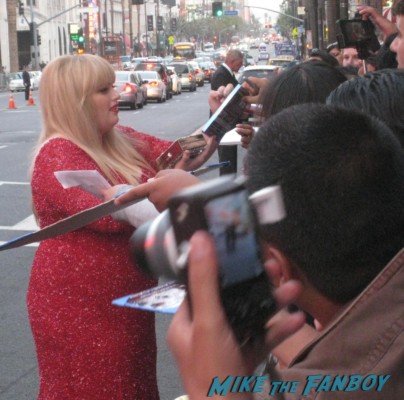 Mark Wahlberg literally spent time going all the way down Hollywood Blvd. Dude, the man is a champ!

Sadly The Rock AKA Dwayne Johnson didn’t show up for the premiere. CB mentioned he was hurt or something so maybe that why. Sigh…

So, I’m glad that Mark was so kind but the premiere as a whole was only okay.

Ah well… Anytime you can see Mark Wahlberg is a good day!