With the good news that Black Sails is renewed for season 3 (even before season 2 airs!), the cast and creators stopped by New York Comic Con (NYCC) before they headed off to South Africa to begin work on the new season!

Last year fans could stop by the Black Sails charging station at NYCC. This year, fans could stop by Eleanor’s Tavern to charge up with some grog (ie…hot apple cider) and Bear McCreary’s unique Black Sails theme in the background. Warning: ear worm! I had the theme stuck in my head for the full weekend! Not a bad thing, but a little dangerous when not everyone is up for a rousing pirate shanty! 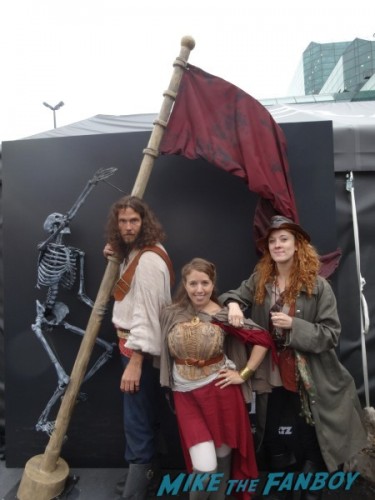 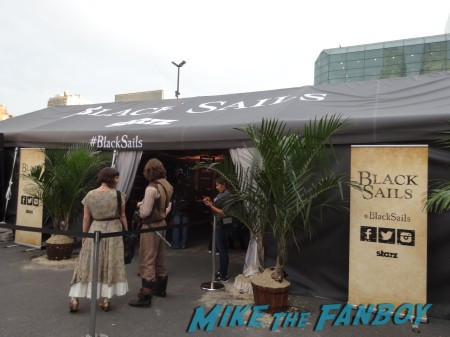 Black Sails pirates strolled around the tent while visitors where mesmerized by clips of the show. 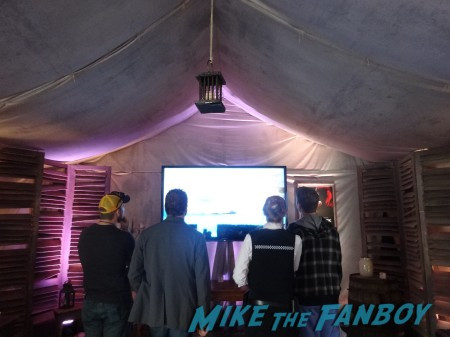 It was a fun place to hang out any time during the con for a quick breather away from the exhibit hall madness! 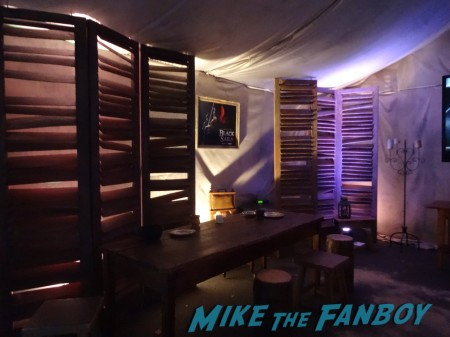 On Saturday, the creators and stars of Black Sails held a packed panel and then came to meet fans at a signing! While Black Sails has visited comic con before (both New York and San Diego), this was the first con AFTER the show had premiered so let’s say the crowd for the signing was exponentially bigger than last year!  The signing kicked off with creators Jonathan Steinberg and Robert Levine… 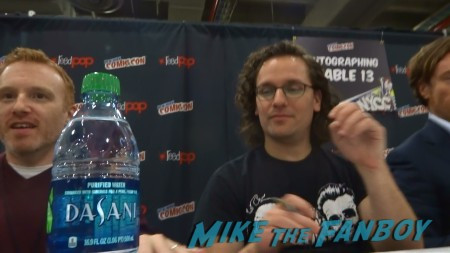 …followed by Captain Flint himself! The very charming Toby Stephens! 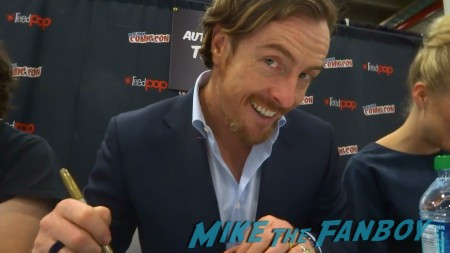 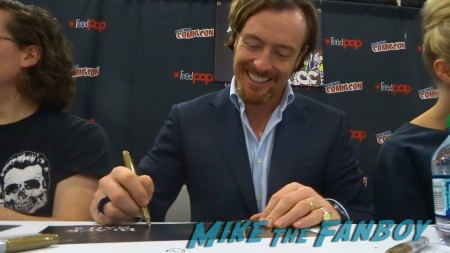 Next up, the very lovely Hannah New! (She may seem familiar to anyone who saw Maleficent this year since she was Princess Aurora’s mother, Leila.) This gracious lady plays the feisty Eleanor Guthrie. 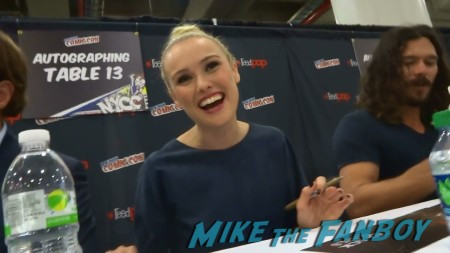 Luke Arnold (aka John Silver, the reluctant pirate and not-so-good cook) was next, complete with his luxurious pirate hair. 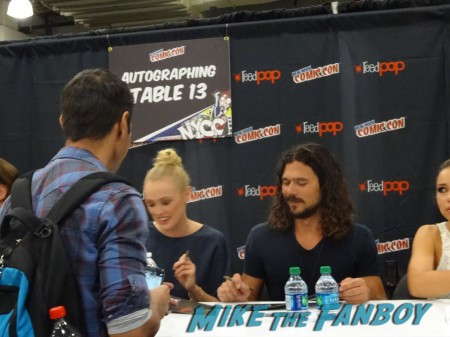 Friendly Jessica Parker Kennedy (aka the uber tough Max) always has a smile for fans. 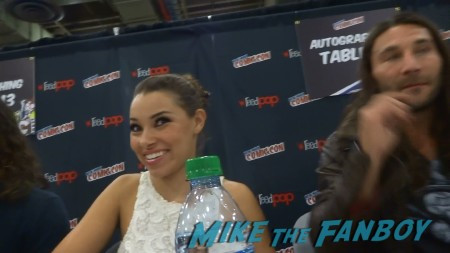 And the signing wrapped up with the rascally Zach McGowan (gruff Charles Vane) and, making his comic con debut (with a Boba Fett shirt, no less), Toby Schmitz (alias Jack Rackham)! Yes, Toby is not wearing Rackham’s mullet when they aren’t filming… 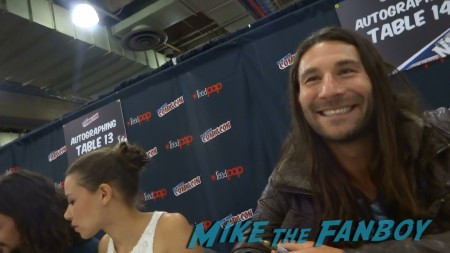 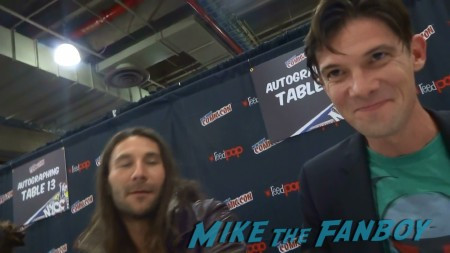 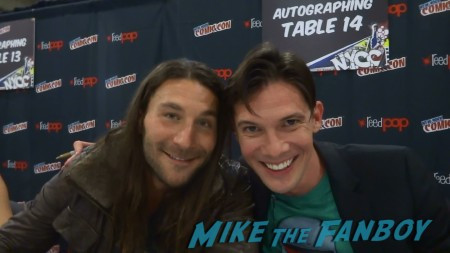 Afterwards, the cast headed out to Eleanor’s Tavern to do a quick meet and greet with a handful of fans lucky enough to draw a winning lottery ticket. Lucky me, I got a winner (!!!!) and got a quick picture with the cast. (OMG!!!) 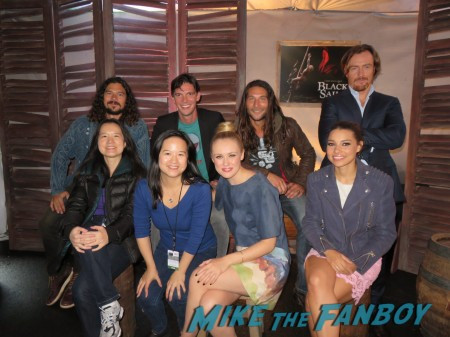 It’s so nice to get a chance to say hi to this show since it films in South Africa and they aren’t around to promote the show very often. The high production value on Black Sails really looks great on the screen, but they need a long lead time since season three filming begins next month, 15 months in advance of its debut!

Which isn’t to say the cast hasn’t keep busy in between seasons!

Toby Stephens is writing and directing a short film called In Vitro which is about the impact of infertility on marriage. You can support his Indiegogo campaign which ends soon!

Hannah New was scaling mountains for charity. Literally! And not just any mountain, but Mount Kilimanjaro! Hannah hiked Kilimanjaro to raise awareness and funds for the Intyatiyambo Community Project (ICP) which is a non-profit organization that provides pre-school education for orphans and vulnerable children. You can read more about how and why she got involved with this worthy cause and you can still donate funds to support ICP as well. (Eleanor Guthrie would be proud!!)

The most grueling & exhilarating feat but we made it! Thank you so so much for your support!♥️https://t.co/5m7PC8HmBG pic.twitter.com/njM3TYF7Iq

As always, I like to share in my good future so I’ll be giving away some pirate booty closer to the season 2 premiere. No, it won’t be the haul from the Urca (I wish!), but you’ll be well equipped for some rum! 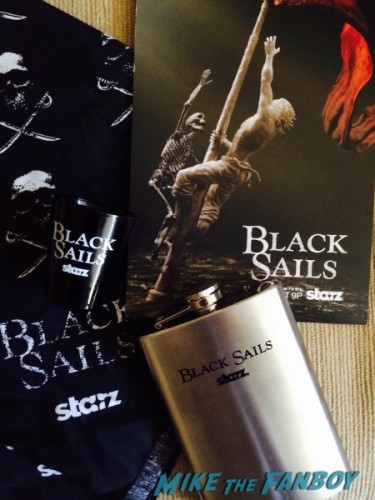 Check back tomorrow for more Black Sails fun with my interviews with the creators and cast who tease what’s ahead in season 2! 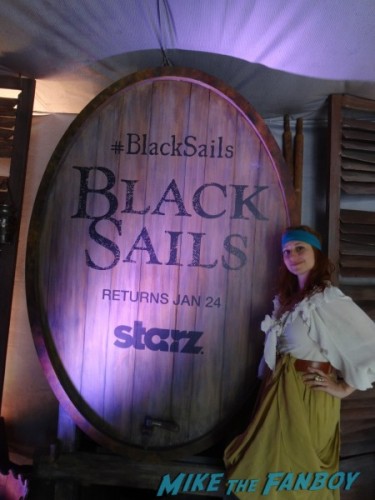