Sadly, yesterday I was unable to attend the Paley Center’s Prison Break panel last night, however Big Mike was nice enough to head down in my place. I’m really bummed I missed it because I am very excited that the show is coming back on the air! The two main stars of the show were there Wentworth Miller and Dominic Purcell along with some new and old cast members.

How goes it? Big Mike here filling in for Fanboy at the Prison Break Q & A. Yes, it’s back and I was lucky enough to be at the Paley Center in expensive ol’ Beverly Hills for the latest lowdown on a show I had never watched before. I was lucky to join Billy Beer and it was good to catch up. This show was one of those that was on my list back when it first came on the air back in ’05, but the ex and I never got around to it. It looked really good and I’m sure I’ll get around to it some day.

This season there is a nine episode arc that brings back a nice portion of the original crew along with some newbies. We were treated to the first episode of the new season that will air aboot a week from when I’m writing this hot and sexy tell-all. The new adventure will take place at a prison in Yemen, which is every prisoner’s dream, especially if you’re American. Hopefully the White House will let these air in the US. 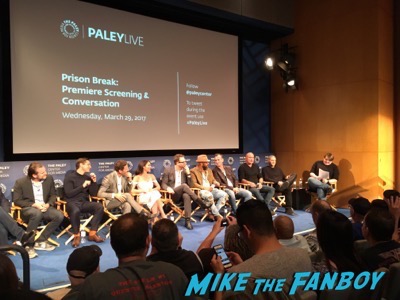 Fans of the first go-round will notice the dynamic changing drastically as now Lincoln will be on the outside trying to get his back-from-the-dead little brother, Michael. (No, he’s not a zombie.) Whuuuut? Yep, Michael Scofield is alive and, I guess well, judging that he’s in a horrific place. It’s all in the previews, so there aren’t any spoilers there. The creator, Paul Scheuring, did share that Michael and Sarah might see love again, as well as Lincoln maybe getting some action with new character Sheba, played by the smokin’ hot Inbar Lavi. 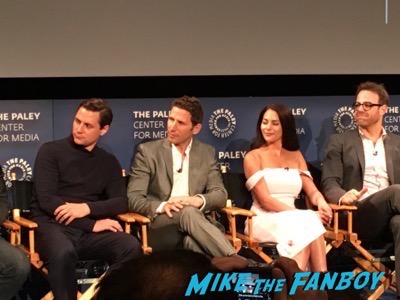 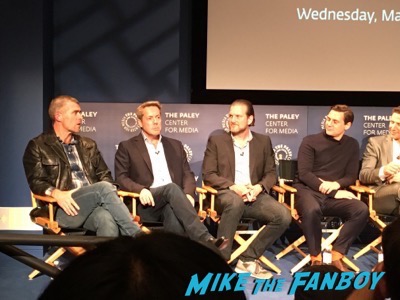 I enjoyed the episode very much. I really feel it’s harder and harder to make a good network show these days with the cable channels beating the shit out of the network shows quality-wise, but this is one I’d like to tune in for and recommend y’all do the same.

On the panel we were joined by the show’s creator, a couple of exec producers who did not say much, if anything at all, Augustus Prew, who looks like Tom Holland, the new Spider-Man if he were on growth hormones. He plays Whip, Michael’s new cellmate. The aforementioned Inbar Lavi, Mark Feuerstein (Jacob Ness), Paul Adelstein (Paul Kellerman), Rockmond Dunbar (C-Note), Robert Knepper (T-Bag), Dominic Purcell (Lincoln Burrows), and Wentworth Miller (Michael Scofield). 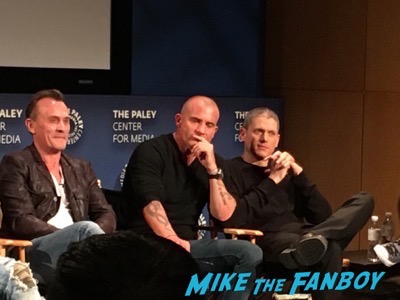 This cast seemed close and tight, which is always a good sign in my book. Wentworth and Dominic seemed like they took the same course in Intense Brooding 101. They were personable and displayed some emotions, but it wasn’t something you would push if you didn’t know them. Sarah Wayne Callies was a late scratch and that was a bummer because I had my Walking Dead poster that I needed her on. All were thankful to be on the show and at the Paley Center, and the cast was especially happy Dominic Purcell was there after a set collapsed on his head in Morocco while filming. His scalp had been exposed and he needed 250 stitches on his intense noggin. The doctor said if he didn’t have an NFL sized muscular neck he’d have most likely been a paraplegic. Thank the lucky stars he was okay. He wanted to get back to set within a couple of days and that did not surprise me to hear. The dude sounds INTENSE. If he’s the father of a teenage daughter I would recommend to whomever is dating her to get her ass home at least an hour and a half early. 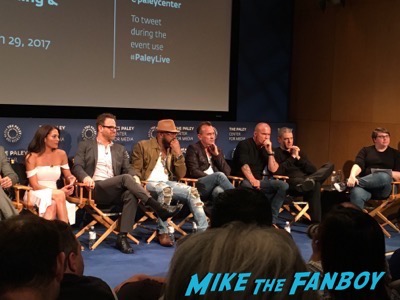 There was a mild scramble to the stage once the audience questions were finished. Dominic maybe took two or three selfies before making his way across the stage to right in front of me where he looked right past us all and called his party down to the stage and disappeared backstage. He wasn’t being an asshole or anything, but he was having none of it from us and that is okay. Most of the cast was making their way towards my side of the line, except for Wentworth Miller who was stationary on his side of the stage taking selfies and signing away. With the exception of maybe one cast member and the two silent execs, I got everybody on the two posters our beloved Fanboy supplied me with. Wentworth stayed until everyone in the room got their selfie or signature and he couldn’t have been cooler. 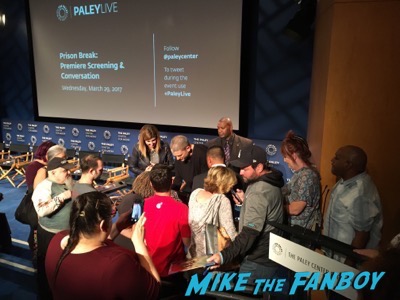 He and the creator even liked the first poster that I gave them to sign since they hadn’t seen that one yet. Fanboy is always on the cutting edge of the best shit to get signed and no shortage of it. Anyhoo, the night was a success and I feel the show is definitely worth watching this season, so give it a look. Until next time, stay outta my way and good luck out there. 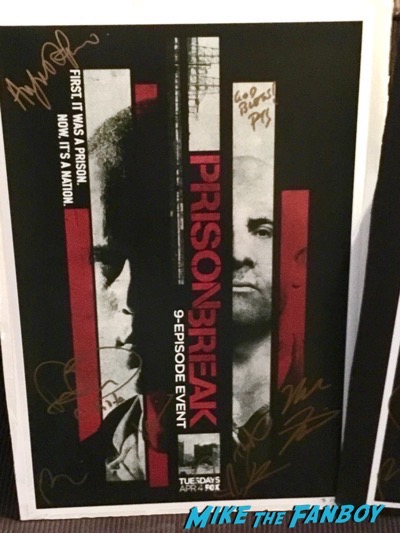 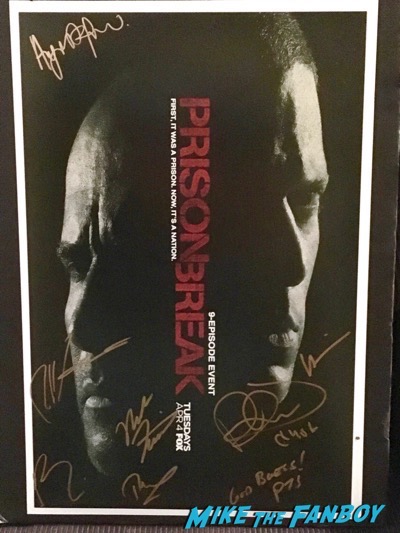