Home / Fanboying! / Batman Pat Gets Kissed By A Rose After Meeting Seal! Autographs! Chasing Cars! Braving The Cold! All For The Love Of Batman!

Can I tell you what an awesome dude Batman Pat is? He rocks! And he’s just sent in this awesome recap for us, where he met Seal. Now, if you can’t tell by his name, Batman Pat is a huge Batman fan. I mean HUGE Batman fan, it’s his name for God sakes!

So, if there’s a Batman event, Pat is sure to be there. So, Seal was doing a rare talk show appearance and here in LA it’s cold as the arctic. But still Pat had to try right?

Thought you might enjoy this little success I had tonight…

So I heard Seal would be at Jimmy Kimmel and figured it would be a good opportunity to try and get a “Batman Forever” piece signed by him. I wasn’t wild about the “Kiss From A Rose” single artwork, although it does have the Bat-Signal on it… so I photoshopped a custom piece, painted a small wooden frame and mounted it to it.

I got there just as he was finishing up his outdoor performance. All the graphers had already left the usual area… I figured if anything he would leave out the far back entrance behind the stage, so I positioned myself by the driveway and tried to think warm thoughts in the cold air. I was the only person waiting which was unusual, and not a great sign. But you never know! There was definitely some kind of after party going on in the parking area and a couple of black town cars and SUVs idling. Hmm.

After about 30 minutes, each colder than the last, I was considering giving it a miss. I’ll go to great lengths for Batman autographs, but catching a cold is a little much for me. Nine minutes after I had told myself “Ten more minutes”, an unassuming little sport utility pulled out. The driver had a familiar profile… Damn!

He pulled out pretty slowly and made his way towards Highland. What the hell? Maybe I could catch him at the the stop sign. Normally I don’t chase anyone, especially in a car, but he did seem to be going awfully slow. Then something amazing happened. I had already crossed the street and was making my way up the sidewalk when he pulled over! What was going on here?

I walked past his parked car and then turned around to see if it was actually him. He had his head down, looking at his phone. He noticed me and I held up my piece and mouthed “could you sign this?’ He made some sort of head gesture I couldn’t immediately identify and went back to his phone. He didn’t seem perturbed or anything so I waited. After a few seconds he looked up again smiled and gestured me over. I went to the driver’s side and he rolled down the window. I thanked him profusely and gave him my piece. He seemed to really dig it and told me it was cool. I said thanks, I had made it for him especially to sign. 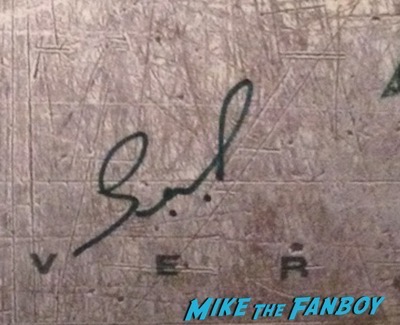 He took his time signing, asked me where and what I wanted him to write. I told him how much I enjoyed his work and he said “Thank you brother!” Very humble, very cool guy. And not only that- I don’t know whether it was his car air freshener or the man himself- he smelled fantastic! Like a really expensive candle shop mixed with a super fancy bakery. Absolutely heavenly.

All in all, a tremendous (and fortuitous!) encounter. Seal Forever! 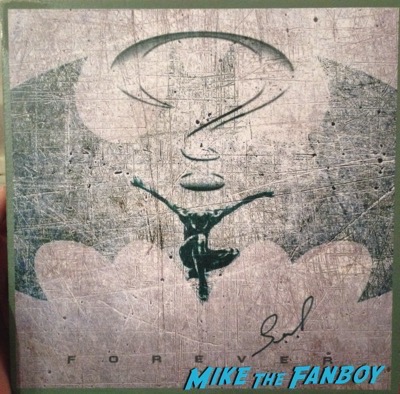