Man, I’m starting to have such a bad feeling about the Star Trek Into Darkness Los Angeles premiere. Sigh..

I don’t want to put it out there, but man… For this weeks Jekyll Or Hyde, I’m turning my attention to one of my favorites. A British actor, a man who I think is so frickin funny… None other than Simon Pegg. Yep, Scotty.

I’ve met Simon Pegg two other times and both times, he was as nice as he could be. Just like you would want and/or expect him to be.

One time was for a DVD Signing for Spaced where he signed other stuff, joked around, and was generally awesome. The second time was the Paul premiere where he and Nick Frost showed up early to sign for all the waiting fans. 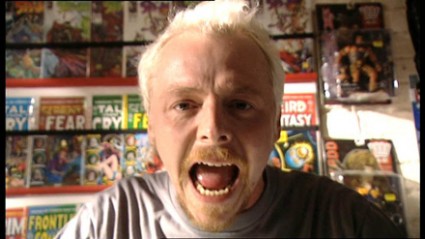 So, when I attended a recent talk show, I expected the same old Simon Pegg… Well…

First off, this is quickly becoming one of the crappiest weeks ever. Monday, you may have read about my Leonard Nimoy disaster… I have not recovered.

Star Trek fail #1 for this week.

After picking up a friend from the airport and dropping her off I headed down to get Robert Downey Jr. and Simon Pegg. Robert signed on the way into the show and so I missed him. Grumble.

But that’s okay, I really wanted Simon Pegg. He’s not in the states very often and I’m a huge fan. Yes, I brought m Shaun of the Dead promo cricket bat (or Lacrosse depending on who you asked) and yes, the rest of the MTF Family had to deal with me being in a pissy mood. Sorry guys. 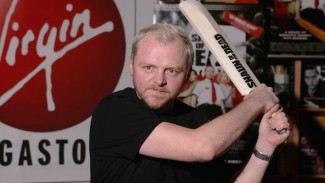 That’s okay, because I know what a great guy Simon Pegg is right? Well… Today, we got the big diss… In fact about 40 people got the big diss. Man, that really sucked. Now, It was even hard to see Simon. He gave someone a hug and then took off. What?

One guy said, Simon mentioned something about getting to another taping but I didn’t hear anything like that. This is one of the reasons I love the Jekyll Or Hyde column. Even the nice guys can diss their fans, and sometimes the jerks are nice.

Thankfully, I know that Simon is a pretty decent dude and hopefully, I can get him later on in the next couple weeks. Oh well…

On this day, Simon Pegg was definitely Mr. Hyde.

For ignoring his fans, Simon Pegg is given the Angry Theo Award!