Billy sans beard headed off to the Spirit Awards brunch in the rain. I thought it would be a bit too soggy to get anything but Billy braved the elements and got some good people!

A couple Academy Award nominees came over, Jessica Chastain and more! Not too shabby for a water logged day right?

Welcome back to Billy Beer’s Bar Stool. Today we are off to get our first glimpse of some of the actors and actresses nominated for Spirit Awards along with some the first time directors. The confirmed list was pretty good, but you never really know who going to show up to these things anyway. So away we go!

So as I’m driving closer and closer to LA, I’m noticing the weather is getting worse and worse. This is not a good sign. I guess there’s a chance of rain all day long. Probably should have checked the weather channel. After getting there a little bit before it started, mother nature finally start to laugh in our faces and serenade us with droplets of rain. Luckily I brought an umbrella, cause this could have been much worse.

Now since it started raining, getting them coming out their cars might be a struggle. The Valet guys are not providing any umbrellas for the guests, so they just run up the stairs to shelter. It looks like the best approach is to stand by the door, where the escorts have umbrellas for the talent.

Emmy Rossum is the first to arrive. She is one of the hosts for the event, and by hosts I mean she was too busy to even stop and give us the time of day. Kind of weird, cause normally she is nice enough to stop and do at least a few. I think she might be getting a little burned out by the autograph seekers!

Next to finish the red carpet was Sasha Pieterse from Pretty Little Liars and Inherent Vice. There weren’t many people with pictures, but she was nice enough to sign my two, and take a few pictures. Rain did get on them, so I just prayed the signatures don’t get smeared! 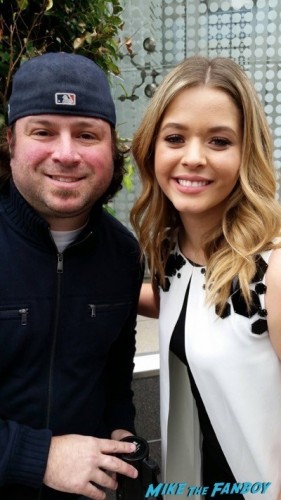 Patricia Arquette is next to come through. Things start to get a little crazy for her. I’ve been a fan of hers since she played Alabama in True Romance. She was really nice, signed one each, and took pictures, For me, a first for both. Very happy about that! 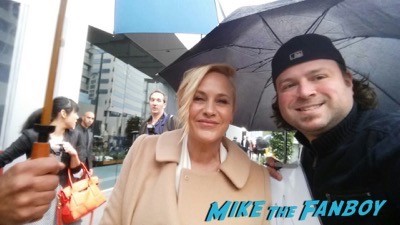 Now one of the names everyone was waiting for, Marion Cotillard. She’s not in town too much, and she has a large following having starred in the last Batman movie. She looked a little hesitant, but she came over and signed away. 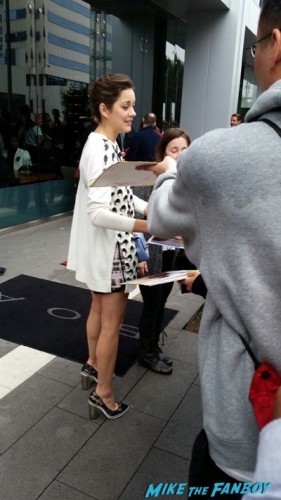 Again, keeping my photo dry with my umbrella was a challenge cause there was a lot of bumping and squeezing going on. I was able to get mine done, and then also get a picture after she was done signing. 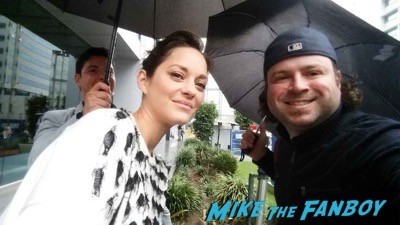 Still waiting for a couple of more names. Finally, Jessica Chastain arrives. Although I already have a fill of Jessica autographs and photo-ops, you can never have enough! She’s kind of in a hurry to go inside, but she still stops and signs at least one per person, and tells everyone she’ll do it on the way out too. 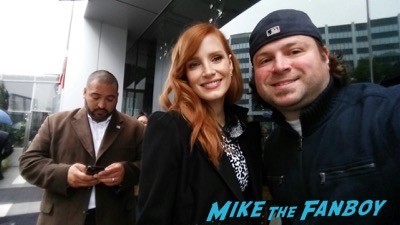 The last to arrive is Ethan Hawke. He too is in a hurry, and only had time to sign 2 quick ones. Of course the rain stopped as soon as everyone got inside. Now the waiting game begins.

Emmy is the first to leave, and again surprisingly she blows off everyone, basically hiding behind her publicist. WOW!

Next we see Michael Pena leave. I of course forgot my Fury picture, but he was nice enough to take a picture with me…..kind of! 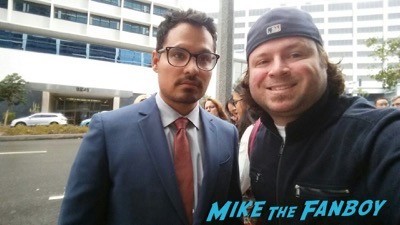 Sasha was next to leave. While she waited for her car, I was able to get a picture with her. Again, she’s super nice!

Marion soon followed. She actually signed again. I had nothing for her, so I just took pictures.

Now the rain started again, UGH! After waiting a little bit, Jessica came back out. It got a little bit crazy, she had everyone move to a certain area and she went one at a time. Again, she’s so nice, but can control a crowd too! When it’s finally my turn, I thank her and also thank her for getting Anne Hathaway for me at the Q & A. Then I told her about how she was one of the top ten on Mike the Fanboy’s top.

She seemed EXTREEMLY honored and said it ranks up there with her Oscar nominations! I told her that she was number two and that Angie and Brad were number one, which she replied that they always win. I then told her that I voted her to be number one, but Mike overruled. Which she replied well, who reads his articles anyway, all anyone cares about is Billy beer articles. (Note: two out of the three quotes I used for Jessica might be misquoted….MIGHT)

Well, While I’m talking away with Jessica, I had no idea Ethan had come out and started signing. By the time I got to him he was already crossing the street. DOH!!! Oh well, I’m sure I will see a lot of him Oscar season. Well, I’m sick of this rain, time to find a bar and stay dry. Till next time.