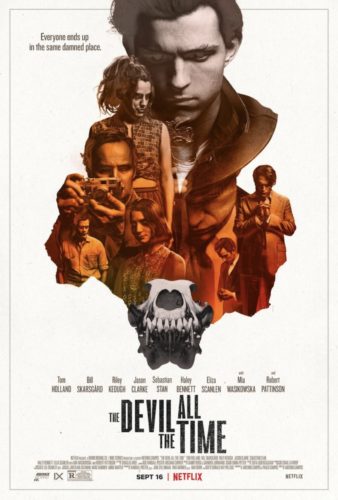 Despite a strong stellar cast, “The Devil All the Time” torments those searching for a gritty gothic tale. Nonetheless, Tom Holland and Robert Pattinson prove once again why they’re the next generation of transcendent actors in the vein of Michael Keaton and Christian Bale.

Based on the Midwestern Gothic novel by Donald Ray Pollock, “The Devil All the Time” follows an assortment of interesting characters in Southern Ohio and West Virginia post-World War II, including two serial killers. Marine Willard Russell (Bill Skarsgård) travels back to the US after serving in the Solomon Islands and begins a relationship with a waitress Charlotte Russell (Haley Bennett) after arriving in Ohio. Together they have a child, Arvin (Tom Holland plays the older version) and the movie follows the family as sinister characters cross their paths, including Reverend Preston Teagardin (Robert Pattinson). 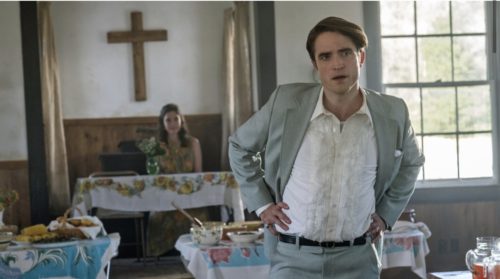 “The Devil All the Time” persists as an excellent reminder Tom Holland and Robert Pattinson are more than just your friendly neighborhood Spider-Man and Caped Crusader respectively. Like most individuals, the most obvious reason to check out this film is for both Holland and Pattinson. Unlike most of their contemporary superheroes who just portray biopics or franchise films, both young thespians continue to expand and impress with their amazing acting choices. Holland’s harrowing performance lights up the screen and impressively portrays a damaged, distraught young man phenomenally without revealing the true extent of his phycological issues. If Holland keeps this up, it’s a matter of time before Holland becomes a regularly player and name tossed around during awards season.

For the longest time I mocked Robert Pattinson until he worked with David Cronenberg with “Cosmopolis.” Since then I’ve been a huge advocate for Pattinson, especially for “The Lighthouse,” which was grossly overlooked last awards season. Reverend Preston Teagardin’s phenomenal presence should be in the same conversation as Robert Mitchum (“The Night of The Hunter”), Julian Beck (“Poltergeist II”), and Jason Miller (“The Exorcist”) with the same bravado as Philip Seymour Hoffman (“Doubt”) and Ethan Hawke (“First Reformed”). Not only does he make an immediate impact pulling you into the story, but remains one of the most spectacular supporting characters in the entire movie. Easily, Robert Pattinson’s preacher character is the most memorable aspect of the entire film. Considering, Bill Skarsgård, Riley Keough, Jason Clarke, Sebastian Stan, Haley Bennett, Harry Melling, Eliza Scanlen, Pokey LaFarge and Mia Wasikowska round out the cast, Robert Pattinson pitch perfect performance is what acting is all about and the definition of a scene-stealing supporting role. 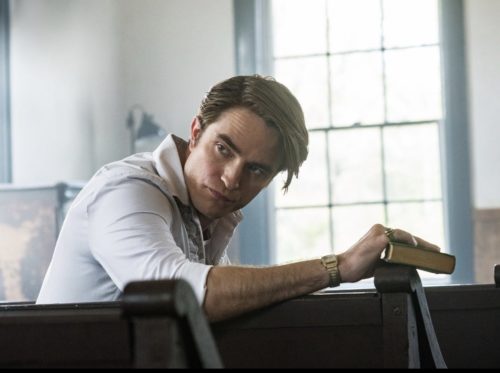 Antonio Campos’ suspenseful style certainly creates a wonderfully-woven tale on paper, but breaks apart rapidly despite a plethora of cinematic crime and violence throughout. This pointless period piece lacks substance altogether and is a haphazardly, horrible hilbilly movie riddled with countless cliches. Gothic thrillers should possess more variety about the backwoods and shock value to sustain viewers beyond a glossy, prepackaged stellar star-filled cast. Visually it reminds me of “The Paperboy” and “The Beguiled” with the same shock value of “Stoker” and “Lawless.” This tangled, tedious tale relies too heavily on the cast and not enough focus on script development. Bluntly, it’s a mismanaged movie with two terrific performances by two Hollywood Heartthrobs with a stunning supporting cast and pervasive photography, but its dreadful, drawling narrative torments those hoping for some sophisticated storytelling.

“The Devil All the Time” mismanaged marvelous opportunities despite captivating casting, especially in Pattinson and Holland in this gothic soap opera. The boring, bleak pacing relentlessly tends to be shrewdly shallow and unrelenting with trying too hard. Campos’ ambitious ambience and sprawling atmosphere certainly corrupted what could’ve been an amazing movie. Instead, its mixed results at best. Maybe down the line I will watch again, but unless you want to see two stellar performances from Holland and Pattinson you will want to avoid this gimmicky genre film.