Sometimes… You just never know what to expect. The same night I was shocked at how nice Cate Blanchett was… JM was inside the screening and got a fanboy fail. Doh! He was really excited about meeting Rooney Mara and sadly, she slipped out. Cate Blanchett did give him a nice rebuff…

Last week I finally saw one of the most critically acclaimed films of 2015, “Carol, “which stars Academy Award winner Cate Blanchett and Rooney Mara. As an added bonus, both stars along with director Todd Haynes and writer Phyllis Nagy were in attendance for a Q&A after the film.

Now normally I usually have high hopes for awards screenings as sometimes the talent gets burned out, doesn’t possess the best reputations for autographs or is running from one event to the other. In this case, it was a combination of all three. Besides being able to finally check out “Carol,” I’ve eagerly waited an opportunity to meet Rooney Mara ,one of my favorite Hollywood starlets (After all she is in one of my all time favorite films “The Social Network).

Recent reviews for encounters had not necessarily held the best track record for either actress at earlier events. However, Rooney usually maintains a pretty good track record for interacting with fans so if anything I thought my best chance may be for Rooney and possibly Todd Haynes.

On the night of the event, my buddy is running late (and of course the RSVP is under his name). They slowly start letting people into the screening nearly 90 minutes early due to the (possibility of) rain weather. About 30 minutes later my buddy arrived and we grab seats in the second row. 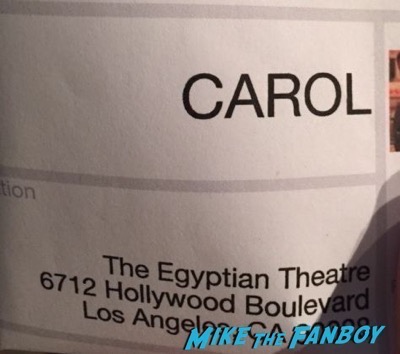 We seem to be in a good position as my buddy also wants to meet Rooney, but security seems super tense. The lead guy, who appears to have an Australian accent (maybe Western European), obsessively is yelling at the team about preparations. A little too intense if you ask me, but we think nothing of it at the time.

“Carol” comes on and is amazing. The accolades and adoration for the film are spot on with this powerful picture portraying a blossoming relationship between two strong characters set in the 1950s. One of the writers for Variety conducts the Q&A introducing Phyllis Nagy, Todd Haynes, Rooney Mara and Cate Blanchett in order. Overall, the playfulness of the Q&A was fantastic and I have to say my admiration for Cate went way up. 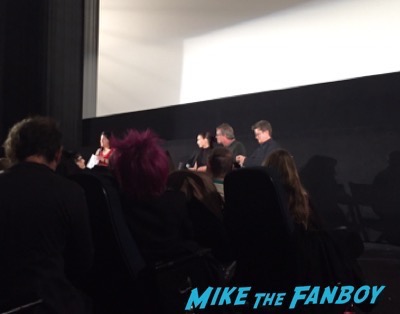 Yes, Mike I only appreciated her somewhat beforehand, but can now understand her charisma after seeing Cate in person. Her sense of humor and banter throughout the Q&A was thoroughly enjoyable. 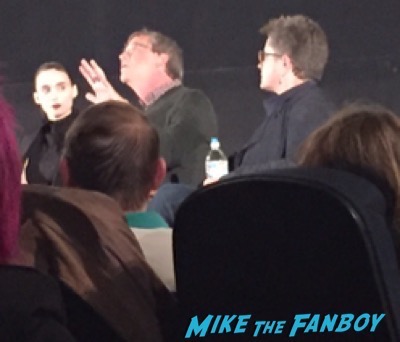 Soon afterwards people were very patient and didn’t lunge at the talent like some Q&A’s once it ended. 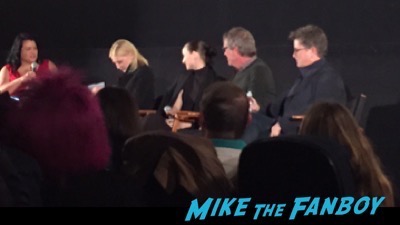 However, it seems like everyone only wanted Cate as suddenly people pulled out magazines, DVDs, and photos from out of nowhere it seems once they finished taking group pictures for the theater photographer. Security seized up and quite literally put up a human barricade forbidding anyone from interacting or even attempting to ask anyone for an autograph.

It’s during this time I notice Rooney Mara slips out unnoticed as everyone only had stuff for her co-star- I slowly sank back in my seat and debated about if I could maybe catch her outside. Suddenly I divert my attention back to Cate, who is hanging out and hugging Todd Haynes with most admirers waiting patiently for their opportunity. A few faint, “Cate could you sign?” were uttered but security literally got in people’s faces.

The main security guy yelled and screamed at one guy for even attempting. He muttered something to the affect, “I told you SHE IS NOT SIGNING. SO STOP ASKING!” He continued saying different variations of that throughout the time Cate remained in the theater. From my view it appears a few people were able to ask Cate questions, but anyone who attempted an autograph/picture request were turned down immediately by theater staff and security.

I tried switching sides and managed to get a spot, which Cate would have to walk by when she exited. As Cate leaves an opening occurs, she makes eye contact with me as I attempted to get a “Blue Jasmine” DVD signed and I asked a polite, “Could you please sign an autograph for me. It would mean a lot.” Cate genuinely looks me in the eyes and sincerely apologizes, “I’m so sorry. I can’t” and then motions about security forcing her to leave with her eyes.

Although somewhat of a diss, “one on one,” it was a subtle nod about security being on a power trip. She recognized I wasn’t forcing the issue and I respect the polite decline. I then turn to my right and see Todd Haynes is swarmed signing autographs. People are being pretty aggressive and NOW I see why security got Cate out. Luckily I managed to get Todd to sign an autograph and that was that.

Later on that night I found out both Rooney and Cate signed outside, which was devastating to hear, but sometimes that’s the luck of the draw.