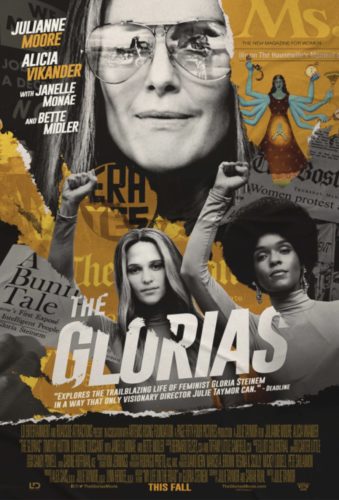 Based on Gloria Steinem’s book “My Life on the Road,” the film focuses on Steinem’s surprising, stellar and revolutionary rise to becoming one of the leading forces within the women’s movement. Portrayed by four performers (Julianne Moore, Alicia Vikander, Lulu Wilson, Ryan Keira Armstrong), Gloria Steinem’s incredible, influential life story is interwoven with a creative, complex journey showing her role in the women’s right movement from the 1960s and beyond. Along with other fantastic females, Dorothy Pitman Hughes (Janelle Monáe), Flo Kennedy (Lorraine Toussaint), Bella Abzug (Bette Midler), Dolores Huerta (Monica Sanchez) and Wilma Mankiller (Kimberly Guerrero), the women’s movement had many magnificent contributors and Gloria was one of many. 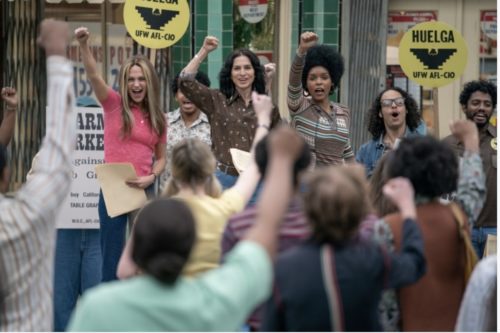 Alicia Vikander lights up the screen as the young Gloria Steinem (ages 20-40) and provides one of her strongest roles to date. I’ve been a huge fan of Vikander since “A Royal Affair” and her amazing awareness with every role reels you in with authentic, ambitious characters. Although alternating primarily with Julianne Moore’s Gloria, Vikander’s vulnerability permeates every moment she’s on the screen pulling the viewer into the story more. The double casting of two Academy Award winners was a nice touch. Alicia Vikander and Julianne Moore magnificently portray an icon with two of the strongest performances this year, especially if either is poised as “supporting performers” for awards consideration. Without a doubt, Vikander gives an award worthy performance and so far is a leading contender for Best Actress/Supporting Actress (Think Kate Winslet in “The Reader” and Olivia Colman & Emma Stone in “The Favourite”).

Director Julie Taymor’s gorgeous looking film feels fresh, but somehow persists as a hollow biopic with its multi-plane universe of multiple Glorias interacting and existing with one another, especially Julianne Moore and Alicia Vikander. This glossy bio movie manages to downplay the struggles and obstacles Steinem endured with every “bump in the road” being an inconvenient issue she somehow sidesteps effortlessly. Lacking heart, the film feels familiar in the vein of “On The Basis of Sex” and “Battle of the Sexes.” Sadly, it’s a dismal depiction of a larger than life character. Truthfully, it’s probably closer to “Diana” and “Nina” with wonderful talent trumped by bothersome concepts without completely connecting the audience. A prime example persists with the black & white framing device of “godly” Glorias commenting on certain situations and reflecting on past experiences while riding a bus to/from events with whatever “present day” Gloria is supposed to be telling her story. 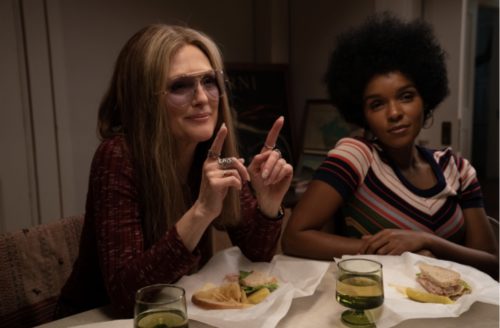 Overall, the film is a bland biopic with very few standout moments and at least 30 minutes too long. However, the performances of Vikander and Moore make it a must-see. Due to the current climate, Timothy Hutton’s high-energy portrayal as Steinem’s dad will sadly get overlooked despite being a standout role. Steinem’s staggering impact feels watered down with Taymor’s script and directing. There are the occasional moments of excitement, but beyond nostalgia it lacks anything substantial. Had “The Glorias” taken a “Selma” approach about focusing on a singular subject or memorable moment, vviewers are instead left with a disjointed, dumbed down messy movie.