Home / Stars of the 1980's and 1990's / The Hollywood Gal Talks About Being In Pee Wee’s Big Adventure! Sharing The Screen With Paul Reubens! Cassandra Peterson and Lunching With Phil Hartman! Mmmm Motorcycle Mama!

It’s been a long long time since we’ve heard from The Hollywood Gal but this time she is sharing an awesome story. Our own Hollywood Gal was in Pee Wee’s Big Adventure as one of the Motorcycle Mamas! I guess being friends with Phil Hartman and Cassandra Peterson sort of helps. LOL…

The Gal shares all her stories of being on the set and what it was like after the jump!

I was in The Groundlings with Paul Reubens, and was there the night he did Pee Wee for the first time in front of an audience. I loved him instantly. It was wonderful to watch as Paul took Pee Wee from the Groundling stage, to an Equity theater, and then on to the big and little screen.

Phil Hartman, also a fellow Groundling, was the co-writer, of “Pee Wee’s Big Adventure”. I was chatting with Phil over lunch one day, about the biz, stuff we liked, and parts we’d like to play, and I mentioned I always wanted to play a waitress in a truck stop. He said there was a waitress in a truck stop in the Pee Wee movie! He said he could get me in on it, but the final decision was not up to him, or Paul. I understood, and was delighted to audition. He told me to think of the Bette Davis character, in “The Petrified Forest”, with Bogie. 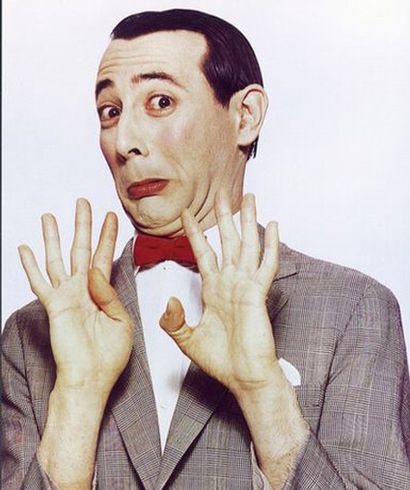 I thought the audition went well, and Phil told me everyone really liked me, but another actress was cast.

Weeks later, I was at a friend’s house, and her friend Harvey was there, and he had just gotten the job as the assistant director on the Pee Wee movie. I told him that I had auditioned, and he said, “Well, I’m going to need a couple of biker chicks, as background, would you want to do that?” 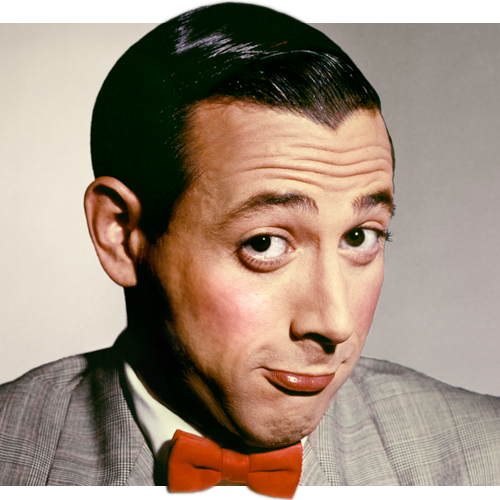 It was a 7:30am call at a bar on Sierra Highway, out in Canyon Country. A cold and foggy morning. I had gotten lost, and had to flag down a trucker in my tough girl garb to ask for directions. (Yer eyes can play tricks on ya when yer haulin’ a load all night, to meet an early morning deadline)

I pulled up to the little dive in the desert, and got out of the car. There it was, the bar that time forgot. It had a hitching post out front, and about 20 motorcycles all in a row. Harvey and Paul, as Pee Wee were out front, and greeted me.

“Terry’s too glamorous to be a biker chick”, I remember Paul saying. Thanks, P, but I’m doing it anyway. Harvey told me I could relax for awhile. I went to check with wardrobe, and look for the coffee. I found my fellow “spear carriers” hanging out by the production trucks. They were all as big as doorways. Outlaws, in leather and denim, still dusty from days on the road…

“Hi Guys”, I chirped, apprehensively, as I climbed aboard the wardrobe wagon. They eyed me lasciviously through dark shades, and nodded. They looked a little scary, but exciting, and in some cases, gross. Some of the bikers were actors, some were extras, some were stuntmen, and some were the real deal,scrounged up by Central Casting. One of the bikers, the tall Mexican guy, Luis Contreras, I went to Jr. High School with! 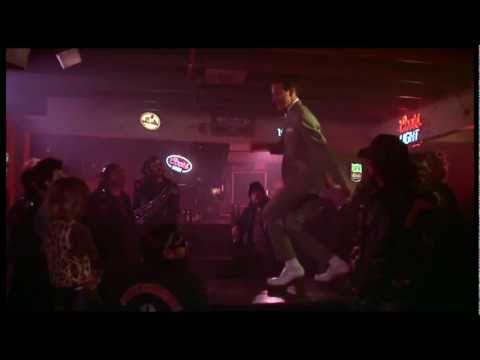 The wardrobe lady loved my imitation leather pants, and leopard top. She gave me a leopard vest and some dangle earrings to complete my easy rider ensemble.

I went back to the location, and talked with Harvey, and then Phil Hartman showed up, and we talked shop over more coffee, and we gabbed with Paul between shots. He was very happy with the crew, and the director, Tim Burton, who he felt was perfect for the project.

It was finally time to do the scenes with all the bikers. The Queen of the Bikers, Cassandra Peterson, also a fellow Groundling, then showed up on the set. She had needed some extra time to get into her “motorcycle mama” mean and nasty, super-studded, low-cut leather, I-can-hardly-breathe-in-this-thing top. Her own red hair was ratted into a high beehive. The boys were happy to see her.

“Oh, Hi Terry!”, she squealed, just like a high school girlfriend. “I love your outfit!”

“Yours is pretty nice too,” I laughed, staring at the studded creation as we walked toward the rest of the gang. 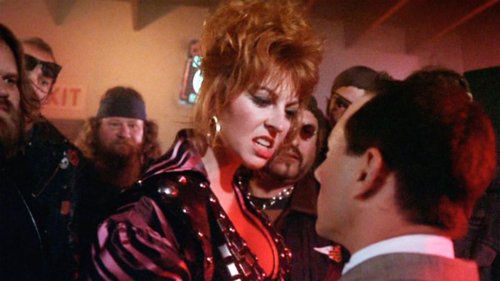 Well, as soon as word leaked out that these lugs would be sharing the screen with none other than Elvira herself, many Instamatics were pulled out from cut-off Levi vests! You never saw such posing and snapping except when Santa is at the mall!

Since it was a real bar, it had real beer! So we was drinking on the job! We shot the scenes of Pee Wee walking in, trying to make a phone call, and almost getting beat up, until he wins them over with his unique charm. He then takes off on a bike, and has a mishap! Pee Wee’s stunt double was Corey Eubanks, Bob”making whoopee” Eubanks son.

As we all spill out of the bar to see Pee Wee off, the gang gathers around Pee Wee on the bike, and I’m so short, so everyone (big as doorways bikers) are blocking me. One of them pushes me right out front, and you can see me sort of bounce into the shot. Thanks, Dude! Always ready for my close-up!

It was a long day, lasting well into the evening and past a second meal. I became a biker zombie, partied out and pooped! 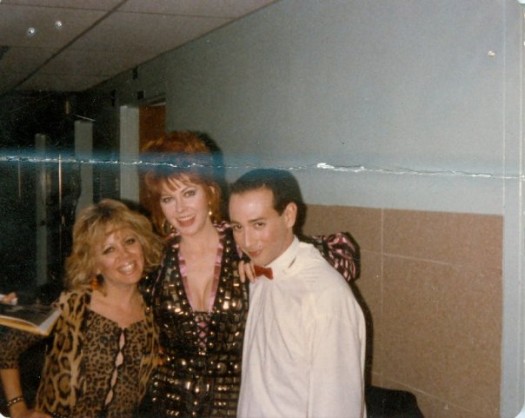 Long after Paul, Cassandra, Phil, Harvey, and I, and all the rest of the crew were long gone, several of the boys stayed on drinking beer and playing tunes like “Tequila” on the juke box, celebrating their show biz debut. I heard the proprietors of the place finally gave them one of the teeny motel rooms out back, to rest their weary bones and bikes for the night.

Check out more from The Hollywood Gal here!