Home / Book signings • Fanboying! • Stars of the 1980's and 1990's • The Scarlet Starlet / The Scarlet Starlet Meets Action Legend Arnold Schwarzenegger At His Book Signing For Total Recall: My Unbelievably True Life Story! Autographs! And He Will Pump You Up!

It must be my birthday! How else to explain getting two articles from the awesome Scarlet Starlet! I’ll tell you, the UK is killing it here at MTF! I’m sure you all saw Daniel’s report from the Arnold Schwarzenegger book signing earlier and not Scarlet is chiming in on her experience with the Running Man star!

Personally, I like Arnold Schwarzenegger but I have him on my Total Recall mini poster so I’m good for now. LOL… Check out Scarlet’s full recap after the jump!

Four days after I met the awesome Paul Bettany, I get the chance to meet another of my top three most wanteds – Arnold Schwarzenegger!

It was a last minute outing – I only heard about it the day before; scheduled for 10.30am the next morning at Waterstones Piccadilly. It meant a very early morning for me – a 4.30am start; catching the the very first train at 5.50am got me up to the bookshop for about 7.15am. At first glance I was overjoyed – there only seemed to be about 30 people waiting. So I took up my spot at the end of the queue and said a cheery ‘hello’ to the person in front of me in a sleeping bag – who politely pointed out that she wasn’t the end of the queue… what I’d thought was a large number of people waiting at a bus stop, was actually the continuation of the queue. Oops. To quote the IT Crowd: “Egg. And my face. Were in alignment.”

So I wander myself off, trying not to look at the crowd of people whose places I innocently just attempted to jump. Staring at peoples feet, I follow the line and just when I think its finished… it turns a corner! Right, down the side of Costa Coffee I go! Mercifully, the queue ends about two-thirds down the side street and I assume my space. 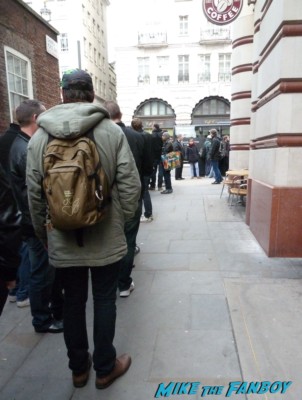 Have I mentioned that the sun wasn’t up at this point? I had the pleasure of watching it rise from the random side street! :0) Other people are joining the queue, slowly and steadily… it reaches the end of the side street when at about 8am the Waterstones staff start handing out tickets (for wristbands which would follow) I got ticket number 173 – it was then that I discovered that there were only about 250 being given out; so I’m very glad I didn’t miss my train. I’m quite relieved to have gotten a ticket – the queue was so extensive, I was worried that I might even have come too late… 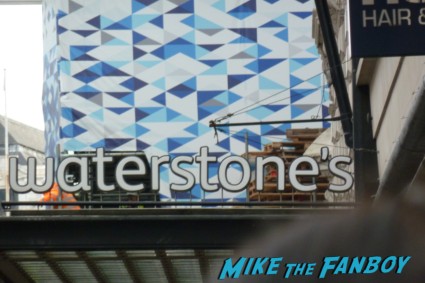 Whilst waiting, we’ve been explained the T’s & C’s several times – Arnie is only signing his autobiography (no memorabilia), strictly one copy each, no personalization, and no photos with (although photos from the queue are ok).

The next couple of hours, there was enough gradual movement to keep me occupied. We were given the wristbands, and the queue starts shuffling forwards. It feels a little harsh when I have to wait outside a chocolate shop – I really shouldn’t be craving chocolate this early in the morning, but I’m not immune to the temptation! 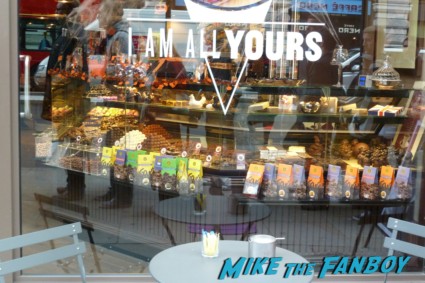 Gradually we file into the bookshop to buy our copies of Arnie’s autobiography and re-assemble into a queue upstairs. 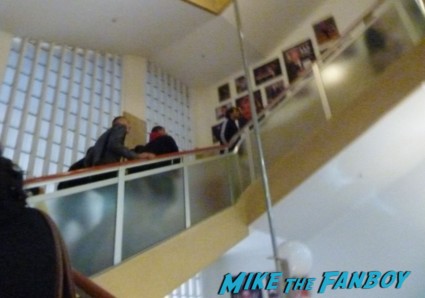 I say queue… by the time I’ve gotten upstairs the ‘queue’ stands five persons wide, but we’re all going to get in, so there’s not too much worry. 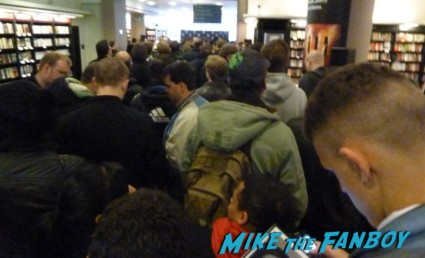 Looking around this queue I notice that there are substantially more chaps than ladies out for this book signing. I’m surprised, although I suppose I shouldn’t be!

Due to start at 10.30am, we are all waiting anxiously for Arnie – it’s about 10.50am when he suddenly appears without warning or fanfare or introduction! As I mentioned, the queue is about five people wide and I’m on the wrong side and too short to try and get a photo, but that’s all okay, ‘cos I’m going to get closer! Arnie heads over to the table at the front of the queue. 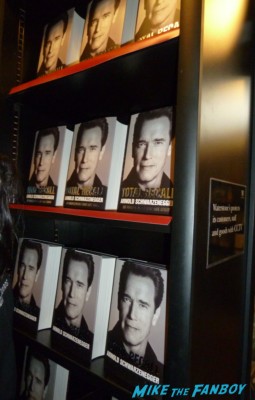 The line starts moving, and as we edge close I’m trying to get some photos. 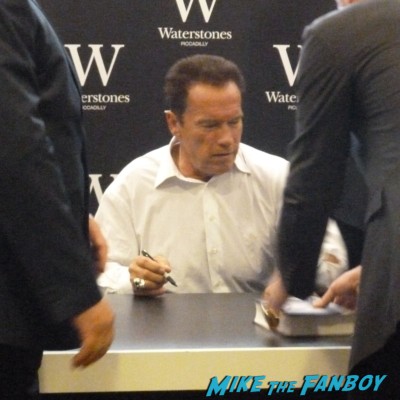 The queue snakes round, and Arnie is signing quite swiftly. I hear he’s only here for about an hour, but I don’t know how true that is. We’ve got to get our books open to the correct page, and we’re not allowed to take bags up. 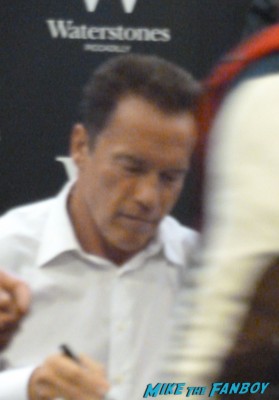 As we get closer, I can see that Arnie is flanked by security and Waterstones staff, and there are a further two security guards ushering people through. 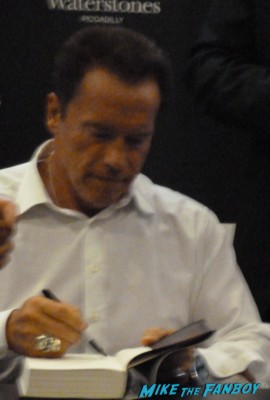 When its my turn I smile, say something about how cool it is to meet him; 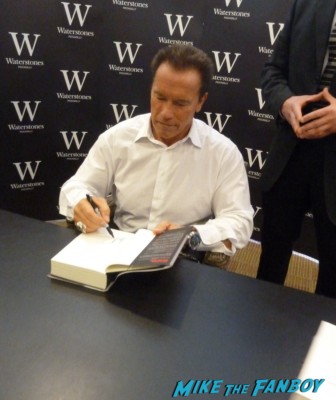 he signs my book – a lovely full signature – and I think as he hands it back he looks at me and smiles. 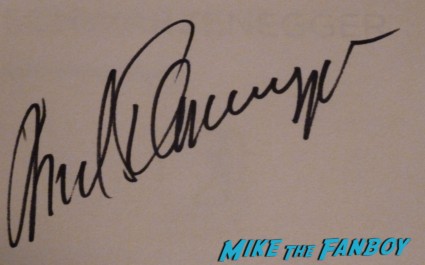 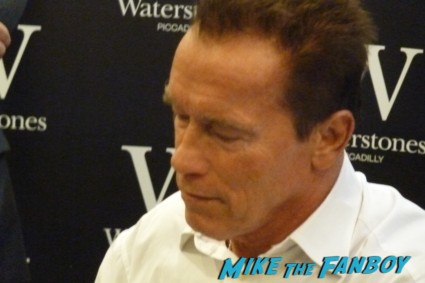 That’s it – the security guards gesture to my left, and I obediently get out of the way for the next person.

I’m really pleased with my autograph – it is beautiful! Not much of a chat, but I didn’t really expect one, so I’m not disappointed in the least! I met Arnie! How many opportunities would one have to do that?

Odd to think it was only about 11.30am when I got to leaving the shop. Kind of a lot has happened so far today… but I now I’ve still got a half day of work ahead of me… Maybe now is a good time for some of that chocolate… and some caffeine… 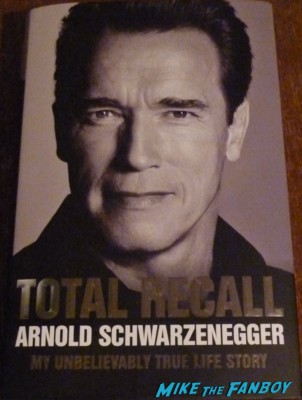 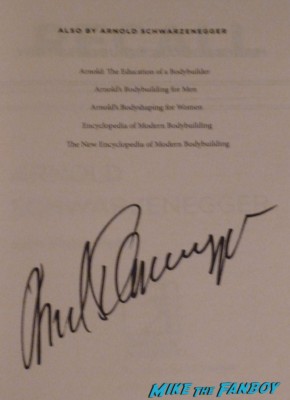