The Walking Dead Ep. 7
Sing me a Song
Or
Negan finds a New Pet

Well we were all waiting to see what Carl (Chandler Riggs) would do once that truck stopped. But I did not expect a guns blazing kind of thing! I guess with Jesus not there to reason with him he just went with his rage. The only thing that was annoying was once Negan (Jeffrey Dean Morgan) popped out Carl didn’t fill him full of lead. Yes, I know he was “hiding” behind people but the whole shooting the guy in the truck was fine but NOW he doesn’t want to hurt anyone?! The Saviors are all bad guys, just take them out. But then of course the season would be over and we’d have no story, right? 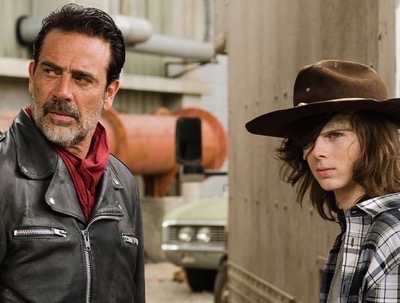 So let’s get to what did happen. Just fascinating. It was our first look into the psychology behind Negan. We saw his harem of wives, which showed even his violent nature needs intimacy sometimes. We saw that jerkface Dwight’s (Austin Amelio) former girl Sherry (Christine Evangelista) seems to have a really strong connection with Negan in the sense that he actually listens to her and she’s not just a mushy pound of goop in front of him. She probably actually helped Mark (Griffin Freeman)from being killed even though he still got the gnarly Dwight tattoo of the burning iron to the face! But his curiosity in Carl is the most fun thing about this episode. He takes him around, shows him what having his power is like, and what it gets him. He loves how brave Carl was to come in and try to take him out even though his goal was Negan’s own demise. But to prove his continuing dominance he still tells Carl he has to pay for killing two of his men. And what strange thing does he want? He wants to see Carl’s shot out eye! Oh Negan you nutjob. So as much as he doesn’t want to, Carl shows it to him and the humiliation that Negan dictates by making fun of how bad and gross it looks brings Carl to break down in tears. After all this time of trying to be a man and show how tough he is we’re shown that inside he’s still just a kid. 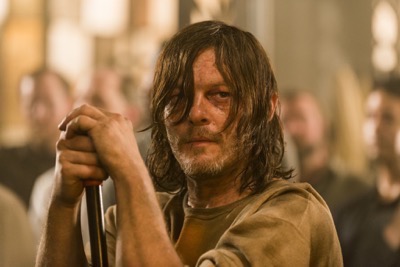 The surprising part is that it actually gives Negan pause! He takes a moment and realizes what he’s done. The monster wrapped in a leather jacket just might have a human heart in there. The mistake I feel Carl makes is after the “iron branding” scene they come back again to Negan’s room and while he’s trying to figure out what to do with him Carl says he better kill him before he kills Negan first. THEN he has the nerve to say to him that he should kill him and his dad but he can’t. What are you doing?! You’re poking the bear, dumbass! So then Negan just looks at him and says, “Mayybe.” I don’t know what he’s thinking but I’m sure it isn’t good. But what he is thinking has him wanting to take Carl back to Alexandria. When they arrive there Negan goes to his favorite girl he likes to make squirm in Olivia (Ann Mahoney) and asks her where Rick (Andrew Lincoln) is. She tells him he’s out scavenging and makes a comment about how they’re starving because of him taking most of their supplies. So Negan responds with “starving” and as he points at her says “you.” Making a jab at her being a plus-size woman. It’s one of those few dark comedy moments that the show has had this season. There hasn’t been much to even smile about lately. It’s kind of twisted to find funny as Olivia begins to cry in humiliation but it definitely warranted a laugh. If anyone is offended by this than well, you can call me a jerk later in the Comments. So since they have to wait he asks Carl to show him around the house and that’s when unfortunately for them he finds the room that Judith is in. And he is VERY taken with her. Yeah, I’m sure there’s not a whole lot of babies in the Savior’s stronghold. The “Lucille” wielding killer is suddenly transformed into a nurturing and tender maternal figure. And it’s a strange sight for sure to see that even after all those layers of ego, evil, and greed there is some things that even Negan can find a reason to cherish. Probably because even he recognizes the non-threatening innocence a child represents. Oh, but the look Rick is going to have on his face when he sees the man who murdered his friends cradling his youngest child? I’m sure it will be priceless. 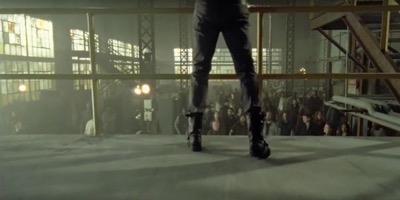 Alright so where is everybody else? Well it looks like everyone is on the “kill Negan” plan today! Rosita (Christian Serratos) and Eugene (Josh McDermitt) head out to the machine shop where Eugene had said they could make bullets from. Even though he tries to talk her out of it and tell her that it’s a bad plan to try to take out Negan she won’t hear any of it. His refusal to help consumes her in rage and she gives a nasty speech to Eugene on how he is weak, a coward, and everyone just feels sorry for him because of it. So now feeling worthless Eugene feels the only way to prove himself is to make her the bullet she is asking for. Afterwards she tries to apologize for the things she said but he’s not buying any of what she’s selling. Kind of wonder what this might do for his character moving forward. Continuing with the theme Michonne (Danai Gurira) builds herself a pile o’ dead zombie bodies as a roadblock and waits for one of Negan’s people to stop. She surprises the woman who gets out and with a gun to her head asks to be taken to Negan. Question though? If the zombies are technically already “dead” what happens when you actually kill one? What do you call that? Hmm. Someone let me know? 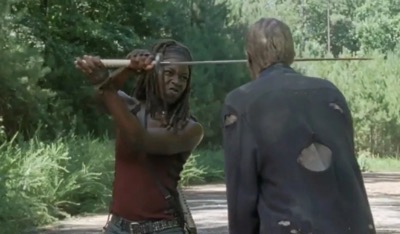 One of the random sub plots (there SO many) has Father Gabriel (Seth Gilliam) and annoying Spencer (Austin Nichols) out for a scavenging drive and they get in a discussion about Rick and how he’s run things to where they are now. Spencer does not hold back and holds Rick responsible for how his life has gone to crap and he’s lost his brother and mother. Okay, I can see his point of view but he acts like Rick purposely wanted all these bad things to happen. Obviously he’s blinded by anger and grief and has to blame someone for his loss. The best part is Father Gabriel tells him he’s “a tremendous shit” and can’t even stand to be in the car with him. He gets out and walks back! Doesn’t wait till they’re done, just starts heading back on his own. They’re really doing a great job transforming his character from when we first met him! I officially don’t trust Spencer. I have a feeling he’s going to find a way to betray the group just to get back at Rick. Hope I’m wrong but I feel that’s where it’s going. 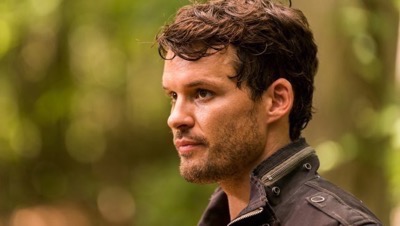 Next episode is the mid-season finale! Is Daryl going to escape? Who gave him the key? What’s going to happen when Rick gets back to Alexandria? Is Michonne or Rosita going to succeed in killing Negan (probably not)?! Where did Jesus go after he got off the truck? And where the hell is Carol?! Can’t wait for Sunday!