The First Day Of The Rest Of Your Life 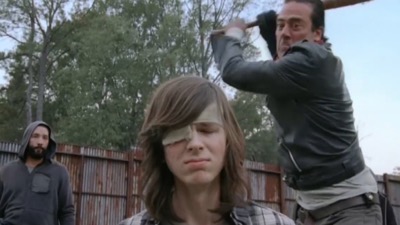 It finally happened. All the long waiting since we had to witness Glenn and Abraham get put down by Negan’s weapon of choice Lucille has come to this finale. I admit I was REALLY worried we were going to be left hanging in the end with both sides facing off staring at each other with intense gazes and then just a quick cut to black. Very glad I was wrong.

We were left with Dwight (Austin Amelio) making his play with Rick (Andrew Lincoln) to help them in taking down Negan (Jeffrey Dean Morgan). Not only do I agree with most of the characters in not trusting this worm it makes sense from the viewers aspect that he’s full of it since Negan has revealed he’s aware of them being up to something. Plus… he’s Dwight! At what point has he ever been a stand-up guy? But Rick agrees to trust him and bring him in on the plan to which is only reassuring because Daryl (Norman Reedus) makes the comment that he’s going to kill Dwight after they take Negan down. Looking forward to that. 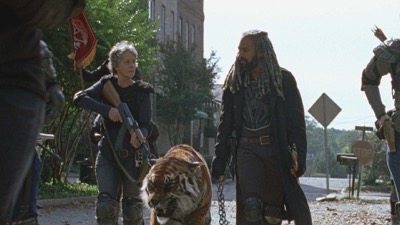 Back at the Sanctuary we check in on the one person we knew this episode would be a lot about Miss Sasha (Sonequa Martin-Green). Negan comes in with his smiley faced pancake to give her as like that’s supposed to just entice her more to help him. Man, is this guy cocky. They go over his plan to use her against Rick and how he has to take three lives to punish them for their insubordination but, in a tense negotiation Sasha gets him to agree to only taking one life. Which in hindsight is such a telling sign that she already knew what her plan was to undermine him. The flashbacks that they used to show her with Abraham (Michael Cudlitz) before the night he would get killed were those intimate moments so we could just love her and the relationship that ended too soon only made it more obvious that even though we didn’t know exactly how, that this would be her last episode. Half the fun of this show is the surprises and that was one not only showing their cards too much but also with the public knowledge of her going to on to Star Trek it was more of a matter of just seeing it happen.

But moving on we’re shown the Hilltop and Kingdom groups getting together preparing for the fight we know is coming. Maggie (Lauren Cohan) makes such a great leader in a series that has repeatedly beaten down her character with arguably the most lost loved ones it’s such a nod to how tough this woman is that she continues to move forward. And seeing Carol (Melissa McBride) all geared up and holding a weapon warms the heart in maybe a disturbing way that we’re all so thrilled that she’s back to her badass self. 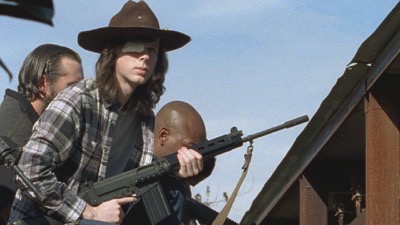 In Alexandria our junkyard dwelling group the Scavengers arrive on bicycles and in garbage trucks which is so fitting of them it’s impossible not to chuckle. Everyone all strapped with rifles lines up at the fence and awaits for the Saviors to show which they sort of do when Eugene (Josh McDermitt) shows himself on a truck bed. He pleads with Rick to surrender to the Saviors so that none of them have to get hurt but we all know this time that Rick is done with backing down. Unfortunately the rug gets pulled out from under all of them as the Scavengers betray their allies and turn their guns on everyone in Alexandria. Ohhh you bottom feeding dicks! It’s bad enough that their group is pretty annoying with their post-apocalyptic Yoda style speak but then to find out that they have no loyalty and just sold themselves to the Saviors on a better offer. Now that they have them at a disadvantage Negan shows himself and does he want to gloat! He shows a coffin that he says has Sasha in it so they better all surrender and give him lots of stuff to make up for it or he’s going to kill Sasha. Basically his same speech he’s been giving since Day 1 and I was definitely really perplexed at this point how the hell the Alexandrians were going to get out of this. But this is where at least the Walking Dead is good for some surprises because Negan opens up the coffin and out comes Turned Sasha! She took the pill that Eugene had given her on the ride over to sacrifice herself for her friends. See, remember I said IF they’re going to bring back the pill there had to be a reason. 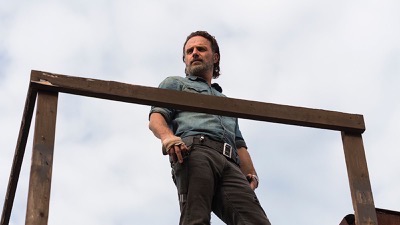 And now all hell breaks loose as this jarring distraction gives the Alexandrains the moment they need to retaliate against the Scavengers on the inside and the Saviors on the outside. The weird thing is it only seems to happen for like a fraction of a second and then Rick and Carl (Chander Riggs) are being put on their knees and under Negan’s mercy again. While I don’t like the start/stop thing it makes sense being as they definitely didn’t have the numbers to win but mainly I felt it was done just so Rick and Negan can have that possible last face to face where Rick tells Negan he’s still going to kill him. “You’re all already dead,” he says. The look on Negan’s face is an arrogant smile except for I saw the smallest crack of worry that he has a formidable foe in front of him. But just when we thought we might lose our second cast member of the episode we get a Shiva and the reinforcements of the Hilltop/Kingdom brigade! Guns blasting and people running all over the place as composer Bear McCreary’s score plays up the fight of people who were tired of being bullied. Might sound very elementary school but simply put Negan and the Saviors are the bullies of this universe. While it was glorious to see all the Saviors running in fear the firefight was far from the best in the sense that all our heroes are just running around in the open shooting people and not one of them even gets nicked by a stray bullet (Rosita got hit in the first round). A little ridiculous but not as bad as when Negan is hauling ass out in his truck with his middle finger out and the ten people shooting automatic weapons couldn’t hit him?! What are these people Stormtroopers in training? But just like Negan the damn Scavengers drop some homemade smoke bombs and escape as well. Well crap.

In wrapping all this up we’re given a scene where Negan stands over his Saviors and says “We’re going to war” while Maggie is shown giving more a campfire talk to the people back in Alexandria. My thought though is how the hell are they realistically going to take on the better equipped Saviors? I hope for some crafty tricks here because one on one they will lose otherwise. And what about the Scavengers? They still have a massive arsenal so they’re still a threat, right? At one point Daryl finds a little wooden figure by the fence that says “didn’t know” which suggests Dwight is still on their side. I guess maybe this guy might finally have turned legit but I’m still far from inviting him to dinner. The lines have been drawn, the first stone cast, whatever cliché you want here. I’m just glad it’s finally started but it’s going to be a long wait until October.