Now, you might have seen my previous post about heading down to the filming location of the Veronica Mars filming location. Well, after getting a frenzied call from Liz, AKA Marshmallow and her husband Greg AKA Cliflvr12, I had to go back.

Today was the first day of shooting the big reunion and pretty much everyone would be on set. Swoon…

I can’t tell you how exciting this has all been. We’ve all contributed to the Kickstarter campaign and have been stoked that this is actually happening. In fact, if feels like a dream.

The problem… No one would go. Billy was dying to head down but alas he couldn’t be reached. CB was going to come with me but he bailed. Marshmallow and Cliflvr12 were already heading home. I just hate going to things like this myself. It’s so much more fun with another person.

Finally, I get a hold of Billy Beer and he freaked out and jumped in the car. We met downtown and got the info from Marshmallow were they were.

There were four other fans waiting and we settled in. As I said before, I really hate being a nuisance on set, so you have to pick your moment to ask anyone for a photo or anything.

Plus, I had the mini poster I started the previous evening and another mini poster as well.

Sadly, they were filming inside which means we didn’t get any spoilers. Doh… I kind of like it that way though. I mean who wants to know everything right?

Immediately, I spotted Chris Lowell who played Piz in the third season. I didn’t say anything though because he was talking and then I think getting ready to head to set.

Billy and I hung out. He really wanted Krysten Ritter and Kristen Bell. I wanted everyone else, lol… Especially Amanda Noret and Tina Majorino! They are my favs, besides Veronica of course!

Then I think there was a break in filming Chris Lowell was walking back and was super nice. He took photos with everyone and was super stoked about being in the movie. 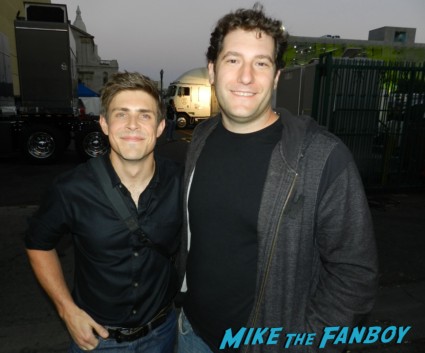 A few minutes about Chris left out came Amanda Noret. I was so excited! And let me tell you Amanda is so so so so nice. She chatted with us and then was happy to sign both of my mini posters. 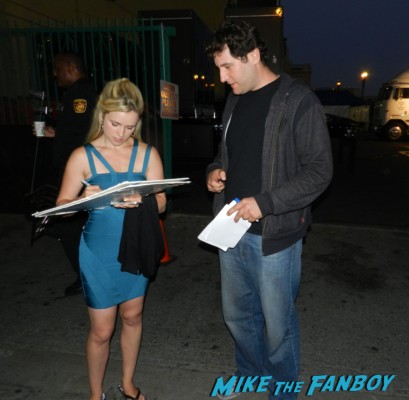 She actually had me hold her sides and I promised I wouldn’t read them. LOL… 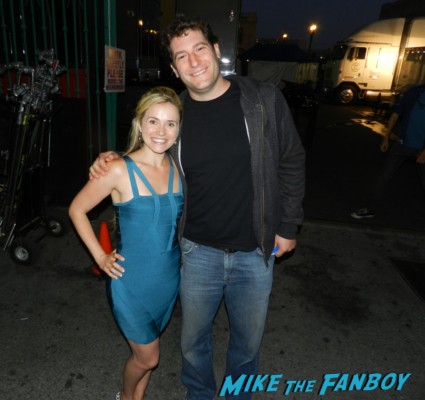 Billy got a photo with Amanda Noret as well. 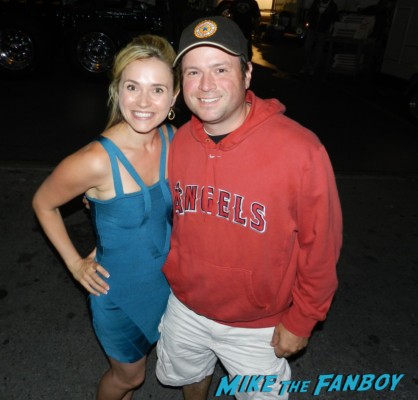 Then Amanda came back after she left the set and said she wanted a photo with us! Awwwwww…

Then she tweeted it out! Dying now! Madison Sinclair just tweeted a photo of me! 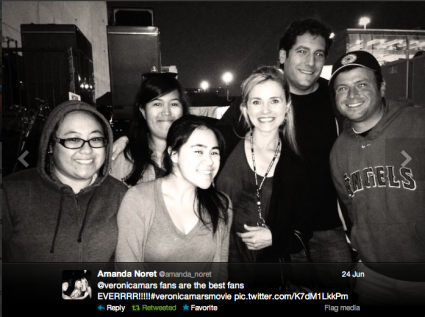 Percy Daggs III is walking back, and let me tell you… He is so nice. I asked him if he wouldn’t mind signing and he was like, “Oh yeah!” I mean I was really impressed with how cool he is. 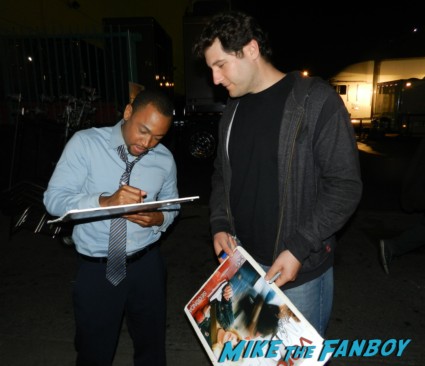 We talked about the kickstarter campaign for a hot second and then I got a quick photo with him. So excited! 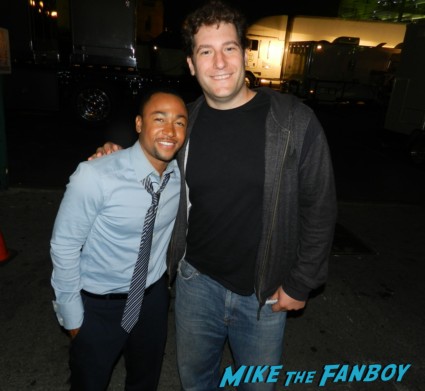 It’s getting towards the late side and I think that filming is starting to wrap up. Jason Dohring is leaving and he stops and is hella awesome as he usually is. Sadly my photo turned out like crap, but I was able to get him to sign my other Veronica Mars poster. 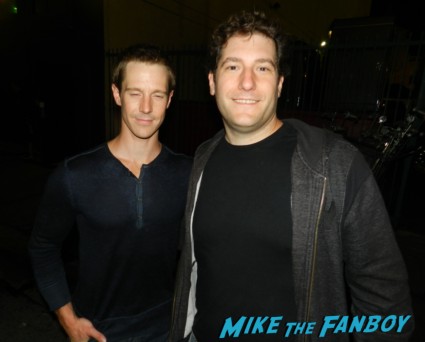 I would have asked for a redo photo but Tina Majorino was walking back and I needed a photo with Mac. I have to tell you I love Mac. She rocks and I love the new punk rock haircut. 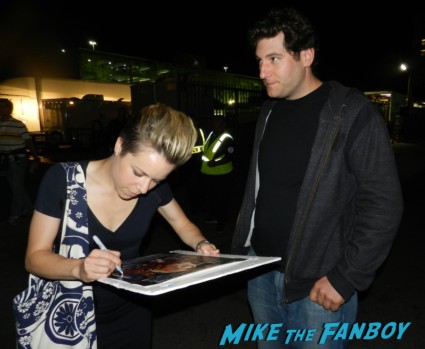 Tina is the sweetest person ever. That’s one thing I love about this cast they are all so sweet. It’s so rare when a full cast is so nice. 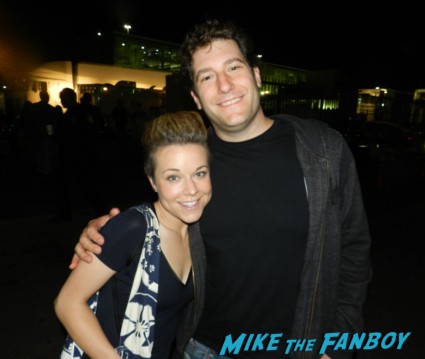 Billy and I got photos with Tina and then Tina signed both of my photos. I told her that I was wondering if she would have her streak in for the movie. She said, “I know! I thought of that.” But I told her I love the new haircut. lol… 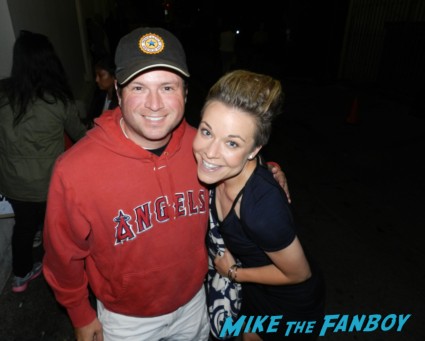 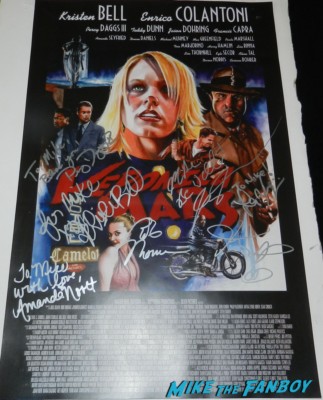 Then we saw Kristen leaving but she was on the phone so we didn’t bother her. I have to tell you though. I don’t know what happened but clearly something occurred on set and someone was being escorted out and to the base camp. Kristen came over to talk to her and told her how everything was fine and things like that happen, and then gave her a hug. It was so sweet. You can always tell people’s try character when they don’t think anyone is watching and to take that kind of time out for someone was adorable.

One of the other girls that are here (there are four of us) saw Kristen leaving and Kristen called us over. We lined up and Kristen was so nice. She signed my poster and then Billy’s photo and took pictures with us. 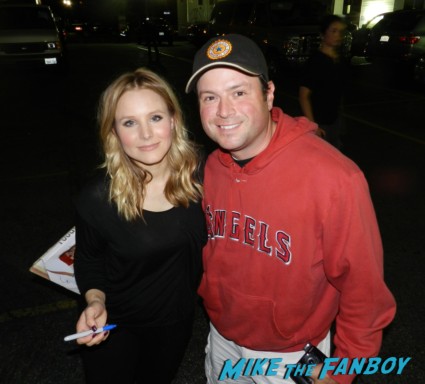 Sadly, Billy didn’t hold the camera up so I look like a giant, but Kristen looks great! 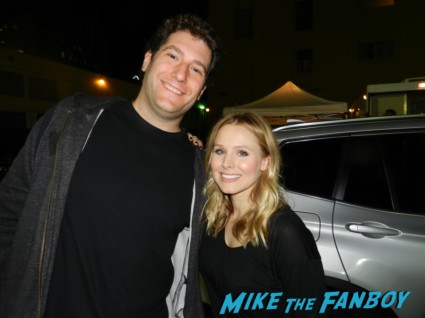 I can’t wait for this movie! I’m so thankful that Marshmallow and Cliflvr12 convinced me to head down! It was so fun. And again everyone was so sweet! 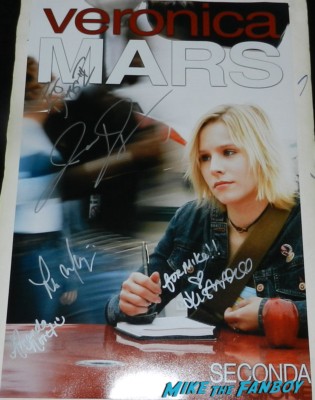