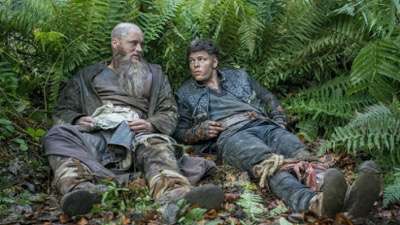 When last we left Ragnar (Travis Fimmel) he was recreating Leonardo Dicaprio’s role in Titanic after his ship destined for England was tossed over in a storm out in the big sea. In the opening of this episode he awakens with his son Ivar (Alex Hobe) on the beach. Hey, he made it! Maybe not the way he wanted to but back then I’m sure you didn’t have the luxury of bitching to your travel agent. After regrouping with the few of his people that survived they go into the forest to cover from the impending English soldiers they know will be roaming about. Ragnar’s soldiers are none too thrilled that his master plan has literally fallen apart and looks like a complete failure. But of course he blows them off and tells Ivar that he never planned on going back home anyways. So what now? Obviously the small band of rejects he has to carry out his attack are not enough so what does the former king do? He calls an audible and kills them all in their sleep! Well that sure is a lousy reward for loyalty but I guess they were just hired thugs so they didn’t mean much to him. Now with it just being him and Ivar he decides to just show up on King Ecbert’s (Linus Roache) doorstep with his hands up in surrender. But did you see the sly smile on his face when the soldiers were running to get him? Yeah this guy is definitely up to something! 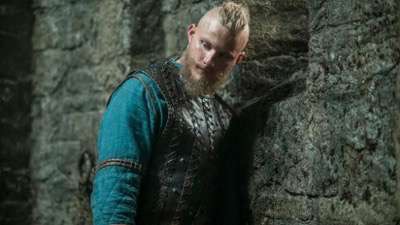 Shifting our attention over to the fleet of ships that DID make it, Bjorn (Alexander Ludwig) and Co. land in France and request a meeting with the traitorous Rolo (Clive Standen). Bjorn needs Rolo’s approval to allow his ships free passage past France to explore the Mediterranean Sea. Surprisingly against even his wife’s wishes not only does Rolo approve but he tells Bjorn he’s coming with him! But little did he realize that Bjorn and Floki (Gustaf Skarsgard) have not forgot the wrongs that he did to their people. They tie him up and throw him overboard and only pull him up just before he drowns. Ha! That’s what that traitor gets. But I’m very curious what Bjorn is going to do with him after this.

Meanwhile back on the Viking homeland our favorite shield maiden Lagertha (Katheryn Winnick) is beginning to hatch her plans to take back Kattegat. She brings the remaining  Ragnar sons favorite slave Margrethe (Ida Nielsen) for a visit because even though she wants to take back her village she doesn’t want to harm her former husbands children. She invites Sigur (David Lindstrom)  and Ubbe (John Patrick Smith) out to have dinner and tells them that they need to come up with a solution to decide who will be with Margrethe because she has feelings for them both. With them properly distracted by her Lagertha dispatches her lover/lieutenant Astrid (Josefin Asplund) to capture them and incarcerate them so they can’t make it back to Kattegat. With that taken care of she is now free to disperse her army to take back the town that she rightfully feels is hers (it kind of is honestly). With all the best warriors on Bjorn’s ships and some inside help from her friend Torvi (Georgia Hirst) her army quickly takes down the little resistance they had. It’s a little strange though because I’m sure she’s slaying many men and women that she used to know when she was queen but I guess when you want your kingdom back there has to be collateral damage. But at the same time when she can see the battle is won she calls for her army to stop. “These are my people,” she declairs. Or I guess now they are? After the fight we are shown Queen Aslaug (Alyssa Sutherland) all done up in her royal garb and taking up the ceremonial sword to give away because she knows her rule is at an end. So we have one side of the ocean where things have gone all crazy and the other side over in Europe where we still await what Ragnar and Bjorn’s plans have to yet offer up! 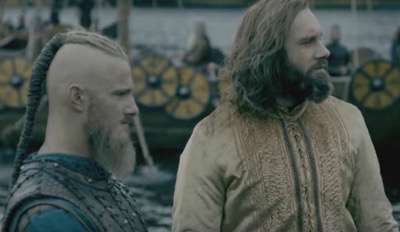