There’s so much amazing television out there right now, and one of the most unique and creative series on TV right now is Westworld. I love the show, I can’t even tell you how much.

Recently, there was a panel and q and a that I was lucky enough to attend with Lisa, Scotty and Billy. 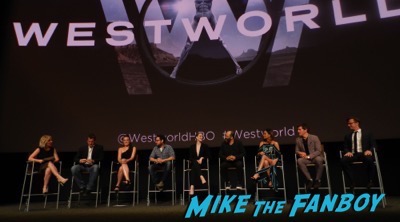 The cast and creators were very excited about the series.

“As a kid I have a VHS tape of the original movie, I watched Westworld and was knocked out by the ideas and feeling of it.” Stated Jonathan Nolan, “It was iconic really cool stuff. When JJ originally called I foolishly said no because I didn’t think we could do it.” 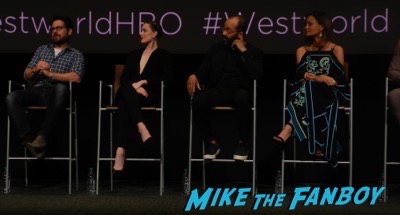 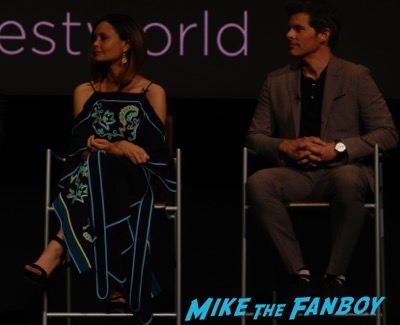 “It was interesting, I haven’t seen the original movie.” Laughed Lisa Joy, “Coming in from the outside can be a refreshing point of view. When I heard the idea of it, taking it from the host perspective, I thought it was a merging of two genres. The heart of it begins with character first and the soul of these individuals.”

“Thankfully we talked it through and everything we were interested in, AI, the human condition and all this weird dark stuff.” Jonathan added. 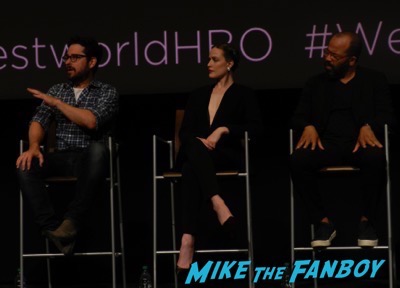 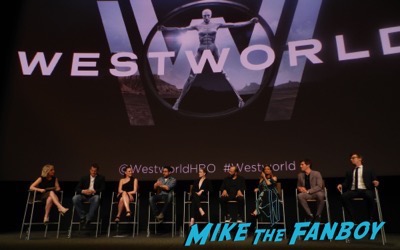 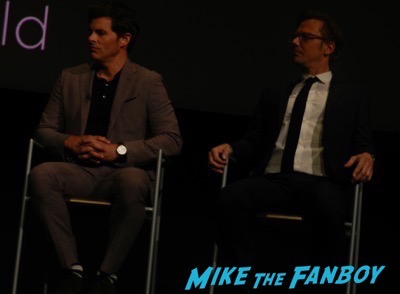 When it came to the actors they talked about the journey of their characters and the experience.

“It’s hard to even talk about it. When I signed up, I just read the pilot and we talked about the character, or at the time I thought that. I knew she was like, a ‘Disney Princess’ but that would change quickly.” Laughed Even Rachel Wood. “I went through my own journey with Dolores, personally it was a life changing experience. I might have been tipped off early on because there were multiple timelines, but I’m glad I did because it let me know my character was a multidimensional human being.” 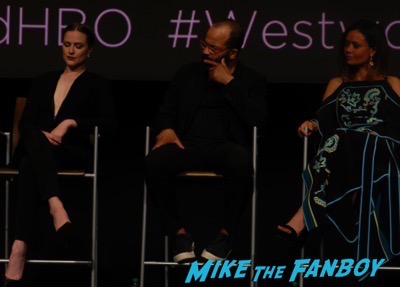 “I just found out I wasn’t a host.” Jeffrey Wright said with a laugh. “I didn’t know when we shot the pilot and then I got pulled into the office. I was shocked but with that added dimension, it gave me more dynamics to play with.”

“Dolores was programmed to just see the good in everything. Underneath all of that she is an artificial being and piecing all that together, it’s like playing three different people.” Said Even Rachel Wood. 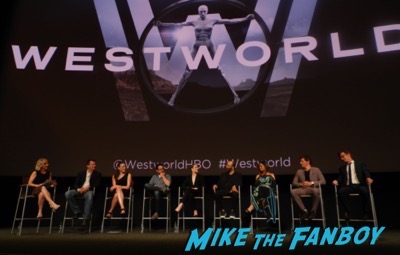 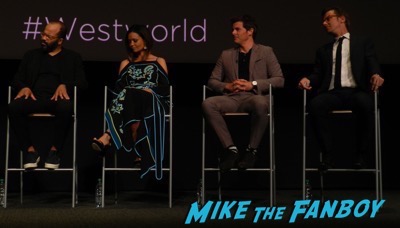 “I’m still figuring out, which point is Mae conscious enough to make her own decisions. Was it the right decision to make?” Said Thandie Newton, “Only time will tell. It was all in the script honestly.”

“I was leaping out of bed everyday to get to work. The caliber of talent here, everyone is passionate and love the characters. We have an incredible bond.” Said Evan Rachel Wood.

After the panel sadly, Thandie Newton bolted so fast off stage we couldn’t even ask her to sign. She flew off the stage.

The rest of the cast sans JJ Abrams who also left fairly quickly, were all very nice.

Jeffrey Wright was super cool. He signed my Two Westworld posters and my Funko Pop as well. 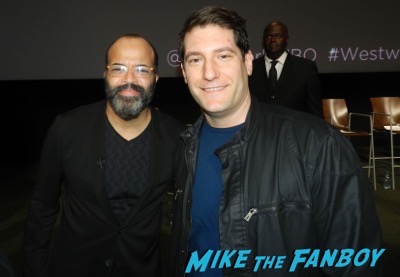 James Marsden was also really nice signing the one poster I needed him on and the Funko Pop. 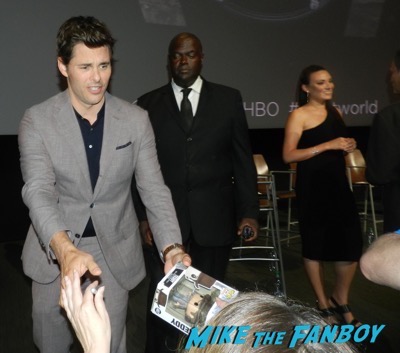 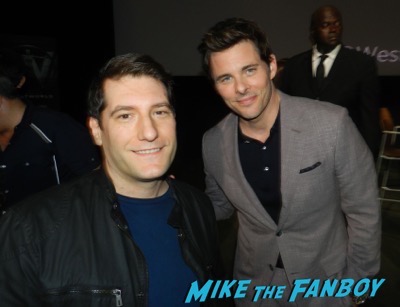 Evan Rachel Wood signed my Funko Pop and the newest poster as well. 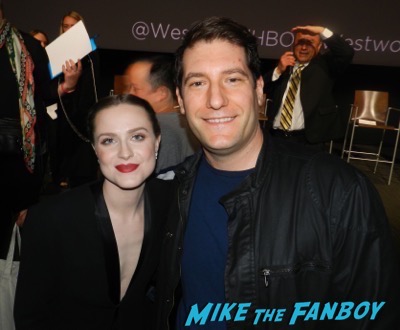 Jimmi Simpson was so sweet, signing my newest poster. 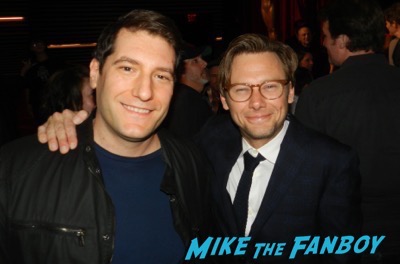 It was honestly, a great night. We also got to talk with Jonathan Nolan and Lisa Joy as well. They both signed the newest poster.

Not a bad night with one of my favorite series! 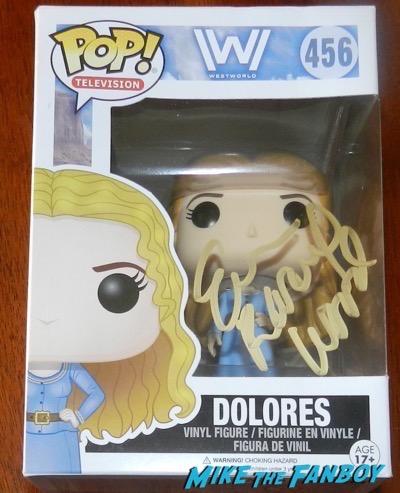 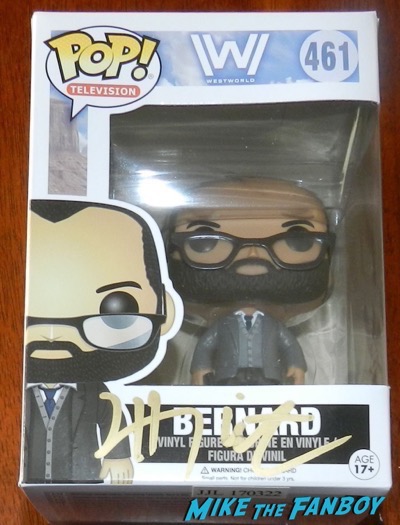 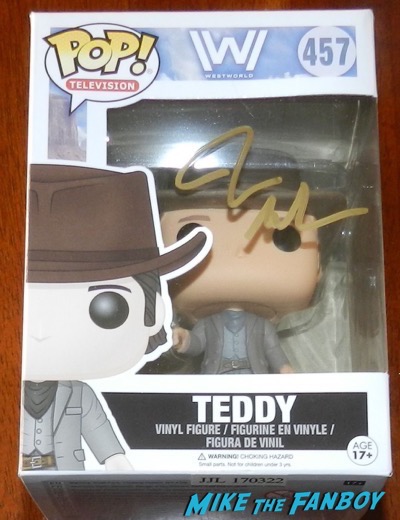 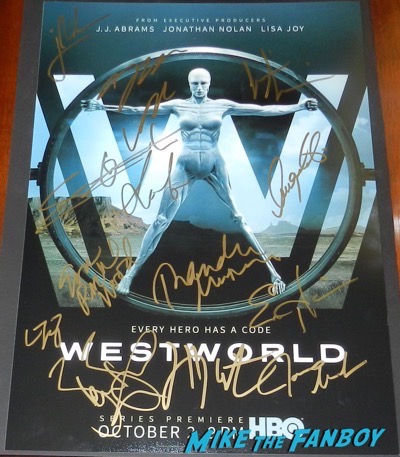 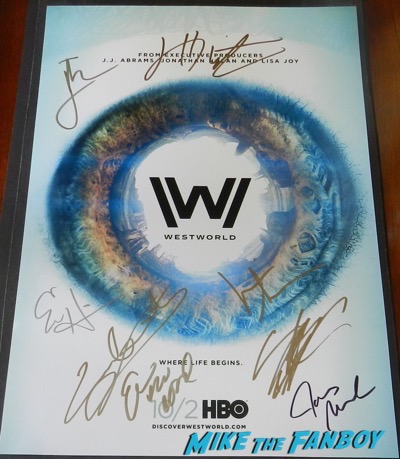 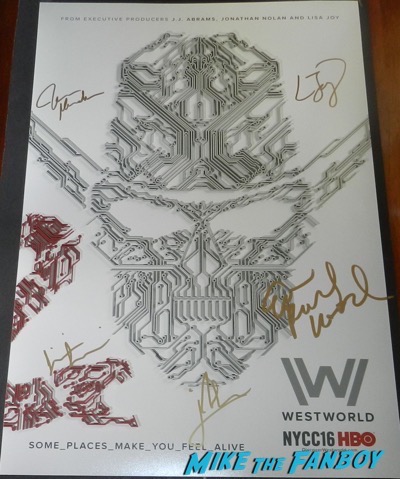