Novel Strumpet here. Long time no read! Ok, I’ve been reading just not things I’d want to review or could review (b/c I was working with the author). However, I’ve missed talking books with you all and have read some stuff lately that I want to share so get ready…

First up is a Gail Carriger doubleheader.

I’m obsessed with Gail Carriger (also writing as G.L. Carriger) and the two novellas I’m talking about are both set in the Parasolverse and feature three of my favorite pack members. Biffy (new-ish Alpha of the London Pack), Professor Lyall (he’s back from Scotland baby!) and Major Channing Channing of the Chesterfield Channings (heart him). 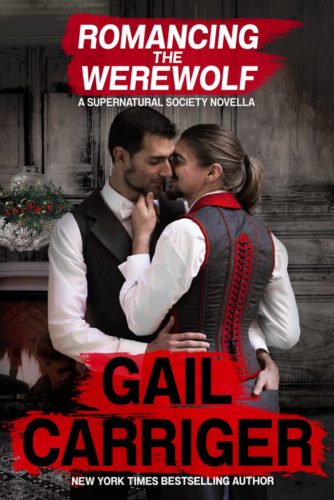 This novella begins shortly after the London Pack’s relocation and Professor Lyall’s return after decades with the Kingair pack. Lyall’s a bit baffled to see the pack has deserted their former home and moved to a different part of London, but after a quick stop by Lord Akeldama’s (raise your hand if you’d like him to call you puffbonnet or pudding at least once!), he locates the Pack and is eagerly welcomed back. The welcome he’d really like from the current Alpha, Biffy – or Lord Falmouth as he’s officially known – is a little more romantically inclined, but neither is sure if that sort of relationship between an Alpha and Beta is possible. Meanwhile, a slew of orphaned children have been showing up on the packs’ doorstep, and they need to discover why before they become a full-fledged orphanage.

WHAT I THOUGHT (SPOILERS AHEAD):
This was a great novella set in the Parasolverse and following the events of Timeless and Imprudence. It’s nice to see Biffy has settled into his role as Alpha, despite there still being some lingering fears amongst the pack that he regrets not becoming a vampire, but Biffy is definitely over the disappointment. I like that he’s kept his penchant for fashion and isn’t so unsure of himself that he sticks with the ‘old ways’ and customs ‘just because’, he respects the customs but knows some rules are meant to be broken. Fashion shouldn’t just be for the vampires after all.

The best bit, though, is the tenderness between Biffy and Lyall. Their navigation of the obvious spark between them and their deep connection was done really beautifully and just made me smile and sigh the whole time I was reading. Then again, I’m a hopeless romantic.

HOW TO MARRY A WEREWOLF: 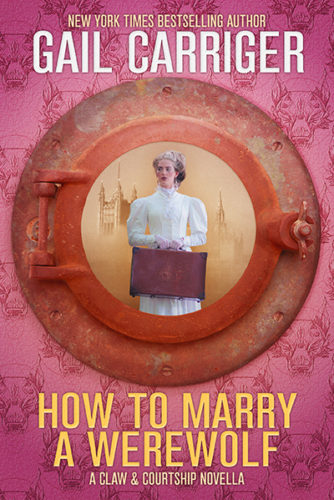 A young American woman, Faith Wigglesworth, has been disgraced and her overly zealot parents decide to send her to relatives in London so she can marry a werewolf. Which they consider a terrible punishment since Americans are severely prejudiced against supernaturals (everyone is outside of England for the most part). So off she travels by dirigible with her maid to her new fate, and the moment she steps off the ship she is accosted by werewolves, one of whom is Major Channing – who is now the head of BUR.

Channing has gotten wind that one of the passengers may be smuggling sundowner bullets into the country and so he’s having all passengers questioned and mysterious luggage searched. The young woman he stops is trouble in more ways than one, but ultimately, he has to let her go about her business since the only mysterious thing he finds on her person is her collection of rocks. Of course, sparks instantly fly.

Thus begins a non-courtship between the two who are navigating their growing attraction, while trying to deny it exists and of course there are still those pesky sundowner bullets out there like a ticking bomb waiting go off.

WHAT I THOUGHT (SPOILERS AHEAD):

The ‘mystery’ was a little easy to figure out – you pretty much can figure it was the maid from her reactions and then it wasn’t a leap to figure out Faith’s parents were involved somehow. However, this didn’t detract because it was really just a vessel to carry the yummy pudding to your mouth.

That pudding was the relationship between Faith and Channing. I really liked that despite both having personal baggage that made them hesitant to give into their obvious feelings at first, once they decide to marry they both made the mature decision to speak to each other about their issues so they could move forward. You’ll just have to read the novella to find out what those issues are. Hee hee. But it’s so refreshing to have characters speak to each other.

Overall I give both 4 open books out of 5. They were short and sweet but I didn’t feel they were rushed and they fit nicely into the Parasolverse. Also, I’m slightly biased because I’ve wanted to know more about Major Channing since he first appeared and not quite sure why or what that says about me…

Anyhoo, if this post was TL;DR but you still want to know what I thought, check out my YouTube review.

Until next time – happy reading!