I’m so excited! We need a huge Fanboy welcome for the newest fangirl on the block! From across the pond is The Scarlet Starlet!! The Starlet has sent us this great recap from the UK premiere of Cowboys and Aliens from Empire Magazine’s ‘Big Screen’ event.

I think everyone is going to get Harrison Ford on this promo round except me! Lol… Doh! I’m so excited that the Starlet has joined us, so please guys leave her lots of fun comments and welcome her to the family! Whoo hoo!

And of course check out the Starlet’s full recap of the Cowboys and Aliens premiere after the jump!

9.25am – right! I’m on the train, heading for central London. The paranoia sets in early – I’m on the first off-peak train, should I have paid extra to get an earlier peak hour train? It is Harrison Ford after all…

10.05am – sees me flying through Waterloo station towards the underground

10.30am – okay, I’ve reached the O2; everything looks quiet. That can’t be right. There must be a crowd of fans around here somewhere. I ask a security guard who points me down a corridor.

10.45am – Holy Crapola! There are only, like, 40 fans here! I turned up around this time for the Pirates 4 premiere and they were already 3-deep the full length of the barriers! What’s going on? Never mind! My gain! I get my spot at the barrier (at this stage, there is plenty of barrier to choose from!) and settle in for the seven hour wait. I have a book, I have a PSP, I have a packed lunch (so British!) and drinks; I’m set… 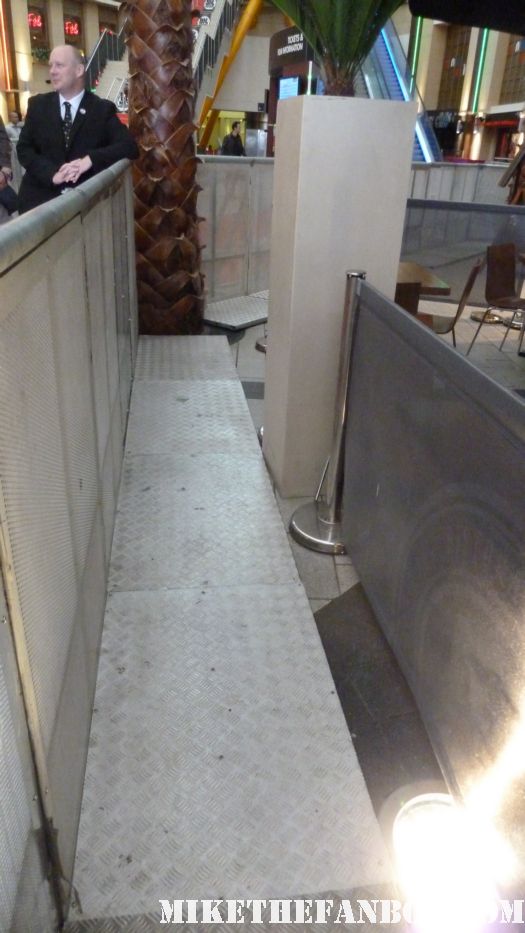 I’ll skip the middle – it was a very long day, but fortunately I met some nice people to talk to. The set-up of this premiere was strange, in that there was only a very thin fan pen area – it could only fit about two people deep. Overhearing some conversations amongst staff it seems that was intentional. Well, hopefully it will cut down on the crush when the guests come past! 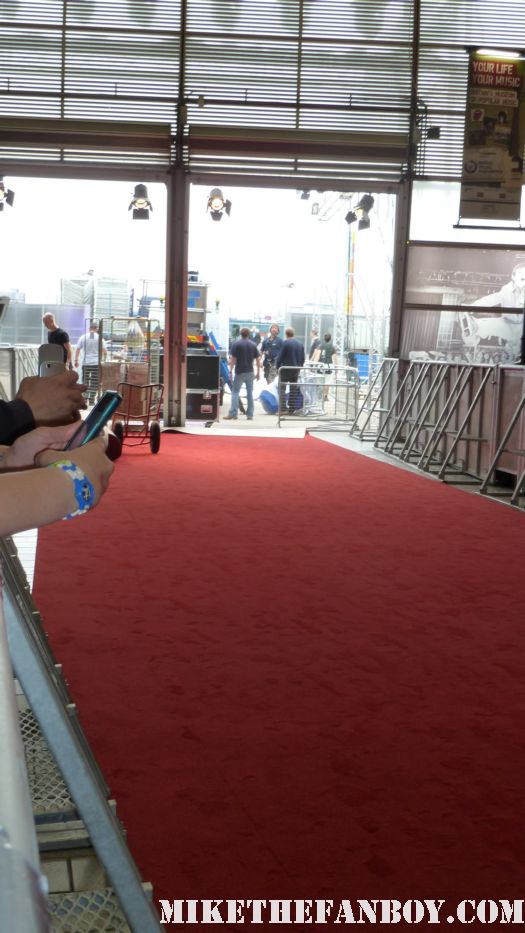 We’ve all been waiting indoors (which was nice, as it rained!), but staff were also setting out the arrival area outside. When the guests arrive they will pass the photographer pen, the press area (for interviews) and VIP area before reaching the fan pens. (This is also my disclaimer for the photos – it was very bright outside, much darker where we were, so my camera was struggling).

5.30pm – security guard is coming down the line to ask if anyone wants to move to the drop-off area. Aargh! What do I do? No on else is really moving, so I opt to stick with this piece of barrier I’ve been guarding. I really hope it pays off… 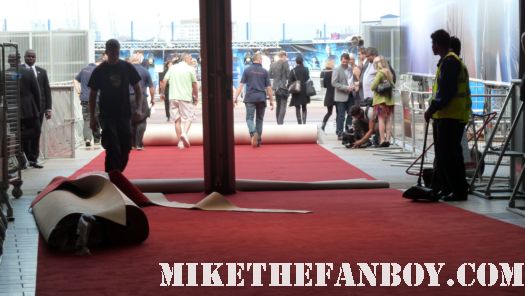 6pm – we were told people were arriving from 5.30pm. We didn’t believe them. Announcer has just said they’ll be here in a few minutes…

6.30pm – OMG everyone has just turned up all together! Jon Favreau, the writer, Olivia Wilde, Daniel Craig and Harrison Ford! They’re all here!!! They start by posing for photos, and then go their separate ways to the press and the VIP area, then back from one to the other. They’re all outside. All us fans who have been waiting patiently are inside, and we’re waiting for them to come closer…

Daniel Craig is the first to make it to the dividing line between inside and outside – we all shout for him, but he goes back to conduct an interview.

Harrison Ford is working his way down the VIP area – and the same thing happens. Patience, patience…

Harrison Ford finishes the interviews first and, true to his word, comes back and starts signing down our side of the barriers! Yes! 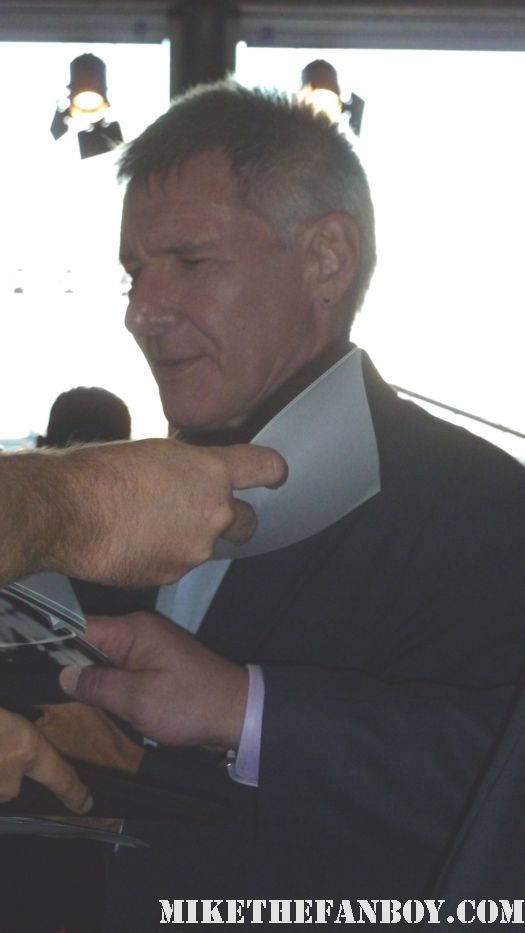 Closer and closer… people are shouting for him… how can you shout for such a screen legend by his first name? He stops signing our side, and zig-zags over to the start of the barrier the other side. Then he comes back again! He reaches me and – Yay! I get my Indiana Jones and the Last Crusade flier signed! I’m the last one he signs for on this side; he’s standing right opposite me, looks up at us and says “I’ll be back!” and heads over to sign the other side of the barriers. 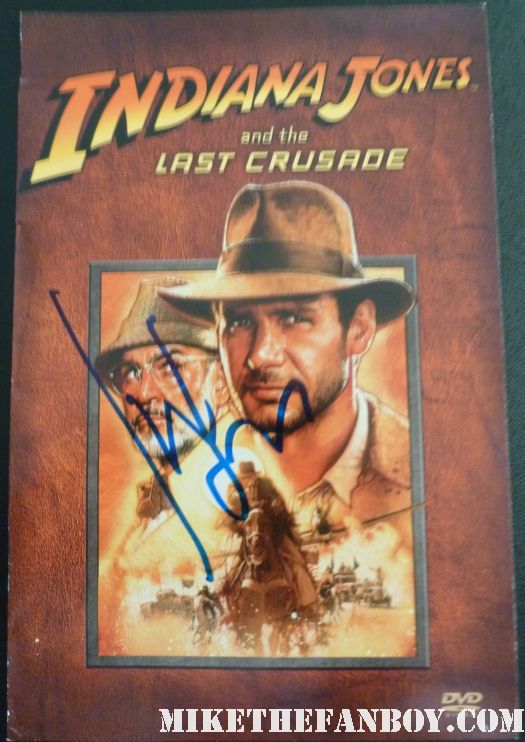 People next to me are shouting ‘Mr. Ford!’ – that’s more like it! His security team are fantastic, twice they take exact notice of where Harrison Ford has reached and bring him back to where he left off on each side – so he comes back to stand in front of me again! 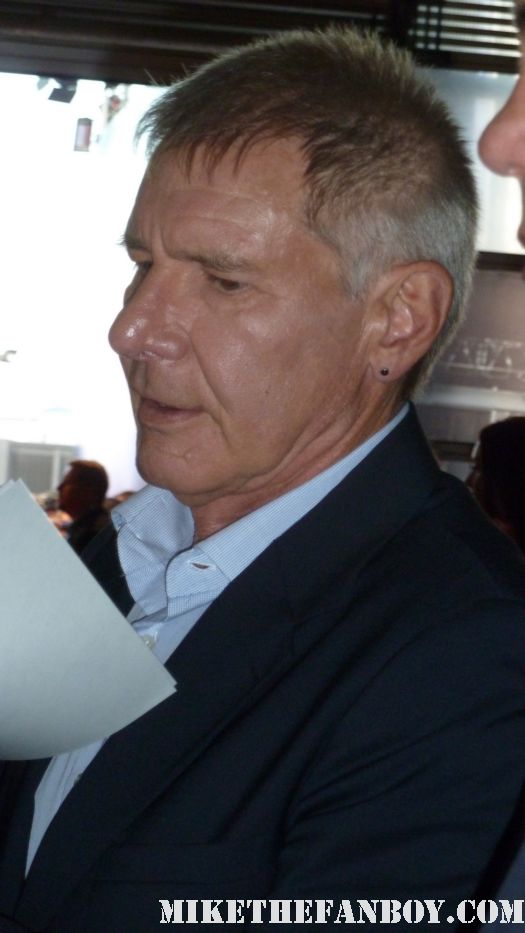 So I whip out a record card (never leave home without one!) and he signs that for me too! Amazing success – a beautifully clear autograph! 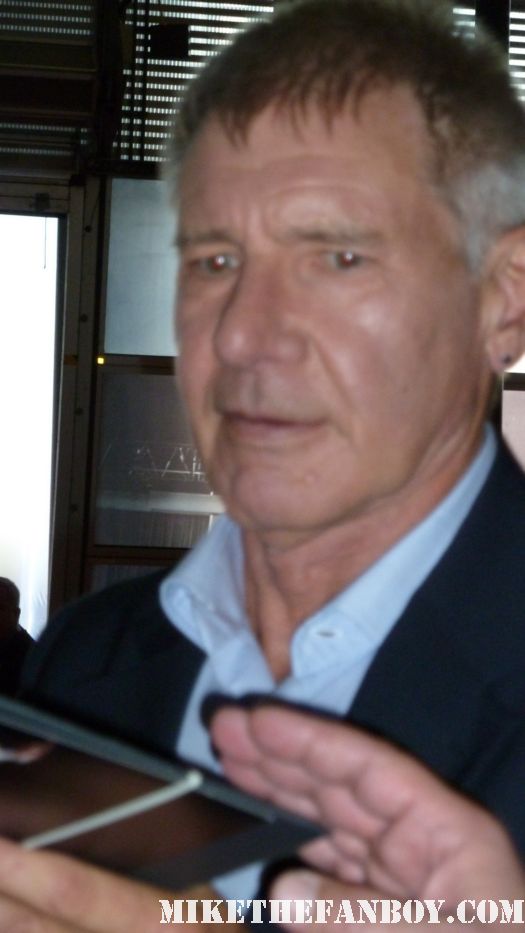 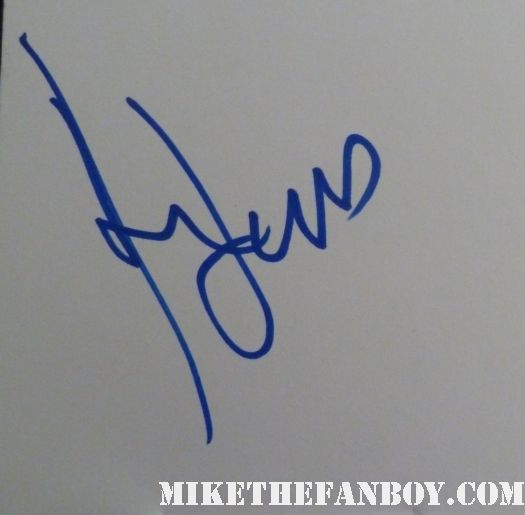 Olivia Wilde came down next; she was moving so quickly I didn’t have time to get a photograph, but she kindly signed a record card for me. 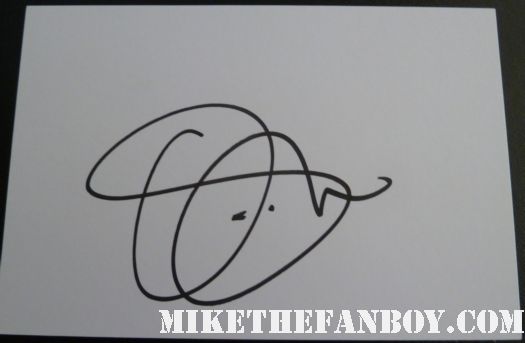 Next comes Daniel Craig! He’s great! I think he’s signing the full length of the barriers as well! He’s even stopping for photos with some fans, which he takes himself – awesome! He’s moving quickly, but coming past our section, signs my ‘Layer Cake’ DVD cover – coolness! – 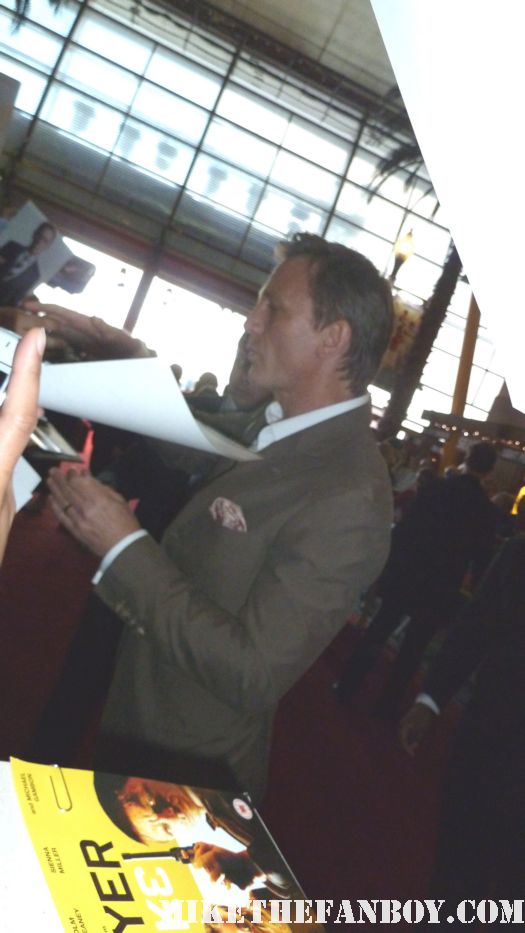 he refuses to sign something from his past work, for a chap behind me, but I couldn’t see what it was (they produce something else which he agrees to sign instead). He seems to be signing a range of things for the people moving on down the line. 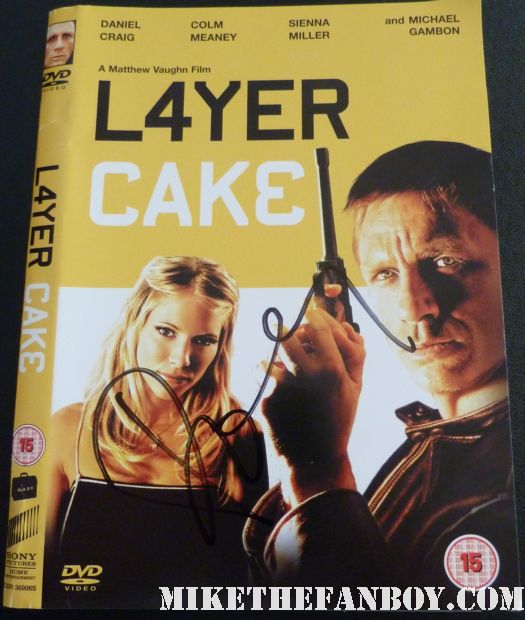 Then there was Jon Favreau – he was moving down the barrier like greased lightning! He signed for me as well. 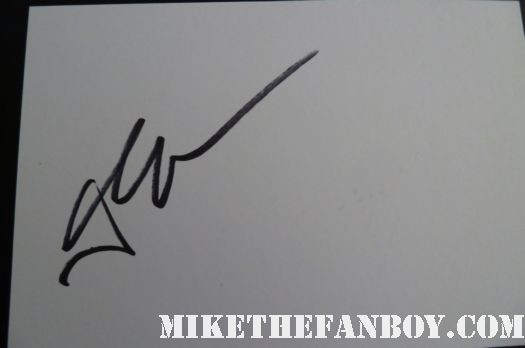 Wow – so that was everyone! The film writer must have passed us at some point, but I missed him, but everyone I went out for signed for me! Fantastic day! We’re celeb-spotting on the red carpet, and there are a few people we recognize between us. One of whom was comedian Tim Minchin, who also comes and signs for us too. Bonus! :0) 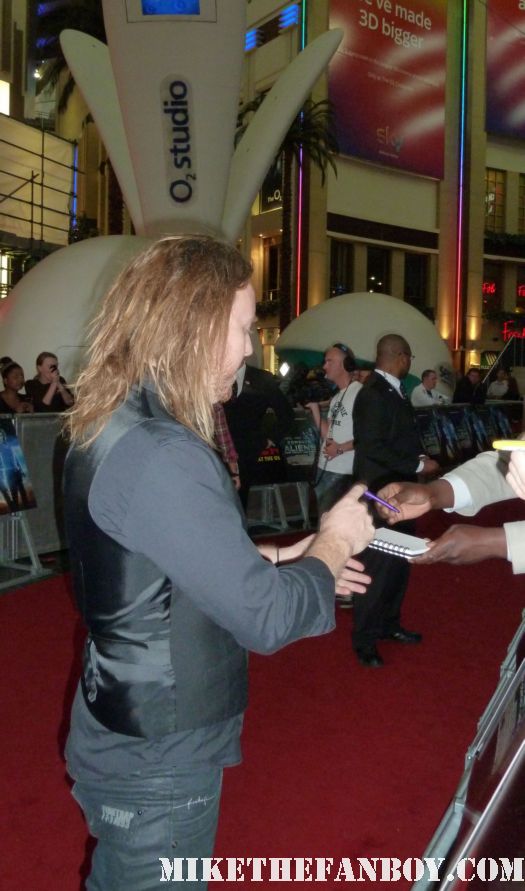 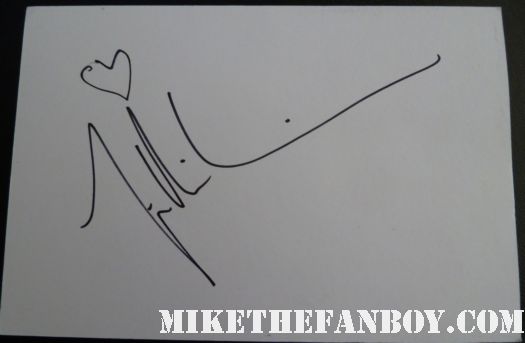 What an awesome day! See you next time!