Home / Big Mike • Q and A / Deep Blue Sea Q and A! Big Mike Gets His Fright On And Meets Thomas Jane! Autographs! And More!

What’s up, kiddies? Big Mike here with the scoop from the latest Fears & Beers night at Mann’s Chinese 6 Theatres. Fears & Beers is always a cool time. They play a classic flick from the horror genre mostly and you even get a free beer with your ticket. They usually have cast and/or crew from whatever they’re showing and it’s a very kick-ass evening.

I try and make it whenever my schedule allows and it’s always worth it. I’ve had some awesome times over the last year and a half attending these evenings. I was very greatful to make it to Friday the 13th Part VII: The New Blood with Kane Hodder, the late John Carl Beuchler and other cast members you don’t get to see too often. Add A Nightmare on Elm Street 4 & 5 to that list as well. A great portion of the cast came from part 4 including the two leads; Lisa Wilcox and Danny Hassel (they also came for Part 5 a couple months back) as well as producer Robert Shaye, who is the Sean Cunningham of the Elm Street series. There would be no New Line Cinema without Bob Shaye and Freddy Krueger. You really gotta make it out to one of these nights if you’re a horror fan.

This year marks the 20th anniversary of Deep Blue Sea and the movie still held up and is one of the better shark movies outside of the Jaws universe. (This one features 3 uber sharks, and not the driving kind of uber) It features a lineup of Saffron Burrows, Thomas Jane, LL Cool J, Samuel L. Jackson, Michael Rappaport and Stellan Skarsgard. Actor Thomas Jane was in attendance to talk aboot his experiences on this movie. Horror writer Brian Collins, author of Horror Movie a Day: The Book, was the moderator. 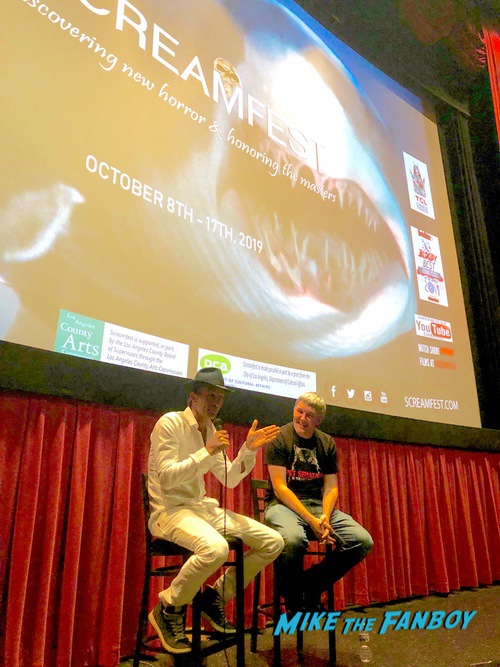 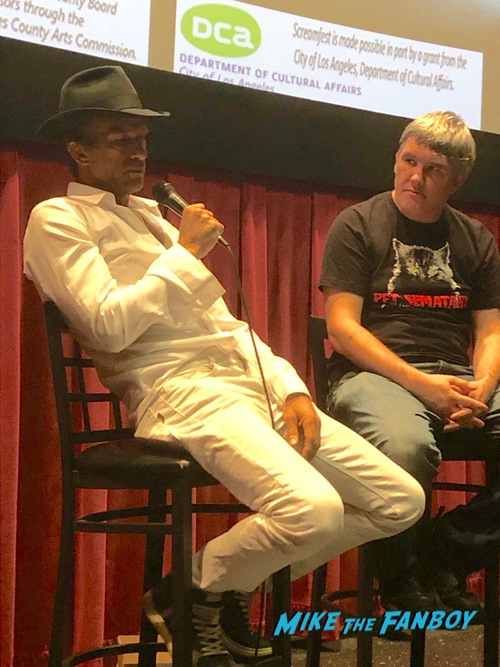 It was Tom’s first lead role in a movie and he said the studio was taking a chance with him because “really the movie is about fucking sharks.” It was an opportunity he couldn’t turn down and he owes his career to it. Tom was living in a small cottage practically underneath the 2 freeway just beyond Echo Park in Los Angeles and he was very greatful to get the role. Even if it did require having to work in lots and lots of water. Actors and actresses just love that. He mentioned getting something on his face he had to treat with hydocortisone from all the water in the tank. He was extremely chill aboot everything and says he still gets the rash thingy from time to time and calls it his “Deep Blue Sea Reminder”. “Everyone wanted to die first”, just to get away from the water. It’s tough being soaking wet all day and every day.  He did love the sets and thought they were really cool. A fond memory was the fake mechanical shark that was built. He thought it was really cool and he almost drowned being strapped to it for a scene on the very first take. Luckily, it started to work at the right moment and he lived. One of the things the dapper Thomas Jane remembered aboot seeing the movie for the first time was the audience reaction to Samuel L. Jackson’s last scene. He said you couldn’t hear the dialouge for aboot five minutes after the scene ended due to all the raucous cheering. The only bad thing aboot when the movie opened was it went up against Runaway Bride and the overrated Blair Witch Project. (It’s boring as shit, everyone. Deal with it.) 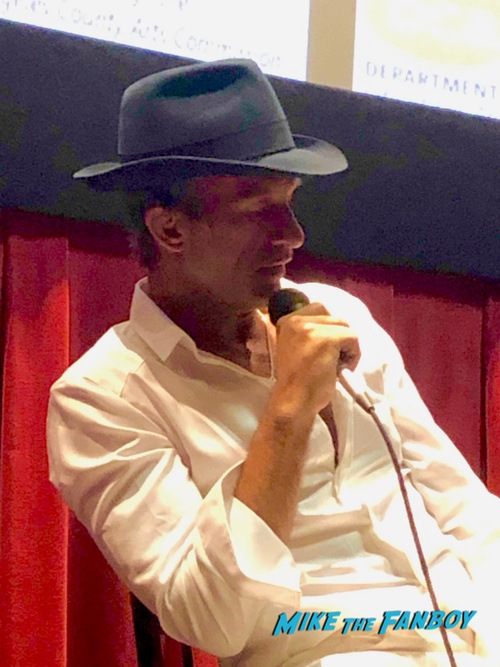 I was able to ask Tom which of the villains he faced was his favorite between the bugs in The Mist, the sharks in Deep Blue Sea, or the predators in The Predator. While I try not to be the star struck type I was thinking “Whoa, this is cool! Thomas Jane is looking right at me and talking to me on purpose and not telling me to get out of his way.” He chose the Predator due to nostalgic reasons of him and his buddies going to see the original (and still the best) when it first came out and loving it. It’s great to see when an actor or actress is very humble aboot their career and I have a new respect for Thomas Jane. After the Q&A Tom was cool enough to stick around and sign graphs and take pics with anyone who wanted one. Awesomeness. I got him on the Deep Blue Sea and The Mist cover pages in my “weathered” Fangoria book. Sweet. 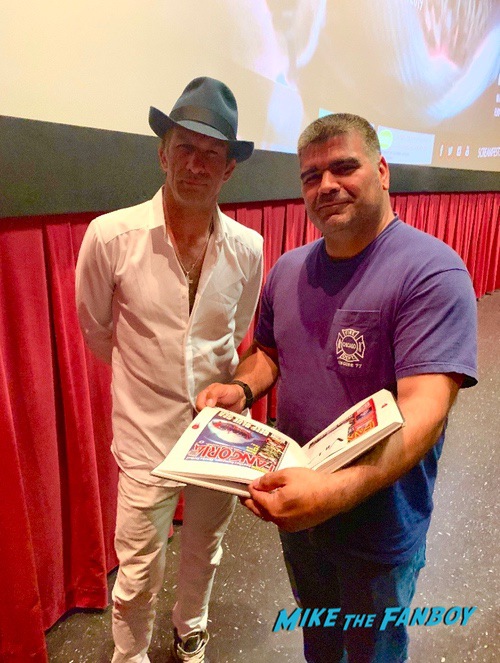 Thomas Jane has a nice lil’ library of movies for you to check out and hopefully you’ll enjoy. Also, if you get a chance follow Fears and Beers on the Facebook. They have a showing of The Crow coming up on June 5th with Bai Ling scheduled to attend at the Chinese 6 and the fourth installment of the Friday the 13th series with director Joe Zito and others tba coming to the Arhya Fine Arts in late July. Both should be a kick-ass evening. Get your asses there.