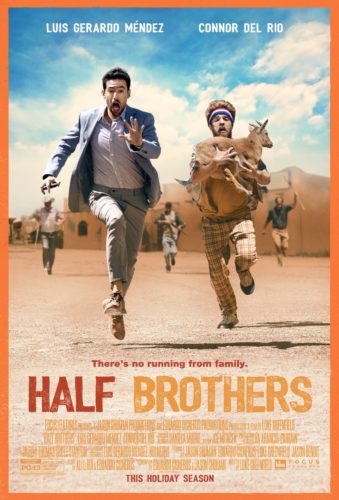 Sometimes you look at a title and wonder, did the filmmakers purposely go out of their way to make a half-ass movie inspired by the title on purpose? Despite a fun film directorial debut with “Let’s Be Cops,” Luke Greenfield’s gap is a staggering sidestep with a blistering, bumbling brother road trip movie called “Half Brothers.”

Mexican aviation executive Renato Murguia (Luis Gerardo Mendez) runs a successful private-jet company in the heart of Mexico and detests America’s excessive behavior. Days before his wedding to Pamela (Pia Watson), Renato receives word his long lost father Flavio (Juan Pablo Espinosa), who he’s not seen in 20 years, is on his deathbed and wants to see him one last time in Chicago. Renato rushes to America only to discover he has a younger American half-brother, Asher (Connor Del Rio), a social media obsessed millennial and a complete free-spirit. Flavio has one final request for his sons Asher and Renato to experience a road trip together, recreating the journey he experienced migrating from Mexico to the US. 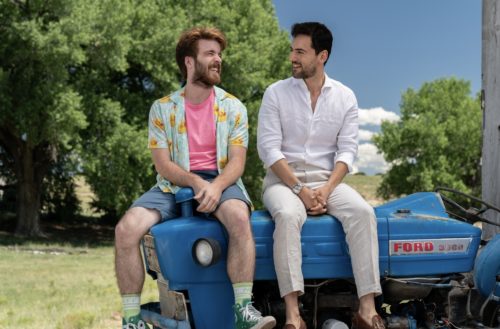 Sure sophomore slumps happen, but “Half Brothers” is one step forward, two steps back for Luke Greenfield considering his huge gap between movies. Now “Let’s Be Cops” isn’t anything groundbreaking or revolutionary, but “Half Brothers” is a peculiar picture to make for your second movie and waiting six years doesn’t help matters. Greenfield appears to lost his creativity and seems to be on autopilot of a mediocre comedy director, maybe someone whose directed 10 times as many films or a comedy director doing it for the “paycheck.” Surely, not someone who is making his second feature film. This lazy, lethargic script by Jason Shuman and Eduardo Cisneros certainly doesn’t help matters at all and feels like every run of the mill “odd couple” road trip film. “Half Brothers” is an unfunny, excruciating experience.

“Half Brothers” is “Twins” minus the action & comedy meets a telenovela. It’s a creatively-stifled buddy movie/road trip movie that somehow screws up sentimentality and comedy, which neither makes you laugh or cry intentionally. The film relies too heavily on a cliched culture clash of Mexican versus American, but despite so many fun factors (buddy film, road trip, different cultures, “comedy,” etc.), the terrible tone results in an uneven genre picture relying too much on the “odd couple” dynamic. The stupid stereotypes are ridiculously repeated and the moments of seriousness, like addressing immigration and Border Patrol, come out of leftfield making you question if these scenes were written and filmed for the wrong movie. 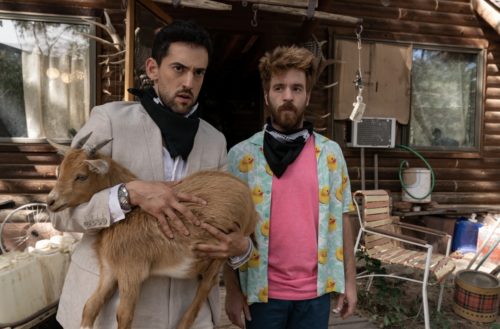 The blithering buffoonery throughout “Half Brothers” certainly might be occasionally amusing and great background noise, but nothing else. It’s like “Due Date” meets a Eugenio Derbez movie, but can’t quite figure out if it’s something serious or supposed to be hilarious. At most I was hoping for an entertaining bonding buddy movie, but neither Luis Gerardo Mendez or Connor Del Rio was even likable. Truthfully, as the movie went on I could care less about either performer/character. Not in a malicious way or in a complimentary way about their acting, but genuinely felt foolishly indifferent and questioning my own sanity for sitting through this terrible movie only the lowest common denominator would watch. For a film that’s barely 90 minutes long, this felt like a 3-hour Kubrick epic except without the entertainment. Unless you want a generic recycled road trip film and feel like a “half-whit,” look elsewhere.