Mad Men is one of the most critically acclaimed series that has ever hit the airwaves. Created by Matthew Weiner, Mad Men has just aired it’s midseason finale for it’s final season. it’s hard to imagine Don Draper saying his final goodbye but next year it’s something we will all face. 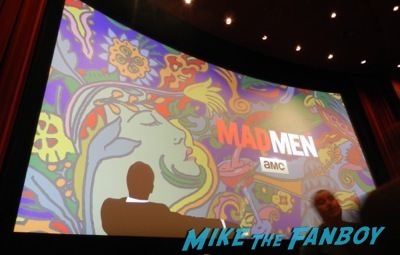 The cast got together last night for a q and a to talk about the series and what’s coming up for gang at SCDP. Suddenly Susan and I were lucky enough to attend. Joining Matthew Weiner and star Jon Hamm were January Jones, Elisabeth Moss, Vincent Kartheiser, John Slattery, Kiernan Shipka, Robert Morse and Jessica Pare. 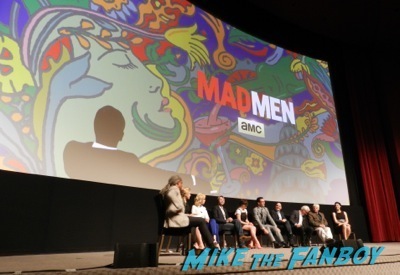 The panel was lively, the cast is just about to start filming on the two part series finale and seemed melancholy.

When talking about the ending of the season (spoiler alert if you haven’t seen it) Robert Morse talked about the final scene where his character came back from the great beyond. 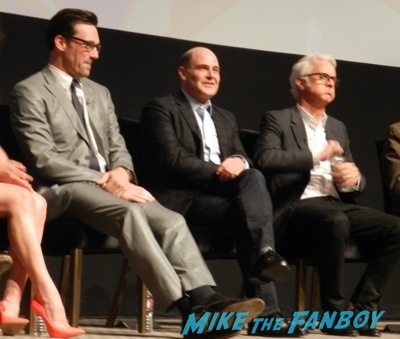 “Some actors say I don’t want to be there, get an extra. Jon was there for seven hours. It was a joy, I felt the back and forth we had. That’s a real gentleman.” Robert Morse Said.

“A lot of the cast came down to watch it, the writing team, the composer of course, there were special costumes, it was a big production.” Matthew Weiner said. 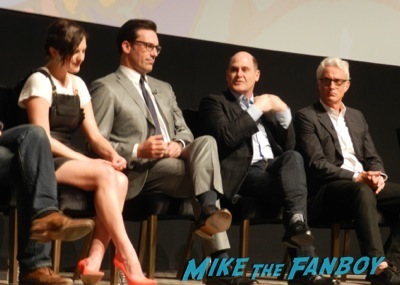 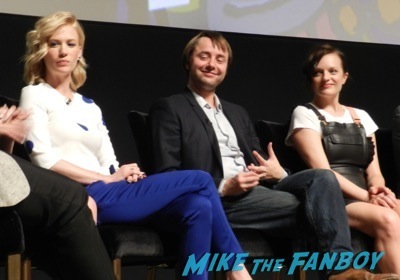 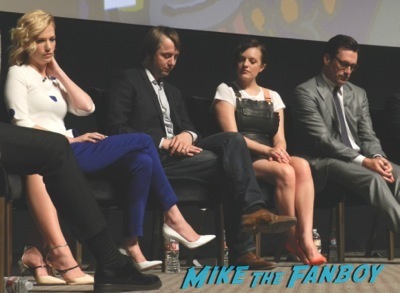 “Meredith is an amazing character and has some intentionally hilarious moments. I don’t know if she knows how hilarious she is. She’s a wonderful actress. It was a nice payoff.” Jon Hamm said. 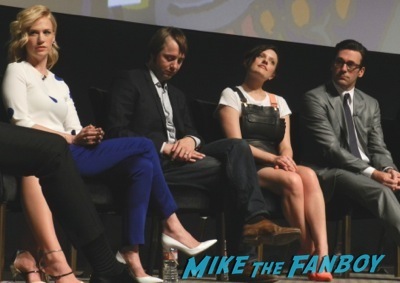 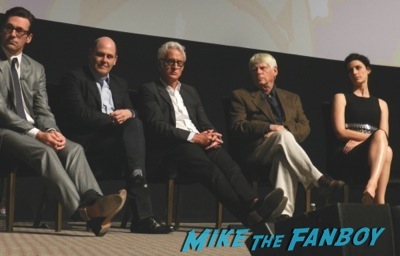 “It’s scripted but it’s also two different characters, in two different places with different things on their mind. Just her saying ‘I’m your strength’ in that Who from Whoville voice. She is the living embodiment of a muppet and I say that with kindness, she’s such a sweet person, but it’s not the right match.” said Jon Hamm.

“I joked with her that if it was six months earlier, she would be pregnant.” Matthew said. 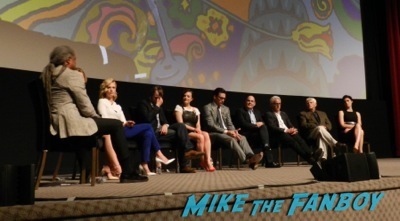 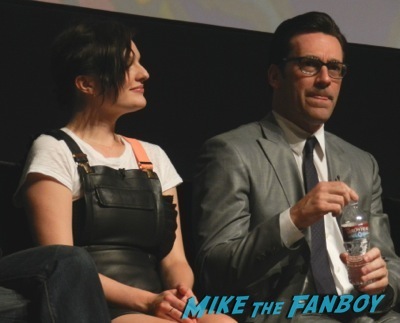 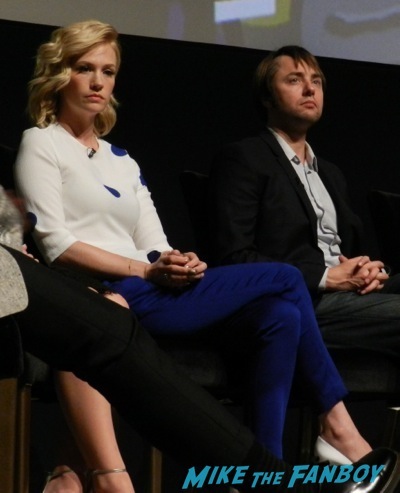 In that same episode Elisabeth had a great moment as well with Julio.

“I loved working with him, he was a really cute kid. You just put the camera on him and he was great. It was a little tough to figure out. I knew what I wanted it to be and we got to the same place. The thing about the show is that we’ve done it for so long, you can’t not hold onto that child and not feel emotional.” said Elisabeth Moss. 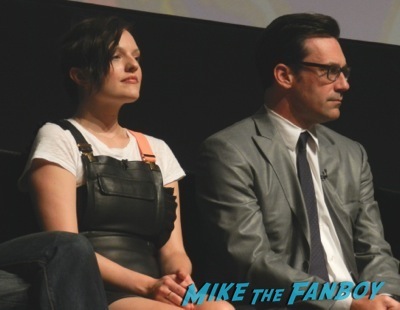 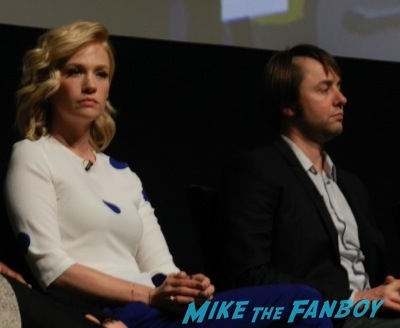 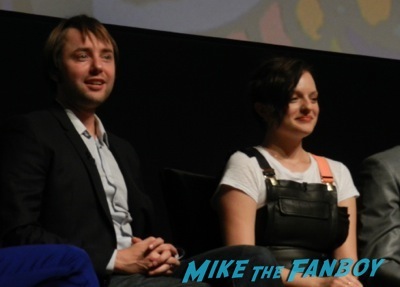 “It came from the writer’s room and everything was sort of reverse engineered from the Burger Chef pitched. And what are the elements of family for her.” Matthew interjected.

The episode also featured a big reveal from Don and Megan…

“When it becomes about them, it’s just a different story. They never actually say it.” said Jessica. 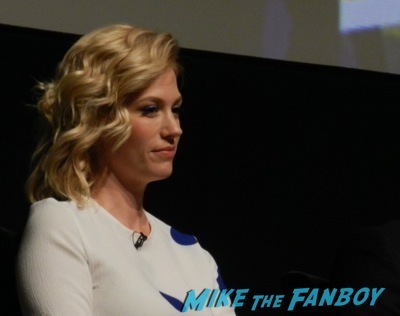 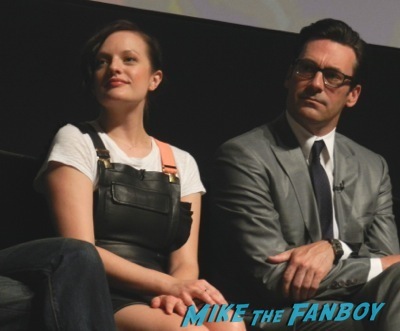 Talking about the end of the series is a sad subject…

“We all know that the end is getting close for us and we’re all participating in scenes that sort of catches you unaware. It’s emotional. You realized the finality of what you’re saying. It’s real for us to. We’ve been doing this for a long time and we’ve become really close.” John Slattery mentioned.

“They are some of the best auditions otherwise they wouldn’t have gotten the job.” Matthew Weiner Said, “I was nervous but it was great to go back in time. The characters are there that’s the incredible part.” 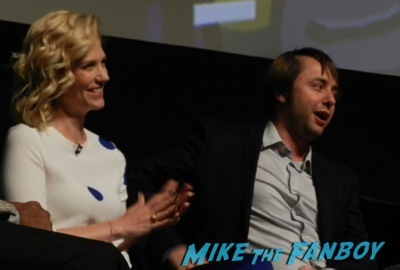 “I remember thinking, the picked the right people. Everyone was amazing. Everyone had longer hair, skinnier and were younger, but it was great to see how far we’ve come.” Said Jon Hamm.

“It was horrible!” Interjected John Slattery.

“(January’s) part in the pilot was only three lines, so I had to write a scene for Betty, so that was the first scene for the ‘show’ that I wrote.” Said Matthew

After the panel most of the cast rushed off. Like I said, as far as I know they had to shoot fairly early in the morning. January Jones bolted really fast as did Elisabeth Moss. Jon Hamm said that he didn’t have time to do photos, but he was happy to sign down the line. Creator Matthew Weiner signed my season 7 posters as did John Slattery. John Hamm made his way down the line and signed by season 7 poster and my season 3 poster as well. Kiernan Shipka left but came back to sign for everyone. She is super nice.

Then after the reception Kiernan Shipka and Matthew Weiner mingled with the guests. Jessica Pare then joined them where I was able to chat with her for a few minutes about how much I wanted Megan and Don to end up together. I also told her I still have hope they will make it. Jessica said, “Just keep watching.” She was very sweet. And I was able to get a horrible photo with her. Sigh. Ah well. My head is just gigantic. 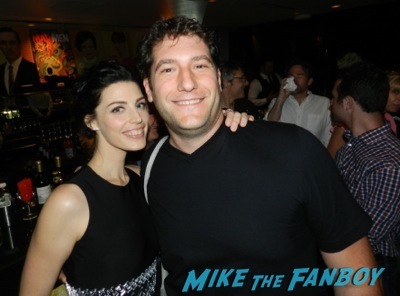 It was a fun night and both Suddenly Susan and I had a fine time. Until next time kids… 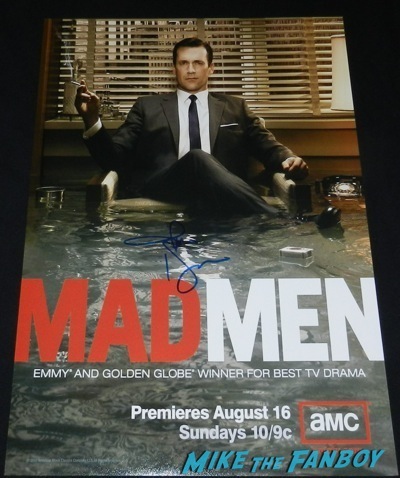 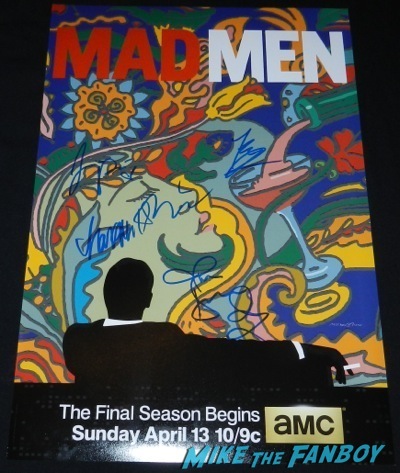