Home / Directors • Fanboying! / SO STOKED! I Finally Get To Meet Bound And The Matrix Directors Lana and Andy Wachowski At A Q And A For Cloud Atlas! Autographs! Photos! Mike Freaking Out!

To say I was stoked was an understatement. However, after trying for 45 minutes I couldn’t RSVP. Killed me!

So, I said why not go to the event and try to get the reclusive directors before the Q and A!

9:58 pm. – I just arrived. Now, I know the movie is clocking in around three hours, so I figure this is a decent time. There’s only one collector here so we shoot the shit waiting.

10:03 p.m. – The cool thing is that this venue pretty much only has one way in and out soooooooo… I should at least see them come in. Right?

10:09 p.m. – I have my Matrix mini poster, of course right? If you are going to get Lana and Andy Wachowski, you get them on The Matrix! But I also have my Bound mini poster as well. I love Bound. If you haven’t seen it, go rent it now. It’s a fun noir thriller with a 20 minute hardcore lesbian scene in the middle. I know… Random, but it’s true. The movie is amazing, and I remember seeing it for the first time and just falling in love with it. Plus, it stars Crystal Connors, I mean Gina Gershon!

10:13 p.m. – It’s getting pretty late… There are some people leaving the screening it seems like.. Oh wait, there a car… It’s Lana and Andy Wachowski! Any is first and starts signing for a guy who just walked up and the other collector. Lana walks right over to me as Andy is signing and I hand her a pen. She asks my name, and I’m like Mike! I probably was a tad overenthusiastic. Lana wrote a thought bubble coming out of Keanu’s mouth and signed the poster so beautifully. 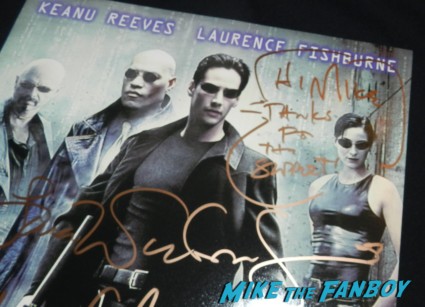 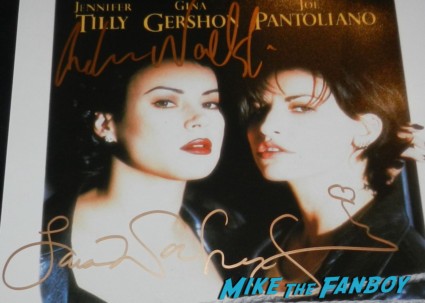 Then I asked Andy if he would mind if I got a quick photo and he was like sure, “but we’re running late so we gotta make it quick!” Andy called Lana over and was like, “Let’s do a photo!” Then Lana was in the middle and Andy was like, “No.. No.. you have to be in the middle!” lol… 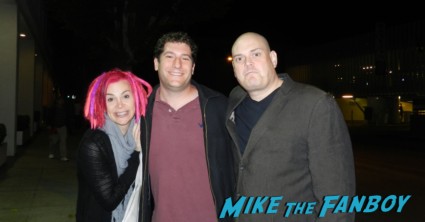 So frakkin’ nice! I honestly love meeting directors! To me sometimes it’s even better than meeting the “actors.” Directors craft the film they decide the direction, let’s be honest, The Matrix, would not be The Matrix without Lana and Andy Wachowski. Just like Moulin Rouge! would not be Moulin Rouge! without Baz Luhrmann! So, to me it’s such a thrill to meet the people behind the lens! 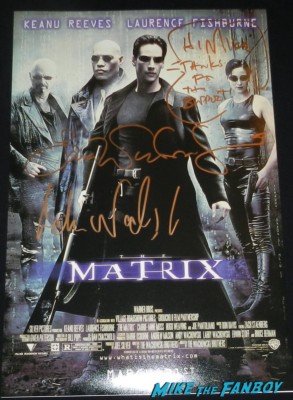 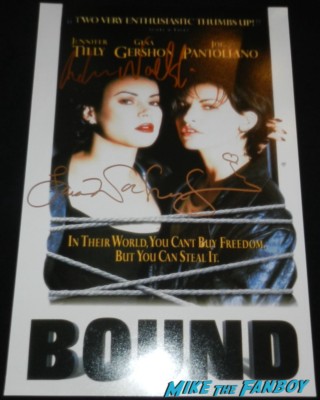