The awesomeness of Jessica Chastain. I swear it should be a new column here on MTF. I sincerely hope that she stays that way as the awards surely pile on.

Also, it’s so good to hear from Big Apple Elisa! I feel like it’s been forever since we heard from her! To be fair, Elisa has been having some computer issues, lol…

Anyway, Elisa heard a rumor that the Downton Abbey cast was going to make an appearance at Dan Stevens and Jessica Chastain’s play The Heiress. Elisa was at the performance and met the cast after!

I’ll be honest, I stage doored Broadway’s The Heiress a couple of times prior to seeing the show. Usually it was with friends after they’d seen the show or I was bored and wanted to go see awesomely talented people. OR because I really wanted to try to meet David Straithairn since he rarely (never) stops/signs after the show.

Well, when Hugh Bonneville tweeted about their being a surprise for Downton Abbey fans on the Tuesday evening of the week I knew them to be in NYC, followed by a very similar tweet by Dan Stevens…I knew I had to go. Thanks to a great friend, Mauli, we secured FRONT ROW student rush tickets. I’m such a big fan of Mr. Straithairn, Ms. Chastain and Mr. Stevens so I was THRILLED to have the chance to finally see the show.

We got to the theatre about a half hour early, heading to our seats; I turned around looking around the theatre for any sign of the crew. Eventually, I notice Mr. Bonneville and Elizabeth McGovern in their seats. I also notice Colin Farrell farther down their row. Jim Carter (Carson), Robert James Collier (Thomas), Joanne Froggatt (Anne) and Sophie McShera (Daisy) eventually join the Granthams. Further up, I noticed Victor Garber. What an audience. We all settled in for the show.

Now lately, I’ve been a fan of plays more than musicals. Not sure why. So, I ended up really enjoying The Heiress. I know others have said it’s a bit long but it never felt that way to me.  And to see the incredible performances by the entire cast, up-close was an unbelievable experience. Mr. Straithairn’s Dr. Sloper was perfectly loathsome and pitiful yet strong and Judith Ivey was fantastic as the affable Aunt Lavinia, the go-between for everyone. Mr. Stevens was adorable as the conniving young Morris. And there are hardly words to describe what I thought of Jessica Chastain’s performance. Her plain and feeble character was so unlike that of what I’d seen at the stage door and I was in awe. Seeing them all in person as opposed to on screen was pure pleasure!

There is a talk-back being held after the performance and we’re unsure about staying or going. So we decide to sit in the theatre as they prepare. They bring up the curtain and the whole DA cast are on stage with Dan Stevens. Haha! They look caught of guard and quickly begin to head out. So Mauli and I run outside, along with all the other fans who stayed inside.

When we get out there, there’s a large crowd, as always. The DA cast slowly trickles out. We manage to somehow miss Elizabeth McGovern. Jim Carter stops as I ask him to sign my Downton Abbey poster. He says “That’s more like it!” and smiles at me as I thank him. He signs for Mauli and heads to join Ms. McGovern. James, Joanne and Sophie come out not much long after and they all stop to sign the photo I had printed of The Lovely Erica, Me and the group! Sophie jokes, “Wow you guys are fast.” Haha. They are all rushed away by their handler. But we succeeded in acquiring who we need. I still don’t have Dan on my poster so we both stay and wait for him to come out. 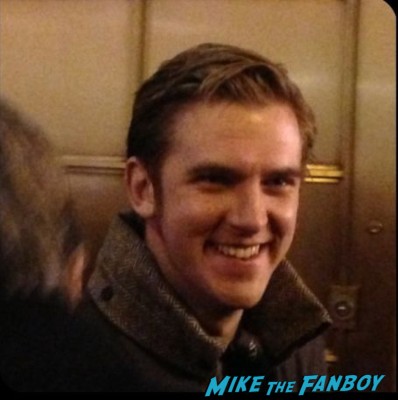 Plus, I can’t just not stay for Ms. Chastain. 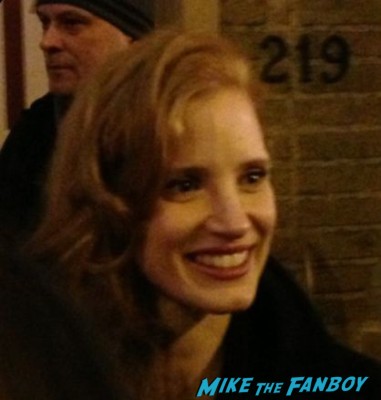 They are always SO kind to everyone waiting, making sure they stop for everyone and if someone is skipped they go back to them. For people of their caliber, I’m just so impressed. 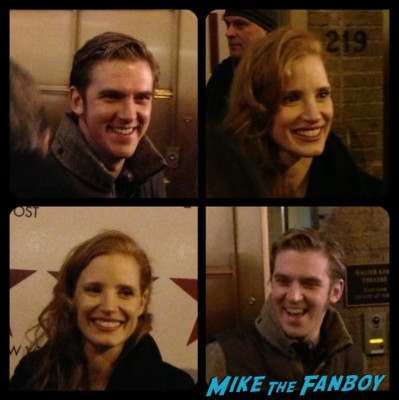 Don’t miss seeing The Heiress at the Walter Kerr Theatre! The limited engagement ends February 10th. Amazingly enough, Jessica Chastain has been flying back and forth to LA for the various awards shows and missing as few performances as possible. Three so far with the forth coming the 27th of January for the SAG Awards. She’s incredible.

And the third season of Downton Abbey has begun on PBS every Sunday. Check your local listings for times! 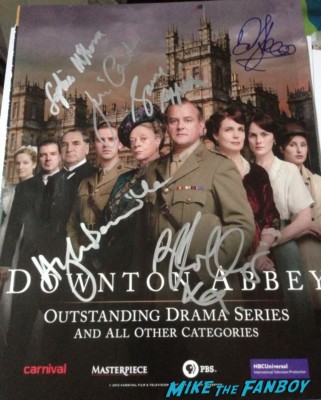